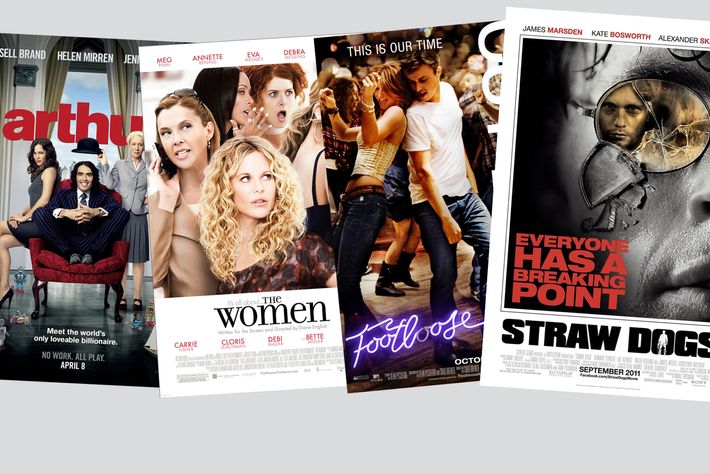 Vulture has long been your source to explain what’s going on in Hollywood. Now we’re proud to introduce a new columnist for the site who knows exactly how the town works, because he works in it every day: Gavin Polone. An agent turned manager turned producer, Polone formed the production company Pariah in 2001, which has brought you such movies and TV shows as Panic Room, Zombieland, Gilmore Girls, and Curb Your Enthusiasm. Savvy and unapologetically outspoken, he’ll be bringing his opinions on all aspects of the business to Vulture in a new feature called Making the Sausage.

The total box office is down 4 percent from 2010 so far this year, but the film industry should pay closer attention to a far more revealing and damning number: 2011 looks to have the lowest number of actual tickets sold since 1996, according to Nash Information Services. The only reasons the drop in overall grosses has been held to single digits are 3-D surcharges and general ticket-price raising, because make no mistake, the film audience is shrinking dangerously. Most people I talk to say they aren’t going to theaters because “there isn’t anything to see.” When I probe deeper I learn that they actually mean, “Everything seems like something I’ve already seen.” The marketplace has been stocked with an ever-growing collection of rereleases, sequels, and remakes, thanks to an entertainment industry that suffers from a condition I’ve named corporatephagia. This is the entertainment industry version of a behavior evidenced by my dog, Joey, that’s called coprophagia: He decides that a meal he has previously enjoyed can be appreciated again once it has been processed through his system and emerged out of the opposite end from which it entered.

As I know from personal experience, film executives — most of whom use terms like content, brands, and franchise when talking of potential film projects — are directed by their bosses to mine the studio’s libraries for remakes. On numerous occasions, I’ve been told by grasping and desperate execs to take a look at their catalogue and come back to them with ideas on how to remake something. The motivation for studios to focus on their own film libraries for ideas is that they’re the greatest hard asset they possess: The last few studios to change hands (Miramax, MGM, and DreamWorks) were priced solely on the value of their libraries, with no credit given for their actual moviemaking infrastructure. Since home video revenue has cratered during the past few years, deriving revenue from those older titles through other means than selling ancillary viewings is imperative if the studios don’t want to write down the value of their assets. When a studio remakes one of its own forgotten or fading films, it implicitly boosts its value, which then in turn helps boost the studio’s total worth. And that’s how we end up with remakes of The Omen, The Poseidon Adventure, The Women, The Stepfather, Halloween, The Taking of Pelham 1,2,3, Race to Witch Mountain, The A-Team, Fame, Fright Night, Conan the Barbarian, Land of the Lost, The Mechanic, Arthur, The Green Hornet, and now, Straw Dogs. Sure, not all of those releases were commercially unsuccessful, but it doesn’t mean they were good. After paying for a ticket to those films, many viewers were left with the same feeling I get when my dog Joey tries to lick me after partaking in his self-generated snack. (Are there any of my potential employers whom I haven’t pissed off with that last sentence?)

Last weekend was emblematic of this affliction. A 3-D rerelease of The Lion King led the weekend’s box office while a remake of the classic and influential film Straw Dogs bombed miserably. The Lion King makes some sense; in the years before DVD, Disney always rereleased its animated classics for a new generation, and the 3-D upgrade gave young families an added excuse to leave the house. But remaking Straw Dogs, which is probably one of the 100 best films of all-time?

A remake is an understandable, maybe even good, idea when the filmmaker brings something new to it. The digital technology used in Rise of the Planet of the Apes allowed for a more realistic rendering of the eponymous characters. Though I loved and watched all of the original Apes films over and over as a kid, those rubber masks worn by Roddy McDowall and the others were ridiculous. Tim Burton’s 2001 attempt was faithful to the original, using better makeup and offering more production value, but the apes still looked like actors in suits. They didn’t seem real, and the movie was boring and forgettable. In Rise, the apes looked like apes, creating greater separation, thematically, from the human characters, and making for a more interesting and inspired story. And when the Coen brothers remade True Grit, they hadn’t even seen the 1969 John Wayne version; they based it solely on Charles Portis’s 1968 novel, which was far darker and often hilarious.

Conversely, the 2006 rehashing of The Omen was so similar to the 1976 original that David Seltzer, the screenwriter of the first film, received sole screenplay credit from the Writers Guild of America, despite not having worked on the latest version at all. The billing block for the latest Straw Dogs includes a “based on the movie by” credit rarely seen in a film; the original was based on Gordon Williams’s novel The Siege of Trencher’s Farm, but there’s no mention of that source in Straw Dogs ‘11, just as, on the other hand, the credits of the Coen brothers’ True Grit cite Portis’s book, not the previous picture.

Going to the movies is a habit that has been ingrained in our culture for close to a century. But however difficult it might be to imagine American leisure without the staple of theatrical films, it could happen once seeing a film stops being special. The movie studios have overvalued spectacle when gauging what drives people to spend time and money to go to the cinema. Yes, dazzling visual effects may be attractive, but not in the same way that original stories and characters can be, and at a much lower cost.

The making, marketing, and distribution of filmed entertainment is a business. But unlike inventing a nuclear breeder reactor or making a resin chair out of recycled Coke bottles, it’s also an art. And if people continue to feel that there is nothing creative and original to see at their local multiplex, they’ll find other things to do with their time and the bond between the audience and the experience of going to a movie will finally be broken. And so will one of the few industries in the world where America is still the undisputed leader.

Related: One in Three Films Next Year Will Be Based on Unoriginal Material

Producer Gavin Polone on Why Remakes Are Killing the Movie Business

sir this is your place of work 29 mins ago
Sean Bean Says Intimacy Coordinators ‘Spoil the Spontaneity’ of Sex Scenes By making them a “technical exercise.”
health 2:01 p.m.
Lars von Trier Diagnosed With Parkinson’s Disease The Danish director is “in good spirits and is being treated for his symptoms.”
all up in your mind 2:00 p.m.
Beyoncé Cuffs It (Her Seventh No. 1 Album) With Renaissance Plus her eight No. 1 song as a soloist with “Break My Soul.”
box-office beatdown 1:20 p.m.
Top Gun: Maverick Sinks Titanic at the Box Office Next goal: a reference in the spoken-word section of a Britney Spears song.
overnights 12:58 p.m.
Flatbush Misdemeanors Recap: Too Legit to Quit Dan still has a bit to learn about how to control the classroom, but there’s hope for him yet.
vulture 10x10 12:31 p.m.
The Diva Puzzle 8-Across, Nine Letters: Broadway musical that will soon star Lea Michele.
last night on late night 12:29 p.m.
John Oliver Kinda Feels Like HBO Is Being Burned Down ‘for the Insurance Money’ “Hi there, new business daddy.”
the pynk 11:34 a.m.
Tina Snow Drives the Boat All the Way to P-Valley Megan Thee Stallion’s alter ego makes a guest appearance on the hit Starz drama.
overnights 11:02 a.m.
90 Day Fiancé Season-Finale Recap: The Big Days This is perhaps the most boring happy ending to a season we’ve ever seen on this show.
a long talk 9:00 a.m.
TDE President Punch: ‘I Understand the Backlash’ But he’d still like to correct the record on long-awaited albums from SZA, ScHoolboy Q, and Jay Rock.
overnights Yesterday at 11:01 p.m.
P-Valley Recap: Welcome to the Stage Ms. Tina Snow Megan’s Tina Snow fits right in at the Pynk as her character takes the stage with Lil Murda during the re-re-re-opening of the club.
overnights Yesterday at 10:00 p.m.
Westworld Recap: Murder Me a Little All of the characters are in the same time and place! What a concept!
overnights Yesterday at 9:00 p.m.
Becoming Elizabeth Season-Finale Recap: The King Is (Almost) Dead Mary is so close to the throne. And yet …
overnights Yesterday at 9:00 p.m.
The Real Housewives of Atlanta Recap: Mrs. Worldwide Welcome to the party, Ms. Burruss!
jinkies Yesterday at 8:03 p.m.
Scoob! Holiday Haunt Filmmakers Recorded the Score for Their Canceled Movie Hey, if the musicians were already paid for …
you know nothing Yesterday at 6:11 p.m.
Everything We Know About the Game of Thrones Prequel House of the Dragon So Far The official trailer for the long-awaited HBO prequel is here.
utopia Yesterday at 3:25 p.m.
A Timeline of Travis Scott’s Post-Astroworld Public Return He will perform a Las Vegas nightclub residency, “Road to Utopia,” beginning in September.
callouts Yesterday at 3:09 p.m.
Mike Tyson Says Hulu Is the ‘Streaming Version of the Slave Master’ He claims that the streamer’s series Mike stole his life story and did not pay him.
overnights Yesterday at 3:07 p.m.
Love Island Recap: That’s My Boy Ekin-Su urges Danica to tell off Billy, a true chaotic evil.
in your area Yesterday at 1:28 p.m.
Blackpink Celebrates 6th Anniversary by Finally Dropping a Comeback Date Sink your teeth into “Pink Venom” on August 19.
More Stories