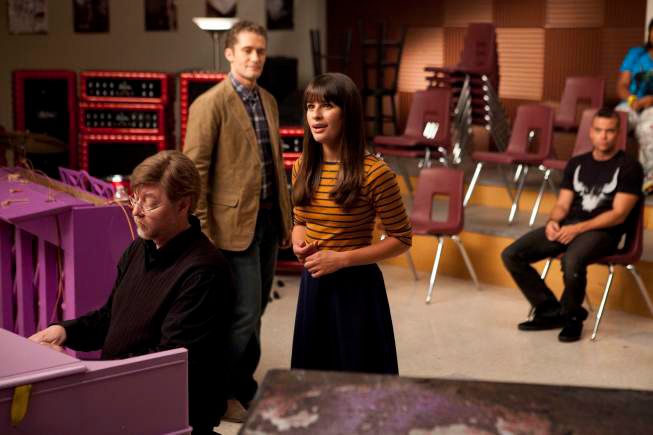 Glee’s second season didn’t end with much of a cliff-hanger. After a treacly hour of one-dimensional New York worship and super predictable, if mid-performance, French-kissing, the glee club did not win nationals. (They need something to do this season, after all.) The finale was in keeping with what had come before: Season two was pretty uneven! And yet here I am, starting season three, with hope in my heart, because (1) I am not a quitter, (2) I still believe in these crazy kids, and (3) I will watch anything until the end of time in which Brittany is hanging around and saying stuff. I would not joke about Brittany. So let’s do this.

It’s day one of a new school year at McKinley High. Finn is still boring. Kurt is still confusing “gay person” with “half-finished Project Runway menswear challenge mannequin.” Rachel is still “not 29.” Quinn can’t be in glee club or cheerleading anymore because she’s too busy hanging out under the bleachers being goth and terrible because of emotions. Sam is off the show (bye-bye, mildly interesting Mercedes love-connection subplot), and Zizes abruptly quits choir and breaks up with Puck for no reason (I guess his tongue is needed elsewhere). Mr. Schuester and Emma are co-habitating and sleeping in the same bed, but not having sex on the regular. Maybe that’s because Mr. Schue says things like, “Guess who woke up right before I did,” in reference to his boner. Everyone is borderline suicidal because they placed twelfth instead of first in nationals, making them “the laughingstock of the show choir world,” even though there is obviously no such thing (one cannot be the laughingstock of an industry stocked entirely with laughs).

Mr. Schuester decrees that it’s time to recruit some new glee club members. Apparently, we are told, the entire McKinley student body wants to murder the glee kids for not winning nationals, because everyone knows that high school students both care about what other students are doing and passionately follow national show choir rankings. Fortunately for everyone (and the very future of music), Mr. S has it allllll figured out. You see, he’s recently come into possession of a large collection of hideous purple garbage pianos, which he places artfully around the school, instructing the glee clubbers thuswise: “Whenever you see one, no matter what you’re doing, I want you to sing a song.” No matter what you’re doing. Quiet time in the library? W-evs, nerd! Time to sing! MLK assembly? SING, GODDAMNIT. Running from a deadly chemical fire? Might as well sing — someone left a garbage piano blocking the fire exit. Oops, you’re dead now! Then, logically, glee club enrollment will skyrocket. Garbage pianos are the only way.

Meanwhile, in a ploy to make Sue evil again (since she spent the end of last season crying and giving out adorable hugs), and to try and make Will a three-dimensional character — he has so much Sue-rage he will launch a war! Involving glitter! — the show sets her up on a hilarious Congressional run. (“Sue just passed ‘Undecided’ and ‘Anyone White’ in the polls.”) Voters, Sue reasons, vote for candidates who take stances on things, so she strategically positions herself as pro-anti-arts education. Sue wants to dismantle the arts entirely, starting, obviously, with the glee club and their stupid, stupid pianos. Boom. Evil!!!

Except, ummmmm, side note: I really have to side with Sue Sylvester on this one. Arts funding is completely out of control in the school district of Lima, Ohio. Does any other program get any funding at all? Oh sorry, computer class, we needed $15 million to outfit every glee club member with a wireless microphone for spontaneous jamming and infrared body glitter for night pizzazz. But we got you these two cans and a string! (JK, it’s just one can — times are tight.) Oh, and we rented out most of the tenth grade to a medical research facility to pay for this Auto-Tune force field dome that hovers over the school — sorry about the chancres, sophs! Home-Ec is just a Will-Work-for-Food sign-making class. Math class has been downgraded to just Not Being Outside. But it was worth it, because the glee club had an 80-piece hologram orchestra to back up their rendition of “Fergalicious.” VOTE FOR SUE, YOU GUYS.

Anyway, at this point, with some reservations, Santana declares for “Team Sue,” a betrayal that is important for about fourteen seconds until Mr. S kicks her out of glee club at the end of the episode for obvious turncoatiness. Then someone suggests that the glee club should try believing in themselves and everyone gets a big boner. Boi-oi-oinggg!!! Time for the first musical number!

It happens in the lunchroom and it is the Go-Gos’ “We’ve Got the Beat.” The glee clubbers climb up on the tables and dance around using their feet (people EAT there, you guys!!!), while singing in a medium-adorable manner. The rest of the students, who will hate the glee club for being slightly worse than eleven other glee clubs, go bonkers with rage. The glee song is so terrible to their ears that they attempt to pelt the singers with spaghetti until they are dead. This is what is known, in showbiz, as a “food fight.” (Science fact: Food fights are not real.)

Hey, look, a new character! Her name is Sugar, she has “self-diagnosed Asperger’s” (that’s a good bit!), and she wants to audition for glee club. For some supernatural reason, Sugar is not affected by the McKinley Auto-Tune force field dome, so her voice sounds like what an actual average human voice sounds like (that is: gross). Now Mr. S is in a pickle, because apparently he has zero grasp of the concept of an audition: “We have always had the policy that anyone who tries out gets in.”

Meanwhile, Kurt and Rachel are all excited about the musical theater program at some vague NYC arts school that is made up (probably the school Ryan Murphy was going to set the Glee spinoff at, the one that caused the whole “Lea Michele, Chris Colfer, and Cory Monteith are leaving, no they’re staying” brouhaha this summer). They are certain that a duet of “Ding Dong the Witch Is Dead” is their ticket to big sunglasses and conceited pizza and the Lower East Side. This number is adequately cute, except when Rachel does wacky voice. I do not like it when Rachel does wacky voice.

Kurt then changes into human clothing (BOOOOOOO) for his drama school audition. He and Rachel show up all cocky like they own the place, only to immediately get schooled by a wayward pack of theater geek stereotypes. The ringleader (who was, in real life, a contestant on this summer’s The Glee Project), informs them that she is the actual grown-up Gerber baby (funny!) and has been acting since she was a fetus (“My sonogram was in an episode of Murder, She Wrote”). Then they sing a song — a surprisingly strong, traditional, and non-overproduced “Anything Goes”/“Anything You Can Do I Can Do Better” — while Rachel and Kurt sit and gawk and cry. Back in the car, Rachel weeps: “I’ve never been so humiliated in my life.” Really?? Why?? All you did was sit there while they sang a song! You guys sing way more elaborate and equally competent arrangements four to five times an episode! This is a thing that drives me crazy about Glee. As a viewer, there’s no knowing whether a performance was “good” like “Anything Goes,” or “bad” like “We’ve Got the Beat,” until Rachel starts crying or some cheerleader starts throwing spaghetti.

Rachel and Kurt cry for a while about not being as good at singing as the Gerber baby. But just when Rachel is deciding that they have to move to another town and change their names and wither away and die doing community theater, Kurt convinces her to never give up. Then they pinkie-swear over the only dialogue of the night that seems as though it could have been delivered by real people. It’s nice they’re friends, even if it’s only temporary.

Finally — FINALLY — we get to the moment I’ve been waiting for, which is when Brittany shows up and says a hilarious thing. (Rachel: “For the school musical, I think we should do West Side Story.” Brittany: “Is that the one with the cats?”) Then there’s a super anticlimactic closing number from Hairspray, the Musical, about how you can’t stop the beat. Then the beat immediately stops and the show is over. See you next week.

fight club 7 mins ago
Chuck Palahniuk Is Fine With Chinese Censorship of Fight Club, Actually The Chinese ending is actually closer to the book.
extremely online 5:14 p.m.
We Asked Linguists Why People Are Adding -Ussy to Every Word A calzone is a pizzussy. A wine bottle has a winussy.
allegations 3:14 p.m.
Bill Cosby Calls We Need to Talk About Cosby Director a ‘PR Hack’ He also denied all claims against him.
lime crime 2:50 p.m.
Did Dakota Johnson Lock People in a Blue Bottle Coffee? An Investigation. Blog Day Afternoon.
podcasts 2:13 p.m.
It’s the End of an Era for Radiolab After nearly two decades, creator Jad Abumrad is stepping down from the highly influential audio series.
videology 1:53 p.m.
Grimes Brings Blackpink’s Jennie, Dorian Electra Into Her Metaverse We think, anyway, in the “Shinigami Eyes” video.
things to look forward to 1:25 p.m.
HBO Releases My Brilliant Friend Season 3 Trailer, Amici We’re going back to Naples this February.
this month in comedy podcasts 1:00 p.m.
This Month in Comedy Podcasts: Taylor Tomlinson’s Sad in the City Rounding up our favorite comedy podcast episodes of the month.
the lads are fighting again 12:21 p.m.
Morrissey Wants Johnny Marr to Cease and Desist, Bitch “Must you persistently, year after year, decade after decade, blame me for everything?”
vulture 10x10 12:00 p.m.
The Ungodly Puzzle 27-Across: This is what it sounds like when doves cry.
late night 11:55 a.m.
Meet Lou Wilson, Jimmy Kimmel Live!’s New Announcer We spoke with the comedian about his fancy, brand-new late-night gig.
overnights 11:50 a.m.
The Book of Boba Fett Recap: A Very Special Guest Star Wait, did we turn on the right show?
allegations 11:45 a.m.
Director Amy Berg Says She Was Stalked Online While Making Phoenix Rising “There’s a lot of like online stalking in that world, the Brian Warner world, so we had to take a look at that.”
deaths 11:18 a.m.
Peter Robbins, Charlie Brown Voice Actor, Dead at 65 He played the character in beloved specials like A Charlie Brown Christmas and It’s the Great Pumpkin, Charlie Brown.
get naked 8:00 a.m.
Could John Cameron Mitchell’s Joyfully Sexual 2006 Film Shortbus Get Made Today? It didn’t fake the sex, and I was at the tryouts.
last night on late night 1:52 a.m.
Nicole Byer Has a Lot of Questions About Spider-Man “What plot point brought [Jamie Foxx] to look like that?”
actors on actors 12:47 a.m.
Bradley Cooper ‘Didn’t Give Up on Acting’ Thanks to Paul Thomas Anderson “He was teaching me all about lenses, things I never knew.”
theater review Yesterday at 10:52 p.m.
A Speed Date With Long Day’s Journey Into Night Cut from three and a half hours to two, and TB traded for COVID.
overnights Yesterday at 10:01 p.m.
This Is Us Recap: Jack’s Mom In what may be the last stand-alone Jack episode, Milo Ventimiglia has never been better.
lightning strikes Yesterday at 9:52 p.m.
Percy Jackson’s Author Blesses Disney+ Adaption: ‘We’re in Great Hands’ Percy Jackson and the Olympians has been picked up to series.
More Stories