I Am Unicorn
Season 3 Episode 2 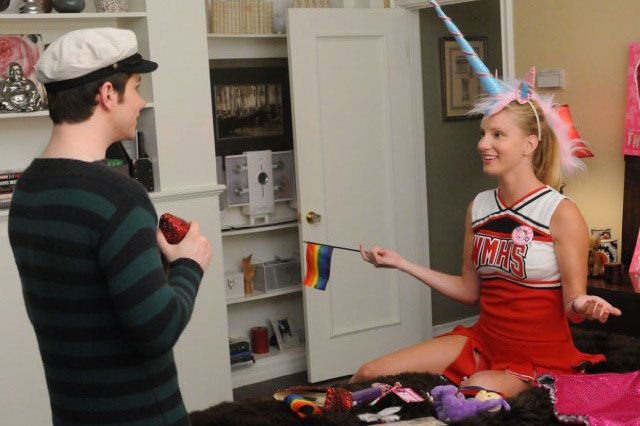 “When a pony does a good deed, he gets a horn and he becomes a unicorn, and then he poops out cotton candy until forgets he’s magical, and then his horn falls off. And black unicorns, they become zebras.” —Brittany

Good morning! Episode two starts off strong-ish, with a promising combination of my two favorite things: Kurt wearing stuff and Brittany saying stuff. Specifically, Kurt is wearing two delicate enamel brooches shaped like mallards in flight. Mallards! Enamel!!! And Brittany is saying that she would like to be Kurt’s campaign manager for his presidential run (to refresh: In the last episode, Rachel convinced Kurt that he needs to get elected class president to pad his application for musical theater college, because there’s nothing musical theater college admissions fat cats care about more than the fake politics of children). Brittany explains to Kurt that she believes in his campaign because he is “the biggest unicorn” of all the kids in school, and by “unicorn” she doesn’t mean “gay guy” — what she really means, she explains, is “person who believes in himself [even though he’s a gay guy].” Then, as her “campaign strategy,” she makes one billion pink posters that say “KURT HUMMEL IS A GIGANTIC GAY GUY!” (I’m paraphrasing) and puts them all over school. Kurt is enraged, mainly because his other story line in this episode is about trying to be less of a gay guy (more on that later). The mallard brooches decline to comment.

Personally, I don’t give one fleecy pink unicorn turd who becomes McKinley’s class president (I nominate Mallard Brooch!), but I do care a lot about these bonding moments between Kurt and Brittany. Because — let’s be real — if those two had a spinoff where they move to the Big City and become factory workers or beat cops or emotional doctors or one messy roommate and one clean roommate, I would fly to Amsterdam and marry my TV in a small, tender ceremony.

Really, though, their relationship in this episode is genuinely sweet. Brittany believes in Kurt the Unicorn in ways he doesn’t — she sees his unicorn-ness as an asset in the election, not an obstacle — while Kurt (still shell-shocked, I think we’re to assume, from the Great Prom Queen Debacle of 2010) is determined to pass for Kurt the Horse. But nobody wants to vote for some fake-ass closeted horse! Right!? Politics 101! He needs to let that horn grow! Or something! I think I’m losing track of my metaphor here, but you know what I mean. Adorable.

Lastly, I will allow it this one final time because BRITTANY IS MY WIFE (Dutch law is cool with it), but enough with the unicorns, everybody. Even centaurs are borderline played out at this point. Have some self-respect.

“In college I was in A Funny Thing Happened on the Way to the Forum. I played the Forum.” —Coach Beiste

So far, season three appears to have abandoned glee clubbing for musical theater. With the exception of a nothing subplot in which Mr. Schue forces half of New Directions into a remedial after-school box-stepping course (watch Finn attempt to convey angst!), everyone is consumed with this year’s production of West Side Story. Also, all three songs in this episode are ancient musical theater chestnuts: “Somewhere” and “Something’s Coming” from West Side Story and “I Am the Greatest Star” from Funny Girl. (Last week it was Tom Jones and the Go-Gos — if next week’s ep doesn’t contain at least one kitschy choral arrangement of a current Top 40 pop song, I predict the teens are going to start setting Dumpsters on fire.)

Since Mr. Schue is too busy doing a jazz square over and over again and yelling “SEE!?” in Finn’s face, he taps Ms. Pillsbury, Coach Beiste, and Artie to direct the musical. Kurt desperately wants to play Tony, but though Ms. Pillsbury reveals that she “would love to be held in Kurt’s toothpick arms on my fire escape” and Artie is a believer in nontraditional casting (“I hope to play Porgy one day”), Kurt is just too fey to be believable as a hardened Italian gang member from the fifties. Weird. (Also weird: Given Ryan Murphy’s well-publicized issue with Newsweek writer Ramin Setoodeh’s very controversial article about some gay actors inability to play straight, this story line is almost like a peace offering. What’s next? Quinn admits her favorite band is Kings of Leon?)

And Brittany’s ad campaign isn’t helping. When Kurt confronts her about the posters — “I wanted something toned down!” — she replies, “This is toned down. In the original, the unicorn was riding you.” So Kurt fires Brittany and sets out to prove his masculinity, which totally works (no, it doesn’t). I’m sure I don’t need to go over the rest, but self-acceptance is involved. As Burt puts it, “You sing like Diana Ross and you dress like you own a magic chocolate factory.” Seriously, Kurt. Don’t hide your light under a bushel (everyone can see through your bushel, anyway — it’s made of chiffon).

“The more arts at this school the better. May the best glee club win.” —Will Schuester

Oh, cool. Shelby’s back! Apparently she’s been idling in the corner for the past year or so, filling up with inspirational blah-blahs, AND NOW THE BLAH-BLAHS MUST COME OUT. You might remember Sugar Motta from the previous episode as the girl with “self-diagnosed Asperger’s” who can’t sing (because what Glee needs is another slightly offensive one-dimensional character). Well, in this episode, Sugar’s dad has bribed the school to establish an entirely separate second glee club just for Sugar, and tracks down Shelby to direct it.

Even though this makes literally no sense (couldn’t he just bribe them to let Sugar into New Directions?), it’s a pretty cagey move on the show’s part. There’s now built-in artistic tension between the two glee clubs (was anyone still caring about Vocal Adrenaline?) and sexual tension between Shelby and Schue (no update on the proximity of Ms. P’s hand to Mr. S’s boner, but things weren’t looking good in episode one). Plus, now Shelby’s around to make Rachel uncomfortable and say a whole bunch of misty shit about that baby.

I like having Shelby around, if only for Idina Menzel’s singing voice (and for the revelation that she has a Regis Philbin tattoo), but this whole story line feels manipulative. I hope it’ll turn into something good. For now, she’s just wandering around McKinley giving people meaningful looks and saying stuff like, “Stop punishing yourself for things you did when you were a child,” and, “Lima’s where I have to make things right again” and, “Blah blah blah blah blah.”

“Will Schuester never did appreciate the gentle tremble of your thin, forgettable alto.” —Sue Sylvester

Oh, right. Quinn. Quinn exists. Two things are happening with Quinn right now. One, Sue is using her as a pawn in her congressional run (“A day in the life of a girl from whom the arts stole everything”). And two, Shelby is trying to get her to “clean up her act” so she can have a relationship with Beth. Neither of these things is particularly interesting (although, in the process, Sue does call Mr. Schue “Weepy the Vest Clown,” which I appreciated), and then, at the end of the episode, Quinn re-blondes her hair and rejoins glee club and finally gets to look at a picture of her baby. Because everyone knows that people with pink hair are unfit mothers but people with blond hair are awesome mothers. And then she whispers to Puck that her new blonde hair is just a ploy to appear reformed: She’s going to get full custody of their baby back. Maybe one day, television will show an adoption story line that is not preposterous.

“I’m also a unicorn. Or maybe a bicorn … Anyway, I’m starting to believe in my own magic.” —Brittany

Kurt tries to hire Brittany back as his campaign manager, but she declines, announcing that now she’s going to run for president!!! The jury’s still out on season three — in my estimation, it’s tending toward boring and strained so far — but I will sit through a million Quinn story lines if it means I get to watch Brittany make a speech. Or, better yet, DEBATE ANOTHER HUMAN. Don’t let me down, Glee.