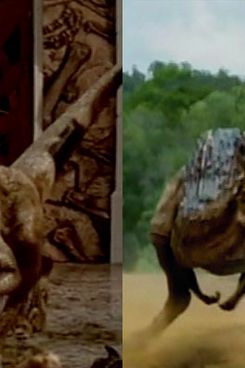 Fox’s Steven Spielberg–produced, big-budget time-travel drama Terra Nova premiered last night, meaning audiences finally had the chance to check out the show’s stars: the dinosaurs. In the two-hour episode, Apatosauri, T-rexes, and “Slashers” ran amok, chomping on leaves, each other, and occasionally people. They looked pretty good while doing it — as they should; the show was delayed to get the CGI on those dinos exactly right — but they also looked not all that different from the very handsome big lizards in 1993’s Steven Spielberg–directed Jurassic Park. (And it’s not just how they look: In the second hour of Nova, the slashers, who hunt in packs, attacked a group of kids trapped in an armored vehicle. In Park, it’s raptors who hunt in pairs and a T-Rex who attacked the kids trapped in a car.) So how far has dinosaur-rendering technology come in nearly two decades? Let’s take a look!

On the left is Jurassic Park’s partially made up Dilophosaurus, the dinosaur that pops its neck, spits, and eats Newman in the movie. (Real Dilophosauri had no neck frill and no spitting ability.) On the right is a Slasher. No neck ruffle, but the teeth sure look the same.

Here we have a T-Rex versus a T-Rex, with Terra Nova’s on the right having both more detail and more of the dreaded CGI-animated feel. (As for the lack of clarity in the image on the right, it wasn’t so grainy in the actual episode, but Fox isn’t releasing stills of the dinos, forcing us to settle for pixelated screen grabs.)

Aw, that sweet, long-necked herbivore, the Apatosaurus — looking pretty much exactly the same!

On the left is one of Jurassic Park’s raptors, who looks very similar to … one of Terra Nova’s T-Rexes! Different size hands, though!

Related: Terra Nova Reviews: Tell Us Again How the Dinosaurs Compare to the People
Network Status Report: Will Simon Cowell and Terra Nova Make Fox Even More Dominant, or Push Their Luck?

How Do Terra Nova’s Dinosaurs Compare to Jurassic Park’s?