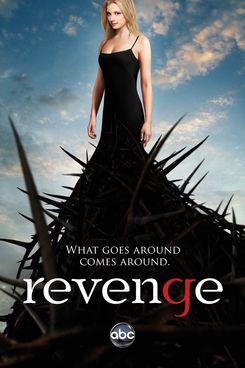 Revenge, ABC’s dead-serious melodrama about a young woman seeking, well, revenge on the people who destroyed her father, premieres tonight. Despite being set in the Hamptons, starring a woman, and having to do with financial fraud, Revenge is purportedly based on The Count of Monte Cristo. It’s not the only new series adapted from preexisting material: The Secret Circle* is based on a YA series; Kelsey Grammer’s Boss is based on Shakespeare; Maria Bello’s Prime Suspect is based on Helen Mirren’s Prime Suspect; and there are more. How much do these new shows really have to do with their sources? Will a familiarity with Dumas’s classic turn you against Revenge? Will prior knowledge of Helen Mirren turn you against Prime Suspect? (Short answers: No, yes.) Let’s run though ’em all.

Revenge
Source Material: Count of Monte Cristo
Faithfulness: Like the Count of Monte Cristo, the protagonist of Revenge returns to her hometown to get vengeance on the horrible people who ruined her life. But unless the lead of Revenge turns out to be a man, the Hamptons turn out to be France, and there’s a lot of sword-fighting, the similarities will likely end there — though the two do share an operatic tone.
How much knowing source material will bother you: Not at all, unless you’ve been wishing for an extremely faithful adaptation of Monte Cristo and are bummed this isn’t it.

Charlie’s Angels
Source Material: Charlie’s Angels, the late-seventies, Farrah Fawcett–starring TV show
Faithfulness: The Angels have relocated to Miami, where they have slightly different backstories, no feathery locks, more intimidating fighting skills, and a handsome Bosley. All in all, it’s not that different. The biggest change is that, in 2011, the “girls in bikinis can still have power” premise seems very tired.
How much knowing source material will bother you: Quite a bit, but not because the original is so great. Rather, because the new series lacks the nostalgic charge of the Fawcett-led series and the good humor of the Drew Barrymore, Cameron Diaz, and Lucy Liu films. You’ll just wonder why they made it all.

Prime Suspect
Source Material: Prime Suspect, the beloved British series starring Helen Mirren
Faithfulness: Though the new show has an almost identical premise (a tough female detective facing discrimination while she tries to solve murders) and some similar plot points (a co-worker dies suddenly), the shows are very different. The American version is a gritty procedural, with a main character — Jane Timoney, played by Maria Bello — likely to get into fisticuffs; the British original had longer plot arcs, and a main character — Jane Tennison, played by Mirren — who kept her feelings much more bottled up.
How much knowing source material will bother you: Fans’ devotion to the original Prime Suspect is such that even suggesting someone could play Mirren’s part is sacrilege — like suggesting a remake of Taxi Driver without Robert De Niro (one day, that will likely happen, too). Though the new Prime Suspect seems intent on being very different, originalists will likely pooh-pooh it anyway, at best deigning to admit it’s not that horrible for something that’s not nearly as good as the original.

Boss
Source Material: King Lear
Faithfulness: Kelsey Grammer plays the Mayor of Chicago (so, like Lear, he’s the ruler of a domain), a corrupt man with a degenerative illness (so, like Lear, he’s dying) who is surrounded by people he can’t trust, except his (like Lear) youngest daughter. But the whole thing is set in contemporary Chicago, so it doesn’t actually feel similar at all.
How much knowing source material will bother you: Not much, except to the extent that it forecasts the ending — tragic.

Free Agents
Source Material: The British version of Free Agents
Faithfulness: Very. The American pilot, starring Hank Azaria and Kathryn Hahn, cribbed about 75 percent of the British version exactly, even down to Anthony Head (a.k.a. Buffy’s Giles), who appears in both series in the same part.
How much knowing source material will bother you: There’s probably not that many people in the States who are familiar with the source material, and those who are may not have something to compare to it for long (Free Agents didn’t premiere that well last week). But for those that are watching both, they shouldn’t mind too much — the original is likable, but not perfect: It could be improved upon.

The Secret Circle
Source Material: The nineties YA books of the same name, written by L.J. Smith
Faithfulness: Like the books, this is the tale of young newbie witch Cassie, who will probably get caught up in a love triangle. But, like Gossip Girl and Vampire Diaries — both based on YA series, the latter also by Smith — the show will depart from the books after the premise.
How much knowing source material will bother you: No more than it bothers people familiar with the Gossip Girl and Vampire Diaries series — so, not at all.

Once Upon a Time
Source Material: Fairy tales
Faithfulness: The show, which is about a group of fairy-tale characters unknowingly trapped in the real world, takes many a fairy tale — from Snow White to Rumpelstiltskin to Sleeping Beauty — and mashes them up into one slurry fairy tale, so as not to be particularly faithful to any one.
How much knowing source material will bother you: Well, if you ever imagined that Prince Charming wasn’t super dull, that the Evil Queen was more than just an unloving foster mother, or that Rumpelstiltskin was not being a creeper in a dungeon, then this might bother you. Otherwise, you should be fine!

Grimm
Source Material: Fairy tales, specifically the Brothers Grimm ones
Faithfulness: A cop learns that fairy tale creatures are real, evil, and masquerading as humans when he starts being able to see them.
How much knowing source material will bother you: Unlike Once Upon a Time, the whole premise is that fairy tales aren’t what you think they are — the Big Bad Wolf is a pedophile with a thing for red instead of, you know, a wolf. The show is riffing on the source, not co-opting it.

*Corrected to show the TV program is called The Secret Circle, not The Secret History, another, altogether different book.

How Much Will Knowing the Source Material for These New TV Shows Bother You?

things to look forward to 16 mins ago
HBO Releases My Brilliant Friend Season 3 Trailer, Amici We’re going back to Naples this February.
this month in comedy podcasts 1:00 p.m.
This Month in Comedy Podcasts: Taylor Tomlinson’s Sad in the City Rounding up our favorite comedy podcast episodes of the month.
the lads are fighting again 12:21 p.m.
Morrissey Wants Johnny Marr to Cease and Desist, Bitch “Must you persistently, year after year, decade after decade, blame me for everything?”
vulture 10x10 12:00 p.m.
The Ungodly Puzzle 27-Across: This is what it sounds like when doves cry.
late night 11:55 a.m.
Meet Lou Wilson, Jimmy Kimmel Live!’s New Announcer We spoke with the comedian about his fancy, brand-new late-night gig.
overnights 11:50 a.m.
The Book of Boba Fett Recap: A Very Special Guest Star Wait, did we turn on the right show?
allegations 11:45 a.m.
Director Amy Berg Says She Was Stalked Online While Making Phoenix Rising “There’s a lot of like online stalking in that world, the Brian Warner world, so we had to take a look at that.”
deaths 11:18 a.m.
Peter Robbins, Charlie Brown Voice Actor, Dead at 65 He played the character in beloved specials like A Charlie Brown Christmas and It’s the Great Pumpkin, Charlie Brown.
get naked 8:00 a.m.
Could John Cameron Mitchell’s Joyfully Sexual 2006 Film Shortbus Get Made Today? It didn’t fake the sex, and I was at the try-outs.
last night on late night 1:52 a.m.
Nicole Byer Has a Lot of Questions About Spider-Man “What plot point brought [Jamie Foxx] to look like that?”
actors on actors 12:47 a.m.
Bradley Cooper ‘Didn’t Give Up on Acting’ Thanks to Paul Thomas Anderson “He was teaching me all about lenses, things I never knew.”
theater review Yesterday at 10:52 p.m.
A Speed Date With Long Day’s Journey Into Night Cut from three and a half hours to two, and TB traded for COVID.
overnights Yesterday at 10:01 p.m.
This Is Us Recap: Jack’s Mom In what may be the last stand-alone Jack episode, Milo Ventimiglia has never been better.
lightning strikes Yesterday at 9:52 p.m.
Percy Jackson’s Author Blesses Disney+ Adaption: ‘We’re in Great Hands’ Percy Jackson and the Olympians has been picked up to series.
lawrence hive Yesterday at 7:35 p.m.
Who Slapped Jay Ellis in an Airport? Drop your location, we just wanna talk.
drew's news Yesterday at 6:17 p.m.
Drew Barrymore Refuses to Kink-Shame Megan Fox and MGK Barrymore likes that he got Fox an engagement ring with thorns that hurt if she takes it off.
remakes Yesterday at 5:00 p.m.
Disney’s Live-Action Snow White ‘Makes No Sense’ to Peter Dinklage “You’re progressive in one way, but you’re still making that fucking backwards story of seven dwarfs living in a cave together.”
switched on pop Yesterday at 4:20 p.m.
Elvis Costello’s Aim Remains True, 32 Albums In  Plus, riffs on everything from Olivia Rodrigo’s songs being “how rock and roll works” to passing on a chance to write for Adele.
comedy review Yesterday at 4:16 p.m.
Aziz Ansari’s Empty Authenticity If at any point his material reached for the same goals as the look of the special, Nightclub Comedian might be a different experience.
the videodome Yesterday at 3:35 p.m.
Are You ‘Curious’ About Franz Ferdinand’s New Track? They even do an avant-garde hoedown.
More Stories