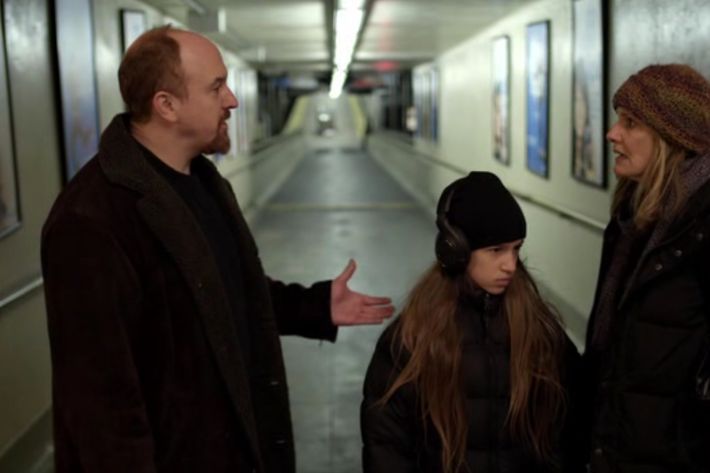 Last month, Louis C.K. poked fun at TV clichés via the show-within-a-show, Oh Louie, a limply constructed fake-sitcom pilot that not only took a swipe at big-network conventions, but that also happened to reinforce Louie’s (and, presumably, Louis’s) anti-sitcom stance. So it was a little strange to watch last night’s episode, in which Louie embraced one of the most well-worn sitcom setups of all-time: The out-of-nowhere new kid! That’s right. Unless “Niece” was another of Louie’s hallucinatory episodes, Louie just got its own Cousin Oliver.

But before the brood expands, Louie has some generation-gap observations he needs to get off his chest. “Niece” opens with one of Louie’s longest stand-up riffs thus far, with our titular grumpy-puss complaining about the self-important young’ns he often has to deal with while renting a car. “They think they’re too interesting a person to have a shitty job,” he says. “They’re 20, which is a mathematical guarantee that they have no skills and nothing to offer anybody in the word. For two decades, they’ve just been sucking up education and love and food and iPods.” It’s amusingly harsh, but absolutely untrue: No one in their twenties can actually get a job these days.

We then cut to a brief black-and-white montage of assorted white-collar hustlers and weirdos traipsing through Grand Central Station, footage so lush and timeless it could have been a leftover from Louis C.K.’s short-film period. Turns out Louie’s at the station to meet his sister Karleen, whom we met briefly (and drunkenly) back in “Joan.” But when Karleen arrives, she tells Louie she has to go to Philadelphia — leaving Louie in charge of her 13-year-old daughter, Amy. Once Amy learns she’s been separated from her mom, she charges past the crowd and into the city streets, where Louie just barely catches up with her. So aloof, yet so wily! She’s like Newt from Aliens, only with better headphones and less soot.

After spending four hours in Lily and Jane’s room, nary making a peep, Amy asks Louie to take her to the Lower East Side club Fontana’s, where she stands in stiff silence. Then she tells Louie she wants to see him at work, an idea he immediately shoots down. “Why? Because you say ‘shit’ and ‘fuck’ and talk about bad things? My mom says fuck* all the time. She screams it in my face.” By now, it’s becoming obvious to Louie that Karleen is one bad mother, in every sense of the phrase.

They arrive at the Comedy Cellar, where Amy cracks up watching mono-monikered comic Godfrey interact with the audience. Louie dismisses the crowd work as too easy, but in a charmingly chest-puffing bid to impress his niece, he gets up and does some crowd work of his own, and promptly bombs. Afterward, he and Amy hang out postshow with fellow comics Todd Barry and Nick DiPaolo, neither of whom can connect with her. “You can’t talk to teenagers, especially girls,” says DiPaolo. “They’re in a wilderness of hormones and bad ideas. All you can do is look at your watch and wait. And then around 16, they come out, and they either come out as people, or as whores.” One thing’s for sure: After that little sexist swipe, most of them probably won’t be coming out as Nick DiPaolo fans.

Once Godfrey approaches the table, though, Amy lights up considerably, even opening up to him. “Every second, my mom has a problem with me,” she says. “I can never be myself. She hates me.” Godfrey offers some sage advice: “It’s okay to push away, make some room for yourself. But don’t push too hard, ‘cause you’re gonna need her.” He then gives her a dap — or should I say a “terrorist fist-jab,” seeing as FX is a Fox-affiliated network — leaving Louie to marvel at Godfrey’s communication skills. “You’ve just got to learn to talk to people who aren’t like you,” Godfrey tells him. “It’s called empathy, man.”

On their way home, Louie gives money to a homeless guy, earning a diatribe from Amy. “You shouldn’t do that,” she says. “You’re putting yourself above them. It’s condescending. My dad told me that people who do charity do it better themselves, not others.” Louie responds by pointing out that her dad was the guy who ran out on Amy and her mom. You can almost hear the guitar licks from R. Kelly’s “Real Talk” building up in the background.

They return to Louie’s apartment, where he carries her to bed, only to receive a call informing him that Karleen is in a Philadelphia hospital. Apparently, she’d been found acting “irrationally” in a public fountain (having grown up near Philly, I know this is pretty much an everyday, non-ticketable offense, but whatever). Louie’s informed that, with mom in the hospital and dad being a total dink, he’ll have to be her legal guardian, if he’s up for it. And after a brief pause, he agrees to take her in. It’s called empathy, man, and it sets up all sorts of questions for the season-two finale: Will Karleen show up and reclaim her daughter, or is Amy on Louie for good? How will Lily and Jane react to their de facto older sibling? And finally, when can we look forward to seeing Nick DiPaolo get decapitated by a garbage truck?

*Corrected to show Amy’s mom does not say “shit” all the time.

alternate endings 5 mins ago
Better Call Saul Could Have Ended Very Differently Jesse in prison, Gene in color, and the other possibilities considered, sincerely and in jest, for the end of this decade-and-a-half-spanning saga.
mac-ken-zie da-vis 17 mins ago
MacKenzie Davis Shows a Massive Respect to Stath Lets Flats Watch her go. Watch her go.
clear eyes full hearts 5:59 p.m.
W Magazine’s Uncanny Valley TV Cosplay, Ranked From last-minute Halloween costume to, well, store-bought Halloween costume.
batter up! 5:27 p.m.
All of A League of Their Own’s Nods to the 1992 Peaches Of course the Prime Video series knows “there’s no crying in baseball,” but that’s just the beginning of its many winks to the movie.
rip 5:20 p.m.
Wolfgang Petersen, Das Boot and The NeverEnding Story Director, Dead at 81 The German director defined action thrillers for a generation with films such as In the Line of Fire.
nicki voice: it's the remix 4:42 p.m.
Rogue One to Be Rereleased With a Sneak Peek at Prequel Series Andor Ahead of the Disney+ series’ September 21 premiere.
a long talk 4:27 p.m.
Kim Wexler’s Curtain Call Better Call Saul’s Rhea Seehorn looks back on six seasons spent getting inside ‘an extremely inscrutable character.’
By Jen Chaney
the o group 3:35 p.m.
Wait, How Many Homes Has Selling Sunset Star Chrishell Stause Sold? “As of June, I think I’ve done seven deals so far in real estate …”
vulture lists 3:00 p.m.
A Ranked Guide to John Wick–Inspired Movies Evaluating the latest generation of stunt-heavy, fist-fighting action movies.
movie nights 3:00 p.m.
Noah Baumbach’s White Noise Will Open This Year’s New York Film Festival Luca Guadagnino’s Bones and All and Maria Schrader’s She Said join the festival’s Spotlight selection.
trailer mix 2:31 p.m.
Cobra Kai Season 5 Trailer: The Valley Is Still at War Netflix’s Karate Kid spinoff premieres with honor on September 9.
remembrance 2:00 p.m.
The Jagged Life of Anne Heche She lived and died like an early Hollywood star who imploded before a grande dame period could get under way.
By Matt Zoller Seitz
lumon+ 1:35 p.m.
You Can Guess What a Book Called Talkin’ and Walken Would Be About Okay, but can you guess who would write it?
switched on pop 1:30 p.m.
Demi Lovato Knows All the Highs and ‘Whoas’ of Pop Punk On “Substance,” she flexes her intimate familiarity with the genre.
dancing through life 1:29 p.m.
Solange Is on Her Way to the Ballet “Very excited to announce i’ve composed an original score for the New York City Ballet 🖤”
overnights 1:26 p.m.
Only Murders in the Building Recap: All Is Not OK in NYC Is identifying a killer harder than sorting out daddy issues? Hard to say.
breakups 12:55 p.m.
Florence Pugh Single! (No, Not Music.) The Don’t Worry Darling star says she quietly separated from Zach Braff this year.
trent stans rise 12:43 p.m.
Never Have I Ever Cast Pitch Their Dream Celebrity Narrator Tony Hawk, the people want a Trent episode!
how to 12:18 p.m.
How to Sing Sondheim Like Sara Bareilles Why the pop singer’s voice was an unusual fit for the Broadway revival of Into the Woods.
By Jackson McHenry
album review 12:06 p.m.
Megan Thee Stallion Takes Control of Her News Cycle Traumazine is a reminder there’s a human on the other side of the headlines.
More Stories