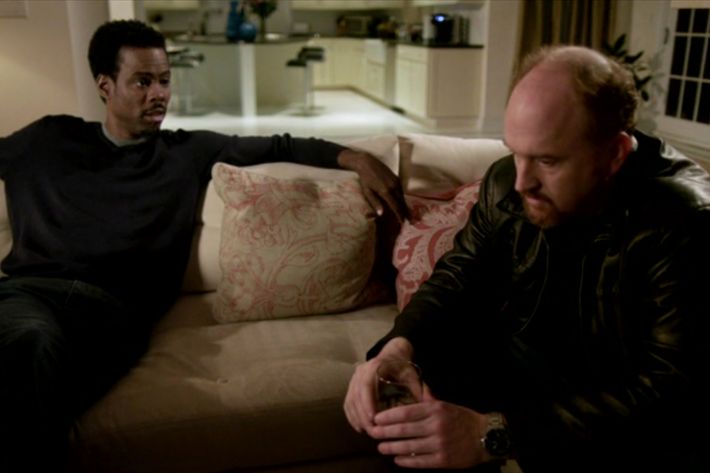 And so, after a summer replete with baby ducks, suicide threats, and hobo decapitations, we’ve reached the end of Louie’s sophomore year. And thank God. If the core theme of Louie this year has been honesty — about the stark truths we dole out, desire, and exchange like so much currency — then I may as well level with you good people: Louie can be a frustrating show to recap. It’s a 22-minute, linearly experimental comedy that’s as grounded as it is absurdist, with a temporal structure unlike any other show on TV. Without big plot twists to chew over, or “Nikki and Paulo”–style aberrations to bemoan, I sometimes went too micro on the minutiae, and there were times I felt I was simply recycling the same bewildered praise from the week before. Louie’s a great show, but after a while, you just want to hash it out in person, over a few drinks, preferably at a joint far away from Nick DiPaulo.

Before we head to the bar, though, let’s wrap up “Airport/New Jersey,” the two-part finale. First things first: The (justifiably) sad-sack niece Louie agreed to take in at the end of last week’s episode was nowhere to be seen last night. Who knows? Maybe she’ll never be mentioned again. Considering all the narrative wiggle-room C.K. allows himself — this was the season, after all, that not only found him adding new siblings, but also having visions of bum-swapping Feds — it’s a possibility. But it’s more likely he didn’t want to close out season two with a cliffhanger-ish finale. Unless the MIB Feds get to her first, my guess is she’ll be back next year.

Despite the episode’s title, “New Jersey” comes first, opening with an enjoyably lewd onstage riff in which Louie extols the pleasures of sleep, which he compares to a being “sucked off by a goddess whore with a gold helmet and 40 tongues.” After the set, Louie runs into comic Steven Wright, who’s dressed like he just threw a dinner party for Quint aboard the Orca. When Louie mentions he’s heading home for the night, Wright implores him to stick around: “After a set like that, you gotta hang out and get laid,” he tells him. “You own every woman in that place, you can have any one you want. Don’t be an asshole.”

Louie relents, only to spend the night awkwardly pacing around the bar alone, sad piano plunks hanging over his head. When leaving the club, though, he’s called over to a car, where a woman with bright-red lipstick and a deep-blue vocabulary awaits. “I was just sitting here, hoping you’d come out,” she says. Why? “Because I want to show you my pussy.”

Louie, who’s got to get home to the kids, declines. But when she un-pops the door lock, he can’t resist, and the two begin a quiet, hand-job-intensive drive back to her remote New Jersey estate. They walk through the door to find … her husband, who’s wearing both pajamas and a silk robe, and who’s played by F. Murray Abraham (who probably brought his own wardrobe that day). Turns out he wants to join Louie in this weird game of tell-and-show. “She’s my wife,” he objects. “Don’t I get to see it, too?”

It’s unclear whether they’re creepy swingers, or simply bored Jerseyites, or both. Whatever their game is, Louie wants no part of it, and he’s soon kicked out into streets. So he does what we all do when we’re lost in New Jersey: He calls Chris Rock, who picks him up, much to his nagging wife’s annoyance. Back at Chris’s place, Chris chews Louie out with MC Gusto–like straightforwardness. “What are you doing with your life? You’re a father, Louie. Jumping into cars, messing around with swingers. This is 30-year-old shit, not 40-year-old shit.” Louie looks appropriately chagrined. Last season ended with him taking his daughters out for a cozy late-night pancake meal; now, just a year later, he’s getting into cars with a strange, out-of-state cat owners.

And things only get worse from here. “Airport” is a follow-up to “Pamela,” the heartbreaking high point of season two, in which Louie lays it all out for Pam: That he loves her, and though she doesn’t love him, he’s always going to hold out hope, as beautifully stupid as that may be. “Airport” finds Louie driving Pam to the airport, where she’s en route to Paris to reconnect with the estranged father of her child. Like a kid whose parent is about to leave for a work trip, Louie anxiously inquires about when she’ll be coming back. “Listen, here’s the deal,” Pamela says, unzipping Louie’s chest to remove his soon-to-be-mangled heart, “I’m going to Paris to make it work with my kid’s dad. And I’m not coming back. You understand?”

He does and he doesn’t. “Yeah, but you might come back,” he says. “Look, I know the chances are slim, but I think we’re supposed to be together … I have a hard time believing that I feel this way, and that there’s nothing comin’ back. I think you’re just not aware of it yet.”

She laughs, gently. “Louie, you’re the most fucked-up person I ever knew,” she says. “I love ya. I do. But you gotta move on. Forget about me. Now.” Louie tells her he’s gonna wait anyway, and begins to tear up. As Pam goes through security and heads up the escalator, Louie watches motionlessly, prompting her to yell, “Wave to me, dummy!” But Louie being Louie, he mistakenly hears this as “Wait for me!” and excitedly promises to do so.
And then he leaves the airport — and exits the season — with a a big, goofy, slightly confused expression on his face, as if to say: I have no idea what the fuck just happened, but it felt good anyway. He looks, in other words, like a typical Louie viewer.

Louie Recap: Wave for Me