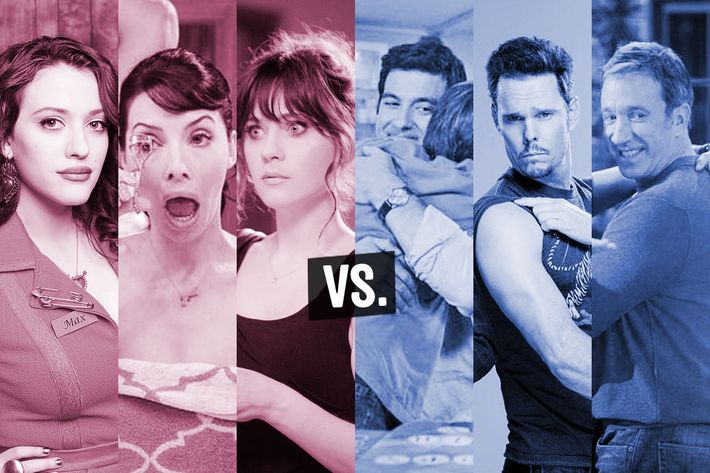 One of the biggest, and certainly one of the most attention-getting, trends of the new fall TV season has been the bevy of smart, sexually assured, twentysomething lady sitcoms, with each network bringing a contender to the schedule: CBS has 2 Broke Girls with Kat Dennings (premiering tonight); Fox has New Girl with Zooey Deschanel (premiering tomorrow); NBC has Whitney with Whitney Cummings (premiering Thursday); and there are more on the way for mid-season. A related trend, but one that has been getting less attention for the obvious reasons — the shows are not as good, and their stars don’t look as good — are the bitter-man comedies: Tim Allen’s Home Improvement follow-up, Last Man Standing; ABC’s Man Up, which could be called How to Be a Father; CBS’s How to Be a Gentleman, in which Kevin Dillon advises a polite, spineless fellow on how to be butch; and, come mid-season, ABC’s magnificently wretched cross-dressing comedy Work It. These Sad Man Sitcoms are about how confusing, difficult, and often emasculating it is to be a Man (in the capital-M, being-a-Man-is-more-than-just-having-a-penis sense) in the days of the mancession. The guys in the second batch of shows are in crisis because they have found themselves living in a world that belongs to the women in the first batch of shows — and they don’t like it one bit.

In Last Man Standing (October 11, ABC), Tim Allen plays Mike, the father of three daughters. His career taking photographs for a wilderness catalogue is in jeopardy because young men aren’t as interested in crossbows as they used to be. Meanwhile, his wife’s career as a business executive is thriving. Mike rants in his vlog, Howard Beale–style, “What happened to men!” as he complains that guys these days can’t survive in the wilderness, catch big fish, or change tires. The fellas in Man Up (October 18, ABC) and How to be a Gentleman (September 29, CBS) sure can’t do these things. Man Up is, more or less, a show about three Phil Dunphys: well-meaning, often hapless fellas trying to figure out how to project authority in homes and relationships thoroughly dominated by their female partners. In How to Be a Gentleman, an effete magazine writer named Andrew is chastised by Kevin Dillon’s muscle-head character Burt, “You know everything about being a gentleman, and nothing about being a man,” before beginning to inaugurate him into, more or less, the Tim Allen school of manliness. (Dillon and Allen’s characters disagree on one thing only: spray tanning. Dillon pro, Allen con.)

These men can find confirmation for their fears about manhood on Whitney, 2 Broke Girls, and New Girl. Whitney is the forceful personality in almost all her relationships, and the sexually forward one with her boyfriend, Alex. He loves her, but is slightly whipped: “I have a girlfriend, so I can’t engage in any kind of merriment,” he tells a flirtatious woman. 2 Broke Girls’ Max is similarly brusque (for good reason; that show was also created by Whitney Cummings). It opens with Max giving two hipsters with bad manners the what-for and rolls along from there, everyone a target of Max’s caustic wit. And unlike the self-pitying sitcom men, Max works two menial jobs and doesn’t mope about it: She may not be rich or privileged, but she’s not blaming Zeitgeisty cultural shifts like “the end of women” for her predicament.

Kevin Dillon upbraids his effete tutee on How to Be a Gentleman for not knowing how to ask a woman out. Imagine how disconcerted Johnny Drama 2.0 would be to discover that even Zooey Deschanel’s soft, flighty Jess is showing up at her boyfriend’s house to do a naked striptease and later telling a dude at a bar that she’s in the market for casual sex. And “adorkable” as she is, Jess is the character everyone else has to make room for: She moves in with three guys, and takes over their couch and their lives. They have to accommodate her, and when they do exactly what Allen or Dillon’s characters might suggest — yell at her to toughen up and stop crying — it doesn’t work. The pilot ends with her new roomies turning down guaranteed tail to sing “I Had the Time of My Life” to her in a restaurant. Last Man Standing’s Mike would likely be horrified by this musicality, given his stated position that “The only time a man should dance is when someone is shooting at his feet.” (The line that proceeds this nugget of wisdom is about his grandson’s hippie nursery school, which Mike doesn’t want him to attend: “You know how that ends up? With Boyd dancing on a float.” More overt even than the Sad Man Sitcoms’ misogyny is their homophobia.)

Oddly, if Mike, Whitney, and Max were all stuck in a room together, they might get along: They all hate hipsters, hate fake tans, and think men have become too emo. One of Whitney’s single girlfriend’s delivers a rant that could have come out of Mike’s mouth: “It’s a war zone out there: Guys have calf implants. They have feelings. I dated a guy who had a screenshot of a baby, and it wasn’t even his baby.” When Max dresses down those hipsters, she sneers, “I wear hats because it’s cold, you wear hats because of Coldplay.“ Whitney’s atrocious ad campaign— Men are from Mars, Women are from Planet High Maintenance — could just as easily have been an ad campaign for any of the Sad Man Sitcoms.

But the difference is still palpable: Last Man Standing, Man Up, and How to Be a Gentleman are all coming from a place of fear and bitterness. They are predicated on the idea that once, no so long ago, there was a code, a way to be a man that everyone understood, and now that code is gone, leaving Y chromosomes isolated and flailing in a tech-savvy world dominated by women. (Of course, each show has a different idea of what that “code” was: They’re just sure it existed and made life easier.) They want to believe it’s somehow admirable to be a curmudgeon or a brute, struggling to live up to some old-school ideal, while lamenting that women and less principled men are sneakily taking over the world. You can feel their anxiety: They’re losing the race they made up in their own minds. The lady-led sitcoms are contending with no such burden: They’re looking forward, not back to some golden age of clearly defined gender roles. On their shows there are lots of ways to be a man — some good, some lame — and there are even more ways to be a woman. Whether it’s true or false, both sets of shows seem to agree that it’s way more fun to be a woman than a man right now. Certainly, after watching all these sitcoms, you’d think they have a point.