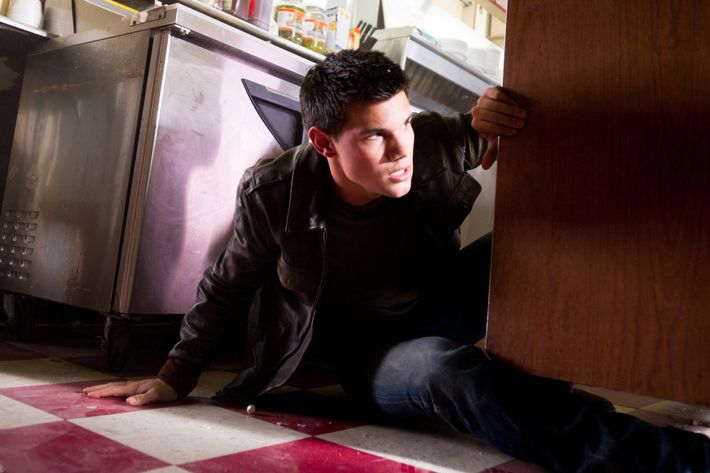 The darkly lit, heavily photoshopped movie poster for Abduction features Taylor Lautner skating down a slide of broken glass in a surfer position, clutching a gun in his hand. In the film, when this scene actually happens, it’s broad daylight, Lautner doesn’t have a gun in his hand, and, instead of riding the broken glass like a badass action hero, he’s sliding on his butt like a kid at a playground. The whole miserable film is similarly disappointing. Lautner makes a nice poster, but is he a leading man? No way. He’s being sold as the next great action star, but in Abduction, he’s just another kid on the bumpy slide.

Lautner plays Nathan, a teen with rage issues who discovers that his parents might not be his real parents when he stumbles across his baby picture on a missing persons site. His girlfriend, the pitifully flat Lily Collins, takes one look at the site’s computerized rendering of what that baby would look like as a grown-up teen and says, “Matt Damon meets you.” It’s rare to see a film position its star so blatantly and egregiously — since Lautner’s Nathan is not even a fourth-rate Jason Bourne. Even among teen action stars, Lautner is strictly junior varsity: Saoirse Ronan (Hannah) and Chloe Moretz (Kick-Ass) would both kick his ass.

The sloppy action sequences and unoriginal fight scenes wouldn’t be such a problem if Lautner could emote, but everything except his mouth seems frozen, as if he was Botoxed at birth. He’s all Blue Steel, no chops. (If he were the least bit funny, which he’s not here, he’d be the perfect star for Zoolander 2.) Immobile and rubbery, it’s as if he’s only partially-animated and missing half his polygons. He’s bad acting’s human uncanny valley.

And the film itself? The plot is nonsense and, despite the moving trains and cars, John Singleton shoots the film as slowly as possible — all the better to appreciate the plot holes and awkward facial expressions. The script is filled with howlers, from a hysterical “You remind me of your mother” to the in-film plot summary, “A few days ago we were just a couple of high school kids; now it feels like a lifetime ago.” After that line, Lautner’s Nathan agrees, saying, “That’s because it was.” Following this stinker, it seems like a lifetime ago that Lautner was considered Hollywood’s next big thing.

Related: Hollywood Banked on Taylor Lautner Being a Star, But What If Abduction Fails?
Robert Pattinson’s Back Muscles Are Very Impressive, and Other Revelations From the Twilight Comic-Con Panel