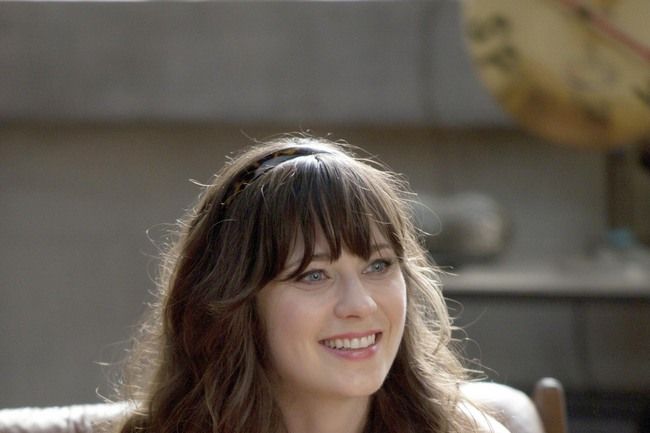 In addition to being an actress and craft-enthusiast, Zooey Deschanel is one-half of the darling indie-folk duo She & Him. So it’s a no-brainer that she would lend her musical talents to New Girl, her much-discussed sitcom debuting tonight on Fox. Deschanel wrote the theme song, which Vulture is streaming below, and it’s a typically sunny track with references to lollipops, moonshine, and all things adorably Deschanel. (If you’ve seen the pilot, you’ll also catch a shout-out to the song her character Jess writes for herself.) Check it out, and then, if you like, head on over to grab it on iTunes.

Related: Things You Learn After a Lot of Time Spent with Zooey Deschanel

spotify x myers-briggs 7 mins ago
There’s Just Too Much Spotify Wrapped Apple Music and YouTube Music are now onboard — while Spotify has gone overboard.
coming soon 25 mins ago
It’s a-Here, Mario! Chris Pratt, look how you massacred our boy.
funny videos of the month 1:00 p.m.
The Best Comedy Shorts of November 2022 Rounding up our favorite funny videos of the month.
By Luke Kelly-Clyne and Graham Techler
coming soon 12:18 p.m.
Too Hot to Handle Faked Out Ten New Singles With Mario Lopez’s Help But don’t worry, Desiree and Lana are still torturing them in the new trailer.
vulture 10x10 12:00 p.m.
The Explorer Puzzle 16-Down, Three Letters: “___! I Feel Like a Woman!”
christmas music 11:30 a.m.
The 10 Best Versions of ‘Jingle Bells’ Kris Jenner and Barbra Streisand don’t appear together on many lists, but they do here.
j.lo studies 11:07 a.m.
J.Lo Would Like to Inflict Another Gigli Upon Us What does Mr. Massachusetts think of this?
start here 11:00 a.m.
Want to Try Bad With Money? Start Here. Highlighting the best episode of Gaby Dunn’s podcast.
By Sean Malin
superlatives 10:51 a.m.
Los Bros Hernandez on Love and Rockets’ Most Memorable Women and Forgettable Men “As I was writing that story, I was thinking, This is not good. But I let it go because I knew it would have an effect on readers.”
history 10:12 a.m.
The Sisi Syllabus: Empress Elisabeth Onscreen From early talkies to Netflix hit shows, the Austrian royal was the Hapsberg’s Diana.
a long talk 9:00 a.m.
’Tis the Season for Sufjan The singer-songwriter on what he’s learned about the holidays after releasing 100 Christmas songs.
By Craig Jenkins
chat room 8:00 a.m.
Raúl Castillo on The Inspection’s Unexpected Gallows Humor Even his brother thought the A24 military drama was “really, really funny.”
100 days of avatar 12:18 a.m.
All of the Avatar Sequel Announcements: A Timeline Avatar 2 has a name, it has a release date, and it has a way with water.
bye twitter Yesterday at 10:31 p.m.
All the Celebs Who Left Twitter “This place is a mess.”
fact check Yesterday at 9:50 p.m.
Sorry, But Tenoch Huerta Mejía Says Marvel Didn’t Touch His Bulge “I’m not going to lie to people.”
category is: categories! Yesterday at 8:04 p.m.
The 2023 Oscars Will Go Back to Celebrating All 23 Categories Live Apparently the Academy got tired of being dragged.
on the record Yesterday at 3:37 p.m.
Will Smith, Oscars Hopeful, Is Very Sorry About the Slap “Hurt people hurt people,” Will Smith told Trevor Noah while promoting his upcoming film, Emancipation.
hosts with the mosts Yesterday at 3:33 p.m.
Steve Martin and Martin Short to Tag Team Saturday Night Live Austin Butler has the easy, no-pressure job of following them up as host.
trailer mix Yesterday at 3:00 p.m.
Let the South Side Season-Three Trailer Repossess Your Heart The Rent-T-Own crew returns to HBO Max on December 8.
vulture lists Yesterday at 3:00 p.m.
16 Great Christmas Movies That Aren’t Christmas Movies Including L.A. Confidential, Three Days of the Condor, and You’ve Got Mail.
More Stories