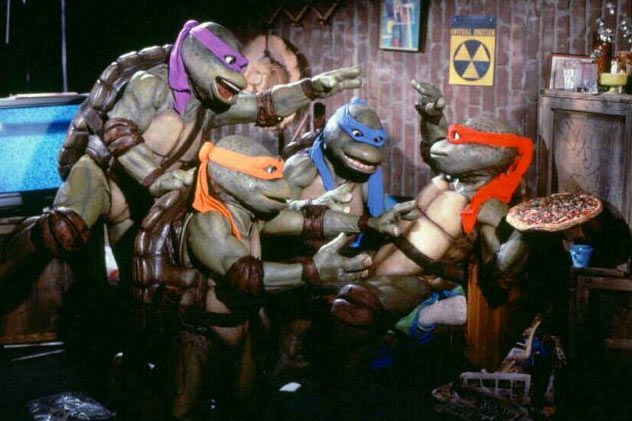 The Nostalgia Fact-Check is a recurring Vulture feature in which we revisit a seminal movie, TV show, or album that reflexively evinces an “Oh my God, that was the best ever!” response by a certain demographic, owing to it having been imprinted on them early. Now, years later, we will take a look at these classics in a more objective, unforgiving adult light: Are they really the best ever? How do they hold up now? We’ve already reconsidered a number of once-beloved entertainments. This week, we revisit the 1990 live-action film Teenage Mutant Ninja Turtles.

Background: The Teenage Mutant Ninja Turtles were the juggernaut of an era where nearly every Saturday morning was an extended commercial for a toy. Kevin Eastman and Peter Laird’s story about four teenage turtles that practiced Ninjutsu may not have been an instant smash with kids when it first aired as a mini-series at the end of 1987, but when it finally broke through in October 1988, it became a huge worldwide phenomenon. Be it toys, video games, or frozen-food items, if Leonardo, Donatello, Michelangelo, and Raphael were on it, every single kid had to have it. A massive success in nearly every way imaginable, a full-length movie was inevitable, and on March 30, 1990, the Steve Barron–directed Teenage Mutant Ninja Turtles hit theaters. The film, which cost $13.5 million to make, would end up grossing over $200 million, making it one of the highest-grossing independent films of all time.

Nostalgia Demo: Anyone who watched cartoons during the late eighties and early nineties. Really, ask nearly anyone, man or woman, who stepped foot on an elementary-school playground between 1987 and 1993 who their favorite Turtle was and they’ll immediately blurt out an answer.

Fact Check: Like all my friends, it was love at first sight for the Teenage Mutant Ninja Turtles and me. How could it not be? They were anthropomorphic turtles who skateboarded, were into ninjitsu, got bossed around by a rat, and, maybe most important of all, loved pizza. The Turtles were high-concept, before high-concept was a phrase we started throwing around in casual conversation. Plus, for many of us, it was one of the first things we liked that was really ours: This wasn’t something passed down to us by our parents, like Mickey Mouse or Bugs Bunny. When I found out Teenage Mutant Ninja Turtles was coming out in theaters, I was insanely excited. I feel for my parents when I think of how unbearable I must have been during the weeks leading up to the film’s release. Upon seeing it, it immediately became my favorite film of all time.

Though based on what was originally a black-and-white small-press comic, the Teenage Mutant Ninja Turtles cartoon was basically product placement for turtle merchandise, if, admittedly, slightly trippier stuff than He-Man. (The Turtles are part of a robust tradition of children’s entertainment that seems to have been created by stoned adults. See, more recently, SpongeBob and Yo Gabba Gabba!) In fact, Playmates, the company that produced the action figures, helped develop the cartoon that really kick-started Turtle mania. This meant that the show, unlike its original source material, was much more kid-friendly. The violence was toned down significantly, story lines were less weird, and the villains were a lot less scary. The original comics were a place where the character Casey Jones could kill a teen who tried to mug him and stumble down a drunken path of self-destruction, something that just wasn’t going to fly on CBS’s Saturday-morning cartoon block. The movie, though, was a different animal (uh, turtle?) entirely. While still PG-rated, things were darker and closer to the original source material (still no teen killing, though).

This is why, 21 years later, Teenage Mutant Ninja Turtles holds up surprisingly well. Let’s get one thing out of the way, though: Any way you want to slice it, this is still a kids’ movie, not a Pixar-style kids’ movie that adults will love just as much as kids. And it looks tremendously, if charmingly, silly. Still, for a kids’ movie, it has some bite to it, something that can’t be said for its cartoon counterpart. The movie exists in a slightly dangerous, unsettling world where violent things happen, one nowhere near as bright and friendly as the one we watched every Saturday. In the cartoon, characters got knocked down and jumped right back up, but in the movie they were knocked out, bloodied, and thrown through skylight windows.

Lots of credit for the movie’s success has to be given to Jim Henson’s Creature Shop, which created the Turtle costumes. Puppets age better than bad special effects. While the turtles aren’t quite realistic — they are human-size anthropomorphized turtles, after all — they look like a believable part of the film’s world, something that can’t be said for the waxy Turtle costumes of the third feature film, Teenage Mutant Ninja Turtles III: Turtles in Time, the one that Creature Shop didn’t work on. As with the debate about the digitized versus puppet forms of Star Wars’ Yoda, there’s much to be said in favor of the puppets and their lack of creepy smooth movement. The film’s score isn’t the Disney-fied music so often present in kid films, either. Instead it’s filled with ominous and icy hip-hop-influenced synths.

The Turtles are surprisingly teenage. Sure, Leonardo, Donatello, Michelangelo, and Raphael are silly, fun-loving turtles who want to do good and eat pizza, but in the movie the four brothers have actual distinctive personalities. (Not that distinctive: if as a child, you just picked your favorite based on whatever mask color they wear, as an adult, you might just pick based on the turtles’ namesakes’ best piece of art. Purple or Blue? Sistine Chapel or Mona Lisa?) They’re adolescents, moody, impulsive, and eager to grow up, but simultaneously terrified of what that means. Just look at Raphael, the closest thing the film has to a main character (even though Corey Feldman, by far the most famous actor doing voice-over work in this movie, was Donatello): We watch him desert his brothers, get beaten into a coma (which he recuperates from by laying in a bathtub), and repeatedly scream into the night, all while learning how to deal with his anger issues. He could almost hang with Jenny from Gossip Girl.

Though, actually, she’d probably be busy with the members of Shredder’s Foot Clan, a gang of disaffected runaways, kids with no moral compass who only care about smoking menthol cigarettes and doing what they want, a really-screwed-up and about-to-teeter-over-the-edge version of Peter Pan’s Lost Boys. Not only do they smoke cigarettes and rob people, they also drink beer, are constantly tagging things, and gamble and play pool. Their hideout is like a teenage Gomorrah. “Anything you guys want, we got. Anything you want to do, do it,” one of the Foot’s thugs, played by a very young Sam Rockwell, tells some new recruits halfway through the film.

See how young he is (and how unfortunate his goatee) here:

The turtles and the Foot Clan are running around a totally different, pre-Giuliani New York. The city is dark and dank, a gritty urban pile of empty warehouses and dilapidated apartment buildings, where danger lurks around every corner. As the movie begins, the city is in the midst of a crime spree that authorities are powerless to stop. “It’s like the city is falling apart,” April’s boss Charles tells her. “It’s getting to where you can’t even step outside in the daytime anymore.” If not quite the urban cesspool of the seventies and early eighties, it’s still a place where everyone is at risk, where you’re just waiting to be victimized, where a simple walk to the bodega is likely to get you mugged by a band of ninjas.

It’s also a New York where people still love their boom boxes. Not that this was any different from other movies of the time, but there are so many Walkmen, boom boxes, and arcade games littered throughout, the movie could open a Radio Shack. At one point, Charles points out that his son puts on his headphones whenever he wants to drown out his father’s complaining, as if it is such a novel concept. The clunky electronics are the only jarring cultural detritus (though, honestly, chunky electronics are really cool: arcade games and boom boxes? Heavy, but awesome). In the movie, Raphael goes to see Critters when he’s angry and wants to get away from the other Turtles. If he went to see Gremlins, it’s possible that reference would still work. Michelangelo’s James Cagney impression and the Sid Vicious T-shirt worn by Charles’s son fare better.

How Does Teenage Mutant Ninja Turtles Hold Up?