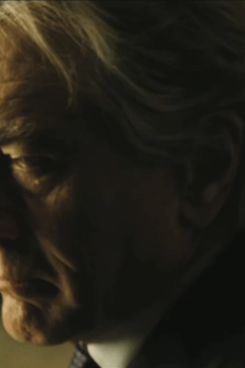 It should be easy to sell us on the movie Red Lights: The movie has an interesting cast (which includes Robert De Niro, Sigourney Weaver, Cillian Murphy, and buzzed-about newcomer Elizabeth Olsen), a promising director (Buried’s Rodrigo Cortés), and an intriguing plot that has De Niro’s world-famous psychic on the verge of being exposed as a fraud. Somehow, though, the Red Lights teaser managed to avoid all those potential hooks! Instead, it’s an almost perverse experiment in how you can manage to draw out nothing — and we mean nothing — for one minute and twelve seconds. This is a movie that should probably tell us what it is and what it’s about, but instead, it asks you to thrill to the idea that Robert De Niro is slowly turning his head and culminates with an over-the-top title reveal that might work if this were The Dark Knight Rises, but doesn’t quite have the same effect for the vague title of a movie you haven’t heard of about who-the-hell-knows-what. We are now weirdly excited for the full-length trailer. Show us less! Less!

Is This the Most Underwhelming Trailer of the Year?

overnights 12 mins ago
P-Valley Recap: The Real Househoes of Chucalissa The Pynk is an absolute mess and the future of the club is in question.
i'm up! 10:44 p.m.
Doechii Snatched Her Own Wig at the BET Awards She came, she served, she conquered.
my single is dropping 10:07 p.m.
Cardi B Announces New Single During BET Awards While not being physically present at them.
overnights 10:00 p.m.
Westworld Season-Premiere Recap: Christina’s World It’s several years into the new world and everyone has made news lives for themselves — but nothing good lasts long in Westworld.
overnights 9:30 p.m.
The Real Housewives of Atlanta Recap: Drop It With Drew & Co. An investigation into Drew’s weight-loss program.
murked on his own beats 9:20 p.m.
Jack Harlow Probably Knows Who Brandy Is Now The rapper performed with the R&B legend and Lil Wayne at the 2022 BET Awards.
overnights 9:00 p.m.
Becoming Elizabeth Recap: Elizabeth Learns a Lesson Catherine Parr, we love you.
2022 bet awards 8:16 p.m.
BET Awards 2022: Full Winners List We’ll be updating who wins throughout the show.
peg the patriarchy 7:29 p.m.
Jack Harlow Brought Lil Nas X (the T-Shirt) to the BET Awards “Wow i really love this man,” says Lil Nas X.
spinoff showcase 6:53 p.m.
What Could a Stranger Things Spinoff Be? Some helpful suggestions.
celebrity response 6:21 p.m.
Celebrities Respond to the Supreme Court’s Overturning of Roe v. Wade Celebrities including Viola Davis, Taylor Swift, and Michelle Obama respond to the Supreme Court’s decision.
its the industry baby 6:15 p.m.
What’s Up With Lil Nas X and BET? Lil Nas X was snubbed with zero nominations at the BET Awards.
overnights 5:36 p.m.
Evil Recap: Horny As Hell A demon in the sheet and a new cryptocurrency? This is literal hell.
exit interview 11:00 a.m.
Peter Strickland Wants the Work That Hacks Are Getting “I don’t see hack as a dirty word,” says the director of Flux Gourmet, an empathetic look at the cost of good art and the perils of human digestion.
By Rachel Handler
chat room 9:00 a.m.
David Hyde Pierce Almost Missed His Julia Moment The TV legend on playing opposite Sarah Lancashire and his ambivalence about that Frasier reboot.
the festival circuit Yesterday at 6:26 p.m.
Olivia Rodrigo Sang Lily Allen’s ‘F- - - You’ to the Supreme Court In response to the decision to overturn Roe v. Wade.
luk at tu! Yesterday at 3:53 p.m.
Julie Andrews Has a Favorite Minion It’s the one that says, “Hello!”
overnights Yesterday at 2:57 p.m.
RuPaul’s Drag Race All Stars Recap: Holy Trinity Y’all … is Trinity going to win this whole thing?
makin' moves Yesterday at 2:27 p.m.
J-Hope Is the First BTS Member to Announce Solo Album After Hiatus Out July 15, just two weeks before his headlining set at Lollapalooza.
daytime emmys Yesterday at 2:01 a.m.
The Young and the Restless’s Mishael Morgan Makes History at Daytime Emmys She’s the first Black woman to win Outstanding Lead Actress.
More Stories