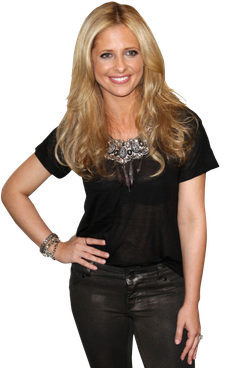 How does one top Buffy? Sarah Michelle Gellar, the now 34-year-old actress best known for her eight-year stint as the aforementioned vampire slayer, has an idea: You don’t fight fair. Forget playing just one girl; to top Buffy, you have to play two. And so Gellar is returning to TV in the CW’s Ringer, which premieres tonight, as identical twin sisters: Bridget, an ex-stripper/addict under FBI protection, who decides to assume the identity of her well-off, seemingly dead twin sister, Siobhan. (Think a soapy Vertigo, not The Parent Trap.) We spoke with Gellar, who is also executive producing the show, about playing twins, cliff-hangers, and what she thinks about the news that producers are trying to get a Buffy movie off the ground without creator Joss Whedon.

You’ve had offers to do shows before. Why Ringer?
I’ve had a few. It’s really hard when you come off a show like Buffy because you know you’re not going to top it. I wanted to do something that was different, and no one’s done film noir. Last Seduction is one of my favorite movies. This is the kind of show that I would watch. Doing it now, it feels like old hat and it feels like I’ve never done it before.

So how noirish will it be?
We’re going to have cliff-hangers, but not just at the end of each episode, at the end of each commercial break. But the one thing that we’ll do differently than I think some of the shows that have mysteries is we’ll have answers for all of them. So it won’t be as frustrating as I think some shows wind up being.

Have you had that experience as a TV watcher?
Yes! But I won’t say which, I don’t want to insult anyone.

Are you referring to Lost?
I wasn’t even talking about Lost!

You’ve played doubles before — you were robot Buffy for a while.
The one thing you’ll hear some actors say about television [is that] they always worry they’ll get bored, it’ll get easy. No one’s going to lie that playing two characters isn’t fun, because you get to sort of run the gamut of everything. I think that any performance from an actor should have duality. We all have that. I’m sort of fascinated by that aspect of people — you know, we’re someone at work, someone different in our home life, we’re someone different in a party atmosphere — and that’s what we’re exploring with the show; not just the duality of the twins, but the duality of each individual character.

Because Ringer is too young?
You know, CBS is — let’s be honest — it’s known for being extremely procedural, it appeals to an older audience, and this show always would’ve been a risk for them. And their numbers are so extremely high that if you don’t deliver right away you worry about, Will the show last, will they give it a chance to find its audience? And, you know, at CW you can be a little more creative within the constraints of what they expect for the network.

Also, you have at least three nice-looking men playing across from you.
And that’s the other thing, too, when you executive produce, you can make sure you hire [them]. And that’s the good thing about playing both the girl roles.

Are you having fun beating people up again?
You know, I’m hoping for the least amount of that as possible because even though you’re beating people up, you get pretty beat up. And let’s be honest, I’m a little older now, I’m not as able as I used to be, so it’s more running away. But Bridget knows how to protect herself, there’s no question. And she gets to shoot a gun, which is really cool, because Buffy never got a gun.

Did you have to learn how to do that?
No, I always knew how to shoot. I kept waiting for the day Buffy was going to get a gun, but she never got one. I guess it wouldn’t do much.

What do you think of the Buffy remake?
Ugh, I mean honestly … I think it’s the stupidest idea. Buffy is Joss Whedon, so if you’re going to do a movie with other people, like, just make a movie about a girl who kills vampires, but that’s not Buffy. I don’t mean to be so blunt, but it’s such a dumb idea, to be honest. I don’t think it’ll ever happen because without Joss, you don’t have Buffy.

Sarah Michelle Gellar on Buffy and Returning to TV With Ringer