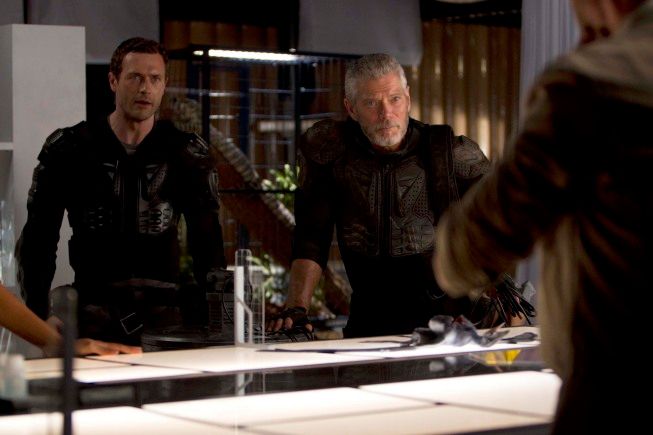 It’s been too long since we’ve been able to watch inexplicably attractive people walk through the jungle once a week. Which is why once-obsessive Lost fans like ourselves treated Terra Nova with the kind of giddiness we once reserved for Mr. Eko episodes. Over the summer, Nova was the great, Cretaceous hope …

And then the characters opened their mouths. Judging by the pilot, it’s going to be difficult to pick out the best line of clunk in the script every week. But try we will. In case we didn’t know punching a cop was bad: “See, now you shouldn’t have done that, pal.” In case we didn’t know Dad was going to join the fam in Terra Nova: “He will find a way. He always does.” Those are good, but the groaner of this week is, of course, about the dinosaurs. “Guess we know that’s why they call them slashers, huh?”

Where are the conversations about what it means to start a civilized society? The backstories that question what it means to be reborn in a place that’s not so different than where you once were? The suggestion that it may be in man’s nature to defile the place he calls home? The show doesn’t have to wrestle with these exact issues, but it would be nice if it found some larger metaphysical theme to dwell on.

Then again, maybe they left all those deep thoughts behind in 2149. What we know about that Earth: It has more or less become Dubai. Lots of buildings, lots of sand, lots of restrictive political policies for anyone who isn’t rich enough to get around them. Two children per family, please, and make sure to give those children names that are no different than the ones yuppie parents gave their kids in the 21st century. Zoe — seriously? It was the 31st most popular name in the country this year. If 138 years is the exact amount of time it takes for a name to cycle from popularity to passé to retro-chic, I’m naming my kid Wilbur.

Anyway, our leading family — a mom, a dad, and their three children who don’t seem to have an ethnicity in common — get selected to go back in time to help create a new society. It’s either that or stick around 2149 wearing “rebreather” masks that make them look like they’ve stepped off the set of Silence of the Lambs. They choose the time travel. And so, after some high jinks involving an off-screen prison escape, they push through a cervical time portal and enter paradise.

What we know about this other Earth: It’s our Earth, just 85 million years in the past, and on a “new timestream.” Terra Nova, aware that no time-travel explanation is ever satisfactory, goes the easy route, saying that whatever happens in the old world won’t affect what’s happening in the new one. Superficially, it makes more sense than Lost’s course-correction and Fringe’s parallel universes, but it also leaves no room for fun. Wouldn’t it be more interesting if Terra Nova had a webcam into the future and could see how its efforts were changing it?

But the settlers of Terra Nova don’t have time for that. They’re too busy with the dinosaurs. And no wonder; they’re the best thing about the place. They had personality, unique characteristics, and looked good — not as good as Caesar in Rise of the Planet of the Apes, but not as bad as Discovery Channel. Clearly they’re our real stars. The last time we saw dinosaurs this memorable on TV, they couldn’t stop hitting each other in the head with frying pans.

I suppose there are people in Terra Nova, too. There’s our aforementioned family: a former cop with an anti-authoritarian streak (Jim), a doctor who has more accent than personality (Elisabeth), a son who’s in denial about his daddy complex (Josh), a daughter who likes books (Maddy), and toddler Zoe, who may or may not exist just to get kidnapped by some postpartum-suffering dinosaur in episode four or five. (Can a 4-year-old get amnesia?) The two most salient details about Mom and Dad: They don’t like talking about why they broke the law and had a third kid, nor do they like having sex. Despite being separated for two years, they have no interest in taking each other’s clothes off, leaving poor Jim to do it himself while hacking at some overgrown branches.

There’s also Colonel Taylor, who may look familiar from that alternative Hollywood production set in an otherworldly jungle. He’s not nearly as three-dimensional here, though. Midway through the episode, we discover both that Taylor had a son who disappeared once he came to Terra Nova, and that Terra Nova’s writers know about Chekhov’s gun. By the end of the episode, the son has reappeared, not in person, but in the form of unintelligible drawings that look like they were traced from Daniel Faraday’s notebook. Let’s take bets on when we think the son will first show his face: I’m saying season finale.

The lady who tells us the son is still alive is Mira — finally a weird, slightly futuristic name! — the leader of the Sixers, a breakaway tribe of people from 2149. They all came on the sixth trip through the portal, leading Taylor to wonder who sent them to break up Terra Nova, and why.

Which, yes! More of this please. Terra Nova’s pilot was at its most tantalizing when it teased us with details of the Sixers. The man versus dino-nature stuff is fine, but if the show is going to grab us, it’ll be because we don’t know whose side to take. None of the principals in Terra Nova are compelling enough to earn our allegiance by default. By the end of the episode, I was already rooting for a Sixers coup, if only so life in Terra Nova would get a little more interesting. If there’s anything I trust the writers to flesh out, it’s the Sixers-Nova conflict: nothing makes better TV than two warring tribes. Just ask Lost. (Again.)

The other compelling piece of Nova: those complex sketches beneath the falls that get trotted out as a cliff-hanger. Despite, as previously mentioned, being ganked directly from Lost, scenes like this show how much promise Terra Nova has: On what other show can advanced physics be considered a cave drawing? It’s in these contrasts of new and old that Terra Nova will hopefully find its voice, and its mystery. So, what do we think those drawings are? A map that leads the way back to 2149? Proof that they’re not in a new timestream after all? Evidence that they’re not actually on Earth? What Terra Nova needs them to be most of all: a blueprint for how a show can please most of us without pandering to the lowest-common denominator?

fan encounters 13 mins ago
Cara Delevingne Hot Girl Summers Too Close to the Sun Attending the BBMAs as Megan Thee Stallion’s plus-one and/or assistant.
hole-some content 1:52 p.m.
Outer Range’s 15 Hole-iest Moments, Ranked Life is short, let’s talk about a hole.
going to hollywood 1:07 p.m.
X Factor Alum Replacing American Idol Winner on The Voice Camila Cabello takes over for Kelly Clarkson this fall.
vulture 10x10 12:00 p.m.
The Hot Puzzle 3-Down, Four Letters: MacGuffin in a heist movie, maybe.
overnights 10:55 a.m.
90 Day Fiancé Recap: Bringing Up Baby Kudos to Emily’s parents for staying out of this fight.
bbmas 2022 9:02 a.m.
The Highs, Lows, and Whoas of the 2022 Billboard Music Awards Whoa: A fever dream of an opening.
since when Yesterday at 10:40 p.m.
Machine Gun Kelly Dedicates 2022 BBMA’s Performance to Wife and Unborn Child And on a Blood Moon, no less.
overnights Yesterday at 10:33 p.m.
Barry Recap: Justice Is Still Attainable If Barry does want to genuinely atone for what he’s done, what does that look like?
overnights Yesterday at 9:00 p.m.
The Real Housewives of Atlanta Recap: Let the Games Begin Playing games with the RHOA cast more often than not ends in orchestrated chaos.
overnights Yesterday at 8:57 p.m.
Gaslit Recap: Hot Tub Backroom-Deal Machine It’s pretty clear that Dean does not like himself right now. Nor should he!
another one Yesterday at 8:52 p.m.
Kourtney Kardashian and Travis Barker (Maybe) Got Married (Again) Maybe this time, we’ll be lucky.
timey wimey Yesterday at 7:20 p.m.
Oi Spaceman! David Tennant and Catherine Tate Are Coming Back to Doctor Who Are we bothered?
snl Yesterday at 7:02 p.m.
SNL Thinks Your Long-Term Boyfriend Is Old Enough to Run Errands All on his own!
2022 bbmas Yesterday at 6:52 p.m.
Here Are the Winners of the 2022 Billboard Music Awards A big night for Ye’s Christian/gospel rep.
snl Yesterday at 5:52 p.m.
Steve Martin Explains the History of the Whoopee Cushion on SNL Along with Selena Gomez!
overnights Yesterday at 3:06 p.m.
Saturday Night Live Recap: Selena Gomez Is Looking for Love Selena Gomez makes her SNL hosting debut in an episode that has more misses than hits.
overnights Yesterday at 2:00 p.m.
Conversations With Friends Recap: Kiss and Tell Bobbi is too self-absorbed to realize Frances has a crush of her own.
overnights Yesterday at 12:00 p.m.
Conversations With Friends Series-Premiere Recap: Just Being Polite We’re back to the Sally Rooney Cinematic Universe, this time investigating the inner lives of four friends/lovers.
yikes Yesterday at 9:00 a.m.
A Warning From the Future About The Time Traveler’s Wife A time-traveling TV critic considers Steven Moffat’s strangely chintzy, tonally odd adaptation of the 2003 novel.
theater review May 14, 2022
A Cherry Orchard That Chops Down Most of the Trees Chucking out the familiar in search of the truth.
More Stories