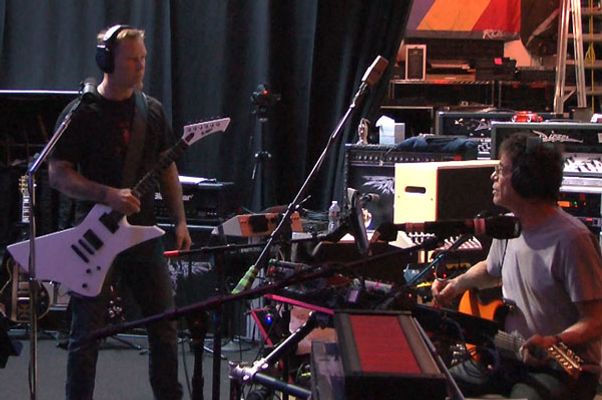 If you are still a little suspicious that the LouTallica collaboration is just a Franco-like performance-art stunt, then the first lines of “The View,” the first song off the joint album Lulu, will do little to reassure you. “I am a chorus of the voices / that gather up the magnets / set before me,” Reed intones over a generic Metallica-y riff. The Insane Clown Posse are not the only people to ever sing about magnets, but it’s hard not to think about them — or about unusual music stunts in general — once this thing gets rolling. Reed spends the full five minutes rambling on about the aforementioned magnets, the truth, and “the coldness of most beauties,” as Metallica strums dutifully in the background. There’s also something about ten stories on a tablet that is Lou Reed? It’s unarguably weird, and certainly not the rager Metallica fans might hope for. But Lou Reed promised us a new planetary system with this album, and one assumes that the Big Bang II can’t all fit in one track. Lulu is due November 1; prepare for a higher understanding then.

overnights 1 min ago
The Real Housewives of Potomac Recap: Take It to da House Somehow, Karen has become the personal steward of everyone’s behavior in this Mia-vs.-Wendy situation.
disrespect the classics 21 mins ago
Bob Dylan Hopes to ‘Rectify’ Book-Signature Controversy ‘Immediately’ After Simon & Schuster offered refunds for $599 auto-signed editions of his new book.
snow jams 9:29 a.m.
The 50 Best Original Christmas Songs Since ‘All I Want for Christmas Is You’ Queen of Christmas, meet your disciples.
last night on late night Yesterday at 11:25 p.m.
John Mellencamp Has No Interest in Doing a Super Bowl Halftime Show He said so on WWHL.
chat room Yesterday at 10:05 p.m.
Leo Woodall Needed Some Time to Digest That White Lotus Reveal “I’d been told I might have a rumble and tumble with a couple of characters, but I didn’t know who.”
overnights Yesterday at 10:03 p.m.
The White Lotus Recap: Whoopsie As family secrets are being kept and revealed back at the resort, a new one is brewing in Palermo.
whodunnit? Yesterday at 10:03 p.m.
The White Lotus Kill or Be Killed Report: Two Can Keep a Secret Well, a couple of names just shot to the top of the suspect/victim list.
overnights Yesterday at 9:15 p.m.
Yellowstone Recap: As Good As Gone The dynamic between Jamie and Beth changes for the first time … ever?
overnights Yesterday at 9:00 p.m.
Dangerous Liaisons Recap: The Sex Dungeon The growing bromance between Camille and Valmont is delightful.
theater review Yesterday at 8:49 p.m.
KPOP Offers a Not-Actually-All-Access Pass A musical about making it big feels neutered by its own backstage process.
justice for booster gold Yesterday at 6:25 p.m.
James Gunn Wants All the DC Movies, TV, and Games ‘Connected’ He and Peter Safran have big plans for the DCU.
coming soon Yesterday at 5:50 p.m.
Helen Mirren Will Travel to 1923 for Yellowstone Prequel A new trailer dropped showing off Mirren and Harrison Ford smoldering at each other.
fancasts Yesterday at 5:40 p.m.
Hey, Antonio Banderas Knows a ‘Fun’ Guy Who Could Play Zorro If he was asked to do a third movie, he would want to pass the mask to this former co-star.
goth girls Yesterday at 4:22 p.m.
Jenna Ortega Didn’t Want to Copy Christina Ricci’s Wednesday According to Ortega, she and her co-star never even said the word Wednesday to each other on set.
performance art? Yesterday at 2:51 p.m.
The 1975’s Matty Healy Is Doing a Lot on Tour From kissing fans to eating raw meat onstage, here’s a roundup of what he’s been up to.
commit to the bit Yesterday at 1:09 p.m.
Martin Scorsese Is in on the Tumblr Memes He has confirmed that he made the nonexistent 1973 film Goncharov.
fame Nov. 26, 2022
Questlove, John Leguizamo, Jennifer Beals, and More Mourn Irene Cara Remembrances poured out across the industry.
charges Nov. 26, 2022
Squid Game’s O Yeong-su Indicted for Sexual Misconduct O claims he merely held a woman’s hand to guide her around a lake.
obits Nov. 26, 2022
‘Fame’ Singer Irene Cara Dead at 63 The multihyphenate sang two Oscar-winning title songs.
overnights Nov. 26, 2022
RuPaul’s Drag Race U.K. Season-Finale Recap: Megamixed Up Drag Race is dancing on the thin line between reality-TV ritual and reality-TV tedium.
More Stories