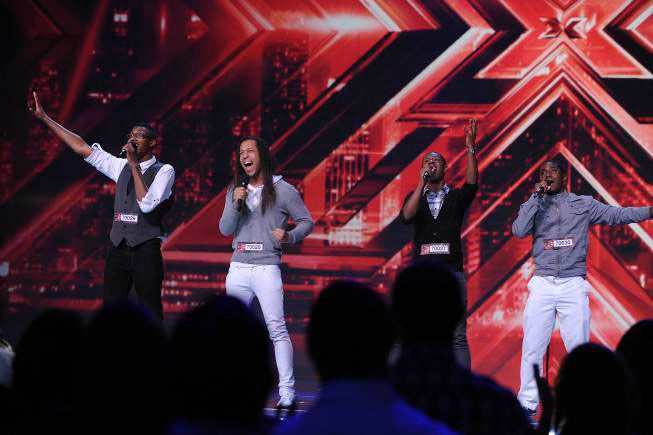 Welcome to week two of The X Factor, a show that is nothing like American Idol except for all of it. Last week’s second episode held on to most of the premiere’s disappointing ratings, which is good news, but not as good as non-disappointing ratings. I think the marketing campaign might be to blame. For months, we’ve been seeing billboards with Simon Cowell’s big angry face and the slogan “It’s time to FACE THE MUSIC,” which is something you tell someone when something long-deserved and unpleasant is about to happen to them. The phrase for sure has the word MUSIC in it, though, so you can see how that might have caused the entire Fox marketing department to overlook the fact that it means the exact opposite of “you will enjoy this.” Tiny details.

Or it could just be that American Idol has trained us to miss the first few episodes of this kind of show because they’re full of goons and sad sacks. Let’s meet some. Please don’t leave my side.

Our show begins with a montage of last week’s standouts: Meth Guy! Woman Who Thinks She’s Too Old! Homeless Soul Guy! It’s a menacing montage, for recapping such a pleasant couple of shows! Did one of them die? Did they all die? If so, is Sly Stone now eligible to try out? They might as well have just set this thing to Philip Glass’s “Koyaanisqatsi.”

Auditions begin in Chicago, where Cheryl Cole rejoins the judging table, because this show is not fudging the timeline at all. First up: Brock and Makenna. He’s a fresh-faced 18-year-old, she might be one of those 30 Amy Poehler character Polaroids from earlier in the week. She talks to him in a manner we can just go ahead and call active-aggressive, he says, “I really like her, maybe someday she’ll know how much” with the passion of a young man who’s been asked by a producer to say, “I really like her, maybe someday she’ll know how much.” They sing “Colder Weather” by the Zac Brown Band, which holds the distinction of being the first song that is all intro. Chicago eats it up. Has Chicago not eaten in a while?

One improvement over American Idol is that the acts’ families/friends/enablers are already backstage watching it all go down, so there’s no phony-baloney “no, I didn’t make it YES I DID THE YELLOW SLIP WAS IN MY HAT” shenanigans. Good riddance, shenanigans.

Yes, it’s still difficult to talk about this show without referencing American Idol, so let’s keep doing it over this montage of losers. It is my understanding that the winner of The X Factor will get a big, splashy Idol-esque debut single. Good. These are never not culture-defining. Especially in this political climate, our country needs to rally around a new standard, like Kelly Clarkson’s “A Moment Like This,” Taylor Hicks’s “Do I Make You Proud?” and Kris Allen’s “Loving You Is Analagous to Having Won a Televised Singing Competition.” (Quick aside: Have you heard the first single from Scotty McCreery’s album? It’s called “The Trouble With Girls,” and evidently the trouble with girls is “they’re so dang pretty.” Yes: all of them! And yes: dang! It reinforces my theory that country has been a parody genre since 1992.)

Back to this show. Skyelor Anderson is an African-very-American country kid who says “Git ‘er done.” It’s weird. Weirder still, there appears to be a logo on his ball cap that Fox didn’t clear and a PA didn’t put gaffer’s tape over, so they zoom in super–Silence of the Lambs close on him. His track goes out right in the middle, but he continues to sing, which is apparently a heroic act. The judges commend him for it and also find delicate ways to say it’s alarming to see a black teenage boy sing country. He’s through.

Still not sure what is at the other side of “through,” but I do know that those who get there will be broken into four groups: boys, girls, over thirties, and groups. And I love the implication that people over 30 are genderless.

Then there’s J. Mark, who lives in Europe getting his doctorate in philosophy, which he illustrates by writing pages of equations. He doesn’t want to be “a cookie cutter that was made in a factory.” No, he sees his life as “more like an algorithm for Pi.” Now, I’m no philosopher, but I’m pretty sure that’s not how you would say that. Anyway. He robo-dances to Radiohead’s “Creep,” the title of which he thought was a command. J. Mark gets through, despite not being able to sing. God help us. It’s been killing me trying to determine who J. Mark looks like, and I just figured it out: that guy I went to college with who always looked like he was wet. Remember him?

Anyway, between J. Mark and the next few weirdos, it’s starting to become clear: holding auditions in Chicago means meeting thousands of people who’ve been asked to retake level one at Second City.

Josh Krajcik works in a burrito restaurant and “come(s) home smelling like onions and burritos,” which is right in line with my immediate suspicion about Josh Krajcik. Josh’s mother has come along with him. Josh’s mother is what happens when you tell Kristen Wiig to turn it up a notch. Josh sings “At Last,” which he’s evidently been told is about killing a girl. The crowd goes wild. Oh thank God. If he doesn’t become a famous singer, Josh and his mom are an onion-and-burrito-scented Grey Gardens situation waiting to happen.

And then we’re off to Seattle! Good-bye again, Cheryl Cole! (She seems perfectly suited to this job! Did she murder a stagehand?) Nicole Scherzinger says, “We hope we find some great talent here; we’re nothing without the talent,” which raises the question: “What are you?” Paula injures herself attempting to operate a bracelet. This bodes well.

Seattle has enough talent to justify Nicole Scherzinger’s existence. Drew Ryniewicz is a 14-year-old Justin Bieber fan who has a faux-hawked little brother straight out of a Nickelodeon sitcom. (Li’l Stinkerz, say, or Stop Zappin’ Me!) She longs to sing with Justin Bieber, which there is a 100 percent chance she will do in the final episode of this season. She gives his song “Baby” a good Feisting and makes it through handily.

Peet Montzingo is the six-foot-one child of dwarves! His mom reveals that he grew up wanting to be a dwarf like his parents and siblings, because “he always felt like the oddball in the family.” It’s just like growing up gay, which he also totally is. Peet sings a modified version of that “Billionaire” song in which he substitutes the word “famous” for “billionaire,” but everything else is pretty much the same, so you kind of wonder why he bothered, and then you keep doing it because it is more pleasant than listening to him sing. The judges tell him no, but they all agree he could be famous, which is really a lot less of a compliment these days when you think about it.

Goddammit, you guys. This show is LONG. I’ll skim the next few people:
• 4 Shore, for those of you who found Boyz II Men’s vocal on End of The Road too subdued. IN!
• Elaine Gibbs, 53, kind of looks like Star Jones but can totally sing, which kind of makes me resent Star Jones that much more. IN!
• Francesca Duncan, 17. I am looking at her and forgetting her at the same time. IN!
• Tiger Budbill, 42-year-old wedding D.J., shouty. IN!
• Philip Lomax, 21-year-old who somehow manages to be more irritating than a wedding D.J. twice his age. IN! ABSOLUTELY CANNOT SING AT ALL.

And finally, sassy deli clerk Tia Tolliver, whom the boy judges like and the girl judges don’t, and it kind of looks like the girls’ no votes will keep her out of the next round, but then Nicole changes her mind because we all know what happened to Cheryl Cole. Tomorrow: more of this!