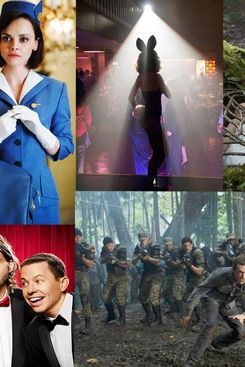 Every new scripted show is an expensive roll of the dice, but on TV, not all risks are created equal. For example, nobody on CBS is gonna get in trouble for daring to put a crime procedural produced by J.J. Abrams (Person of Interest) in the longtime slot of CSI. By contrast, it takes a certain size pair of cojones to soak around $20 million into one two-hour pilot for a show about dinosaurs and time travelers, or to decide that what Americans really want to see is an hour featuring Snow White and Pinocchio as workplace colleagues. Here are the five shows (four new and one returning) that are this season’s biggest gambles.

The Five Biggest Risks of the New Fall TV Season

the law 12 mins ago
California’s Landmark Rap Lyrics Bill Is Now State Law Gov. Gavin Newsom has signed legislation that limits the use of rap lyrics as evidence in court.
statements 8:27 p.m.
Angelina Jolie, Nazanin Boniadi, and More Speak Out Against Mahsa Amini’s Death “Respect to the brave, defiant, fearless women of Iran.”
chat room 6:25 p.m.
Justin Long Talks Barbarian Spoilers and the Longaissance “I’ve heard ‘Oh, so you’re still acting?’ so many times. This helps make up for those moments.”
dinner party 5:48 p.m.
Where Are You Sitting This Week? Will it be with Paramore and Perry Green or Ravyn Lenae and Ryan Murphy?
fire and blood 5:37 p.m.
The Casting Challenge Behind House of the Dragon’s 10-Year Time Jump How the series’ casting director navigated a time-lapsed, multigenerational plot.
a kwanzaa miracle 5:17 p.m.
Coolio Recorded a Kwanzaabot Cameo for the Upcoming Futurama Revival “Coolio was one of my favorite guests,” Futurama’s executive producer said.
she's not wrong 3:51 p.m.
Reese Witherspoon Is Pretty Sure People Prefer Nancy Meyers Over ‘Auteur’ Movies “You see an auteur movie once.”
remembrances 3:49 p.m.
The Mid-’90s Belonged to Coolio The late rapper achieved global fame without turning his back on his Compton roots.
By Brandon Caldwell
overnights 3:42 p.m.
Bad Sisters Recap: Like a Swedish Norman Bates Did Becka do it? Or did she do something much worse by mistake?
overnights 3:38 p.m.
The Great British Baking Show Recap: Swede, Swede Victory This year’s Bread Week features minimal bread baking and an eerily empty tent.
movie review 3:31 p.m.
Smile Should Smile More The new horror film starts out in a wonderfully creepy and inventive fashion but eventually devolves into generic horror tedium.
By Bilge Ebiri
vulture lists 3:30 p.m.
The 21 Best Witch Movies of All Time From The Craft to The Wizard of Oz to Hocus Pocus.
overnights 3:16 p.m.
The Devil Is a Part-timer! Season-Finale Recap: The End … for Now? Was this season worth the nine-year wait? Absolutely not.
overnights 3:08 p.m.
Ramy Recap: What Counts As Home? Ramy goes to Israel.
witch way to broadway? 2:58 p.m.
Hocus Pocus Musical Could Run Amok, Amok, Amok on Broadway Which millennial theater kid got ahold of a spell book?
chat room 2:00 p.m.
Ashley McBryde Invited Some Friends to Make Her New Fictional-Town Album “Somebody’s making a salad, somebody’s shooting tequila, someone’s smoking a joint, and one of us is like, ‘I have a jingle for a funeral home!’”
By Dan Hyman
now streaming 1:59 p.m.
The 8 Best Movies and TV Shows to Watch This Weekend The witches are back in town.
walk walk fashion baby 1:40 p.m.
Karl Lagerfeld’s Legacy Is the 2023 Met Gala Theme Celebrities, start brainstorming looks now.
music review 1:21 p.m.
Tyshawn Sorey’s Rituals Take Over the Armory The sound of Monochromatic Light.
funny videos of the month 1:00 p.m.
The Best Comedy Shorts of September 2022 Rounding up our favorite funny videos of the month.
By Luke Kelly-Clyne and Graham Techler
More Stories