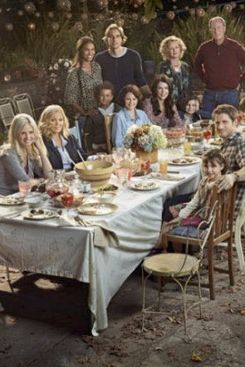 Even the most loyal TV fan can’t watch everything, and sometimes good shows pass you by. Don’t blame yourself: It’s the nature of the beast, the price of living in an era when there’s more television on in one night than was on in a whole year a generation ago. Often it only takes one missed season to write a show off: No matter how many times you hear it raved about, it just seems too daunting to think about backtracking on an existing series when so many other shows are being stockpiled by your DVR. But it doesn’t always need to be this way! We’ve selected seven existing, fantastic shows that you can still get in on while they’re as good or better than they’ve ever been, just by using our quick tutorial and study guide of three past episodes each: With that small amount of viewing, you’ll be able to know just what these shows are about and can easily hop aboard for the new round of episodes. You can’t afford not to watch more TV.

chat room 14 mins ago
Sex Lives of College Girls’ Pauline Chalamet Defends Kimberly’s Choice “When we’re 18, we’re allowed to start making decisions as adults without fully understanding the ramifications.”
new music 10:15 a.m.
SZA Puts Fans on Alert, Announces New Album S.O.S She revealed the release date during her SNL performance.
mom-ologues 10:03 a.m.
Keke Palmer Turned Her SNL Monologue Into a Pregnancy Reveal Baby, this is Keke Palmer’s baby bump.
trailer mix Yesterday at 4:37 p.m.
Watch the Trailer for HBO’s The Last of Us It’s reluctant sci-fi father figure number two for Pedro Pascal.
coming soon Yesterday at 2:21 p.m.
DC Studios Releases First Look at Blue Beetle’s Alien Scarab Cobra Kai’s Xolo Maridueña will star as the DCU’s first Latinx superhero in Blue Beetle.
art is a prank Yesterday at 1:22 p.m.
Art Basel Is Trolling the Rich Again From the makers of “Banana Duct Taped to Wall” comes an ATM that ranks your wealth.
gma3 goss: what you need to know Yesterday at 12:57 p.m.
This Good Morning America Drama Is Better Than The Morning Show GMA3 co-anchors T.J. Holmes and Amy Robach have reportedly been dating for who knows how long.
tv review Yesterday at 10:00 a.m.
Michael Shannon and Jessica Chastain Make George & Tammy Sing The stars take what could have been a run-of-the-mill music biopic and infuse it with passion.
christmas music Yesterday at 9:00 a.m.
The 10 Best Versions of ‘Winter Wonderland’ The idiosyncratic yet charming classic that everyone from Ella Fitzgerald to Selena Gomez can agree on.
humbled Yesterday at 2:00 a.m.
John Krasinski’s Kids Think He’s Just Some Guy Who works in an actual office, and whom Emily Blunt married “out of charity.”
overnights Dec. 2, 2022
We’re Here Recap: ‘And I Am Telling You I Am Not Going’ A stop in Jackson, Mississippi, yields oceans of tears and a standout performance.
bye twitter Dec. 2, 2022
All the Celebs Who Left Twitter “This place is a mess.”
her man her man her man Dec. 2, 2022
Cher Knows Her New Relationship Might Seem ‘Kind of Ridiculous’ She’s 40 years older than her “fabulous” new boyfriend, Alexander Edwards.
never again Dec. 2, 2022
Hellboy Taught David Harbour ‘Not to F- - - With’ Beloved IP A hell of a lesson.
tributes Dec. 2, 2022
The Music Industry Mourns Fleetwood Mac’s Christine McVie Even Bill Clinton said goodbye to the Songbird.
gma3 goss: what you need to know Dec. 2, 2022
Sorry, Were We Interrupting Something on GMA3? T.J. Holmes and Amy Robach were a giggly duo of hosts for the first time since news of their relationship broke.
villainous behavior Dec. 2, 2022
Los Espookys Canceled by HBO, Enemies of the Moon HBO needs to sit in the corner and think about what they’ve done.
oscar futures Dec. 2, 2022
Oscar Futures: Is the Academy Ready to Forgive Will Smith? He’s banned from the ceremony for the next ten years, but could Will Smith nab a nomination for Emancipation anyway?
By Nate Jones
tributes Dec. 2, 2022
Takeoff’s First Posthumous Verse Appears on Metro Boomin’s New Album Alongside A$AP Rocky on “Feel the Fiyaaaah”
power rankings Dec. 2, 2022
The Final Survivor Season-43 Power Ranking A last look at who is in the best position to win it all.
More Stories