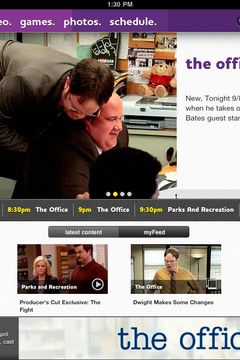 This week: proof NBC doesn’t care if you pay for Hulu, free music you’ve never heard of, an alternative to Pandora on the iPhone, Ayn Rand on the iPad, and personalized 3-D glasses.

In case you needed any more proof that TV networks think you’re stupid, compare NBC’s iPad app to Hulu’s. NBC’s streams the past few episodes of 30 Rock, Community, Parenthood, etc., all for free. Hulu’s streams the past few episodes of 30 Rock, Community, Parenthood, etc., all for $7.99 per month. We’d call it an innocuous loophole if NBC weren’t also a part-owner of Hulu. So instead, what we have is NBC trying to swindle you into paying for the right to stream its shows in one location even while it streams them for free elsewhere. We’d be surprised, except ABC, also a co-owner of Hulu, has been doing the same thing for a while with its app. At least we know the condescension is endemic to all of Hollywood.Price: Free
For those who don’t want to spend $3 for the Hype Machine iPhone app, here’s a free app that’ll introduce you to similarly obscure tracks. Gimme Music starts you off with ten tracks from bands you — or at least Vulture Bytes — have never heard of. Our first set of songs was a mix of Euro dance-trance-pop and Jesus-exalting Americana. It’s an app for those who are so busy adding new tracks to their library they never get around to listening to any of them more than once.Price: Free
We’ve tried to tell you before how amazing Turntable.fm is, so we won’t do it again. Just know if you aren’t signed up, you’re missing out on the best way to stream random music online, whether it’s with friends or strangers. And now Turntable is also streaming on your phone, where it has become the best curated-radio app on a mobile device. It may not have the relentless uniformity of Pandora, but it also has the warmth that comes from a human-curated playlist. You can listen either to something made by man or made by machines; take your pick.Price: Free
Because a horrific film adaptation wasn’t enough, Atlas Shrugged is once again trying to make itself relevant. This time it’s through an e-book that’s masked as an iPad app. It’s more than just the book, of course; it’s practically an Ayn Rand library. Audio lectures! Archival footage! Handwritten manuscripts! This is the digital collector’s edition for people who are probably so obsessed with Ayn Rand that they’ve already collected everything inside of it. Which makes this the equivalent of a DVD rerelease. Everything is there that was there originally, but it’s remastered, plus there’s a smattering of special features that are being collected in one place for the first time. Diehards won’t be able to stay away. The rest of us? We’ll keep wondering about this John Galt character. Price: $15
One fad meets another: 3-D glasses that clip on to the ones you’re already wearing. It may be that you never watch another 3-D movie in your life (likely because you’ve realized that buying a 3-D ticket means you’re paying extra money to watch a darker screen). But how better to remember the great cinematic trend of the early aughts than by buying this keepsake? The clip-ons are under $20 and will likely still work when Hollywood has a 3-D revival in ten years. In the meantime, you can still trot them out every time a new Transformers is released. Price: $19

Vulture Bytes: Turntable.fm for Your iPhone and 30 Rock for Your iPad