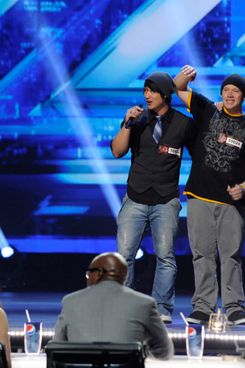 Simon Cowell’s The X Factor drew a large crowd Wednesday, but it was not the ratings monster Fox may have dreamed about or that its rivals had feared. Per preliminary national Nielsen data, X was watched by 12.1 million viewers from 8 to 10 p.m. and averaged a 4.2 rating with viewers under 50. In overall audience, that’s the biggest tune-in for a Fox fall show in five years (New Girl and other shows have been bigger in the 18 to 49 demo), but it wasn’t enough to beat ABC’s supersize comedies, Modern Family and The Middle. The former scored a monstrous 6.0 demo rating and averaged 14.3 million viewers, while the latter drew a 3.0 in the demo and just under 10 million. Elsewhere in the Nielsens, NBC’s Up All Night had a solid showing at 8 p.m., but Free Agents collapsed at 8:30 p.m. (Hank Azaria should make sure his contract for The Simpsons is up to date). And at 10 p.m., Revenge took advantage of its big MF lead-in and won its hour. Check back in a bit for complete details in Your TV Ratings Explained.

X Factor Does Well, But Not That Well, in Ratings

family business 17 mins ago
Fidel Castro’s Daughter Approves of James Franco Playing Her Dad In Alina of Cuba, the biopic based on her life.
overnights 11:35 a.m.
Evil Recap: State of Grace Talk about paying through the nose.
accidents 12:24 a.m.
Anne Heche in Stable Condition Following Car Crash Heche reportedly crashed her car into a Los Angeles home.
hot dogtorate Yesterday at 4:32 p.m.
That’s Doctor Michelle Yeoh to You Michelle Yeoh will receive a doctorate of fine arts from the American Film Institute.
overnights Yesterday at 3:00 p.m.
The Sandman Recap: A Death in the Family It takes a visit with Death for Dream to learn how to live más.
overnights Yesterday at 12:46 p.m.
RuPaul’s Drag Race Down Under Recap: Not So Groovy One of the show’s most delicious elimination narratives in recent memory.
remix city Yesterday at 12:27 p.m.
Beyoncé Drops New ‘Break My Soul’ Remix With Madonna It’s time to vogue!
overnights Yesterday at 12:00 p.m.
The Sandman Recap: Darker and Edgier Dream finally learns that tools can be traps.
overnights Yesterday at 9:00 a.m.
The Sandman Recap: Go to Hell The Sandman goes to a hot place where Dream and Lucifer have a rap battle.
vmas 2022 Yesterday at 1:10 a.m.
Anitta and J Balvin Will Take the VMA Stage Watch them live on August 28.
overnights Aug. 5, 2022
The Rehearsal Recap: I Don’t Like Lying to People The Rehearsal’s most intense episode shows just how far Nathan is willing to go.
break-ups Aug. 5, 2022
Kim Kardashian Reportedly Resigned As Queen of Staten Island Her nine-month relationship with Pete Davidson is allegedly done.
overnights Aug. 5, 2022
The Devil Is a Part-Timer! Recap: A Toddler Turned Into a Sword! This week, the show takes a huge dip in animation.
dinner party Aug. 5, 2022
Where Are You Sitting This Week? Will it be with the conspiracist, the clergyman, or Caucasian Castro?
this friggin guy Aug. 5, 2022
Johnny Depp and Jeff Beck Stole Lyrics From an Incarcerated Folk-Poet Hack Sparrow.
overnights Aug. 5, 2022
Pretty Little Liars: Original Sin Recap: Psycho Killer It’s Halloween, which means it’s time for a rager and hormonal confrontations.
follow friday Aug. 5, 2022
Jenson Titus and His Beautiful Bagel Eyes We chatted with the comedian and artist on Instagram Live.
kanye 2020 Aug. 5, 2022
John Legend’s Friendship With Ye Strained Over Politics “He was upset that I didn’t support his run for presidency of the United States of America.”
here's jason Aug. 5, 2022
Summer-Camp Horror Movies to Stream From Your Bunk Rickety canoes, teen debauchery, and lots of fake blood.
overnights Aug. 5, 2022
The Sandman Recap: Meet Ms. Constantine Dream and Johanna Constantine are peas in a sexy, trenchcoat-clad pod.
More Stories