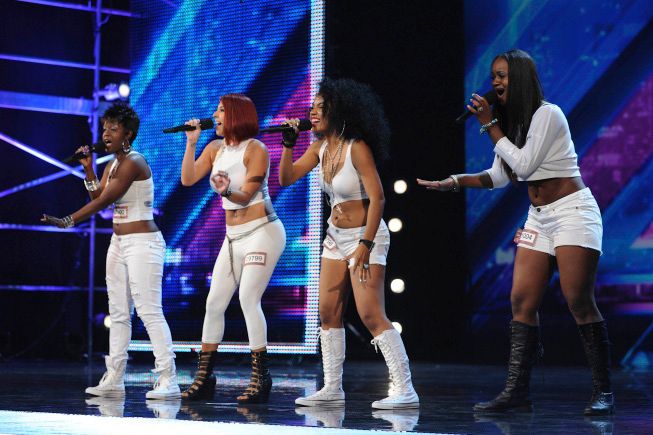 It seems last night’s premiere of The X Factor was not quite the ratings bonanza Fox had hoped for. And I can see why: It looks like American Idol, which looks like The Voice, which looks like The Sing-Off, which looks like American Juniors. We are not wanting for singing competitions these days. But let me tell you something: Simon Cowell and his producing partners Cecile Coot-Frottage and Nigel Darkwynge or whatever are not to be underestimated. Tonight, The X Factor actually managed to surprise me at least twice, and I don’t know how to feel about it. Obviously, they did a bunch of things we’ve seen a million times first. May I recap them for you?

First stop: MIAMI! A city whose contributions to music run “from Gloria Estefan to Flo Rida.” That’s right: Miami’s music scene runs the gamut from the woman whose job description is “be from Miami” to the man who is named FLORIDA. Bienvenido a Miami!

Outside the audition venue, a security guard warns the crowd: “No outside food and drinks! Your hopes and dreams is the only things that’s allowed in with you!” It’s a nice update of Quincy Jones’s famous “Check your ego at the door” admonition from the “We Are the World” sessions.

First up is Ashley Sansone, a “starving artist” who doesn’t want to be “some kind of cornball, singing some song about Gummi Bears.” Sorry, Trolli board of directors. Ashley yaps all the way in, all the way through, right over her rejection, and all the way out. It’s going to be that kind of night.

Next we meet hairdresser Chanel Simone Dixon, who is British for some reason. She is rejected quickly, but her failure does not discourage her. She promises that she will only stop singing “if I die.” Chanel is on the fence about her own mortality.

And then we meet Nick Voss, who has carved lines in his temples and right eyebrow, Vanilla Ice–style. Is it time for that style to come back? Are we sure? He brings his sister, who might be Neve Campbell. Nick shouts his way through Elvis Presley’s “Trouble” and does some Alphonso Ribiero dance moves. (Pre-Carlton.) A crowd shot settles on a preteen girl, who closes her eyes and nods sagely. “This kid’s got it,” young Madison is thinking. We’re all talent scouts now.

He gets through. He’s cute. He gets in the box that looks like soap-opera Heaven and says, “I feel like I saved the day for my family.” Take it easy, Nick. Save your right eyebrow first.

The judges insist on asking the auditioners whether their lives would change if they won $5 million. I think we can assume that everyone will answer that question in the affirmative. They should just ask: “Would you agree that $5 million is a large sum of money?”

Let’s talk a bit more about those judges:

L.A. Reid confirms my theory that Randy Jackson is history’s luckiest man. L.A. has the knowledge and clarity Randy lacks; plus, when he’s really enjoying a singer, he closes his eyes, grimaces, and jerks his arms all around, like a weird old professor appreciating classical music. It’s great to watch.

I don’t know what Simon has done with his face, but he’s done something. He’s giving me a Jo Ann Worley effect. He’s also a bit nicer, maybe because there are so many people around, and when the revolution comes, he knows he’ll be the first to burn.

Our culture is actively trying to find a place to put Nicole Scherzinger. She is nice to look at, she sings fairly well, she was an efficient Pussycat Doll, but where does she fit? It’s like she’s been in a decade-long celebrity internship program. We need to decide whether there’s a permanent position for her here; Gayle in HR is breathing down my neck.

And then there’s Steve Jones. We haven’t seen much of him so far, but I think I like him. He keeps the show moving, and there is evidence of a working brain behind those eyes. It’s a nice change. He’s also worlds apart from Ryan Seacrest in that you can picture him just absolutely giving it to someone. He fine, is what I’m saying.

One unwelcome change: When we cut to commercial, there’s nothing like the soothing Cathy Dennis oo-whoa-oo-whoa-oh of American Idol. The X Factor’s bumper music just goes: THUMP.

Steve packs the show into its three massive trucks and it’s off to Dallas for more auditions. This is starting to feel like homework.

Fourteen-year-old Ashley Deckerd reveals that she’s an amateur ghost-hunter, which is just the kind of comedy softball a show like this will swing at. But first, we see Ashley chatting with some similar-aged young hopefuls, who ask her, “What’s the creepiest ghost you’ve ever seen?” She replies: “One crawled at me,” and the girls jump right out of their chairs. Jesus Christ, girls. Settle down.

After Ashley’s unsuccessful audition, the lights in the auditorium start to blink. Because ghosts! It’s all set to an off-brand rendition of the theme from Ghostbusters. Did Ray Parker Jr. ask for that much money? Overall, this is some Nick & Jessica Christmas Special–level comedy here. Keep it up, guys. Busting makes me feel good.

Melanie Amaro is a college freshman whose family speaks exclusively in lines from the third acts of sports movies. “Get out there and prove yourself.” “Use what God gave you.” “I’ll take Foods That Begin With the Letter Q, Alex.” Whatever — it works. She sings “Listen,” the song they added to the Dreamgirls movie so Beyoncé could finally get some attention. “Listen” is the most on-the-nose show tune of all-time, and the crowd loves it. Four enthusiastic yeses. She will go far. Yelling is huge right now.

Jonny Rogers is 17. His mom warns him not to dance onstage, but like Kenny Wormald in the classic film Footloose, he cannot help it. His original song and choreography are rough, but — you know how when Shakira is dancing, she has that look on her face that says, “Can you believe what I’m doing with my butt?” Jonny has that look. It’s infectious.

Now for the surprise part: 18-year-old Dylan Lawson has the kind of doughy farmboy good looks, hard-luck story, and apparent passion for music that make me take notice. He’s sold his truck to come to Dallas. He’s worn his fanciest T-shirt. I’m ready, Dylan. Let’s do this.

And then he yell-raps some Li’l Wayne and jumps around the stage like a jerk. Oh no; it was a joke audition. I got got. And I am not new to this, people; I can smell a rat a mile off. But not tonight. Goddammit. Words cannot express how it feels to get legitimately took by a show like The X Factor. I’m losing my edge to the kids from SyCo Entertainment.

A grown man named Phoenix makes some kind of didgeridoo/ululation combo sound for much too long, and it reminds me of when they used to play metal records backwards on Donahue to convince you they were saying “SATAN.” He and his terrible mouth noise do not make it through. Get thee behind me, Phoenix.

Dexter Haygood wears an airbrushed denim jacket and his mother’s fanciest shoes, and he reveals that he was the lead singer of an eighties band called Xavion. Wait a minute: I remember Xavion! KYMC in St. Louis played their single “Eat Your Heart Out” for a few weeks in 1984! You can see and hear it here! It’s kind of a fun song, even if people had stopped saying “eat your heart out” by 1981 at the latest! Things have gone downhill since Xavion, it seems. Dexter Haygood is a guy who needs a second chance. His choice of songs (and jackets [and shoes]) bespeaks some bad decision-making patterns, but he makes it through.

(Through to what? They haven’t really said yet. Heaven?)

Bringing us home is Xander Alexander, which is short for the Reason I Rarely Go to West Hollywood Gay Bars Incarnate. There’s so much and also so little to say about Xander Alexander. He is reflexively bitchy and unpleasant, yet when he is asked to perform, he becomes nervous and needy. Also, he wears silly string and sings Edwin McCain. He is the worst. Needless to say, they focus on him for about twenty minutes.

And there it is. I got fooled, I reconnected with a forgotten old friend, and I caught a look at the vulnerability that makes so many gay guys so awful. That’s enough for one episode. See you next week, unless this show gets cancelled.

The X Factor Recap: Dave Holmes on Joke Auditions and a Singing Ghost-Hunter