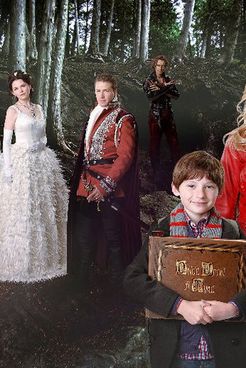 Jiminy Cricket, ABC’s got itself a hit. The network’s Once Upon a Time turned in a fairy-tale Nielsen performance in its second week, attracting 11.6 million viewers and averaging a 3.9 rating among viewers under 50. While down about 10 percent from last week’s overall tune-in of 12.8 million, it matches the show’s demo debut. Even more impressively, Once beat series programming on both CBS and Fox in the 8 p.m. hour, and added viewers throughout its broadcast. (It’s turning out to be a good fall for fantasy on TV: NBC’s Grimm did reasonably well in its first outing Friday.) Meanwhile, the news wasn’t so great for Fox’s new Jonah Hill–bred toon Allen Gregory: It drew just 4.7 million viewers in its first outing Sunday, down from the 8 million who watched The Simpsons Treehouse of Horror MCMXII at 8 p.m. It suffered a similar 40 percent decline among adults 18 to 49 as well. Good thing Fox has more Bob’s Burgers on the grill!

ABC’s Once Has a Second Good Week in the Ratings

had to get away 11 mins ago
The White Lotus Season Two Booked Its Italian Vacation for October 30 The trailer features cheating, drugs, more cheating, and the delightful Meghann Fahy.
rankings 15 mins ago
All 193 Taylor Swift Songs, Ranked There are at least ten stone-cold classics in her discography.
By Nate Jones
into the groove 12:43 p.m.
Charlie Puth Is ‘So Inspired’ by ‘LGBTQ+ Culture’ Driving through West Hollywood will do that to a person.
1.5x speed 12:36 p.m.
An Art-World Scandal (and 6 More Podcasts Worth Checking Out) Death of an Artist, Blowback, and more.
role call 12:10 p.m.
William H. Macy Answers Every Question We Have About Boogie Nights On his visit to a porn set, Burt Reynolds’s “clueless” attitude, and making Paul Thomas Anderson laugh — and smell — during that killer shot.
By Derek Lawrence
overnights 12:06 p.m.
Abbott Elementary Recap: Corny Legends Even Janine, who was once in a Degrassi reenactment group, can see that the Story Samurais are peak corny.
vulture 10x10 12:00 p.m.
The Northern Puzzle 18-Across, Four Letters: Oft-killed-off actor Bean.
hey! 11:45 a.m.
Some Pretty Major News: Vulture’s Weekly Comedy Show Is Back We returned to Union Hall on every other Tuesday night — check here each week for the latest lineups.
glovely 11:23 a.m.
Chill, Normal Guy Jared Leto to Play Chill, Normal Guy Karl Lagerfeld A fitting Morbius follow-up.
coming soon 11:07 a.m.
AHS: NYC? I’m OMW The new teaser is low on plot but heavy on leather.
last night on late night 11:01 a.m.
Betty Boop’s Booking Fee Was Too High for Los Espookys It’s okay — we hear she’s a diva on set anyway.
overnights 10:39 a.m.
The Good Fight Recap: Fili-busted! “Ginni Thomas” guest stars in this ambitious but unsuccessful episode.
overnights 10:32 a.m.
Real Housewives of Beverly Hills Season-Finale: The Ghost of Kathy’s Future It’s so hard to leave a season like this — in the middle of everything.
chat room 10:14 a.m.
Alvvays’s Molly Rankin Doesn’t Like Being Out-Quizzed on Her Own Album Alvvays’s latest name-checks Haruki Murakami, Murder, She Wrote, and (possibly?) a key change from Belinda Carlisle’s “Heaven Is a Place on Earth.”
awards 10:14 a.m.
Autofiction Writer Annie Ernaux Awarded the Nobel Prize in Literature Best known for her memoir The Years.
best of 2022 9:00 a.m.
The Best Songs of 2022 (So Far) From grungy garage rock to funky self-worth anthems and emotional electropop, these are the songs we’re playing on repeat.
overnights 8:00 a.m.
The Kardashians Recap: High Fashion While Kim tries on all the Prada, Kris tries out all the gummies.
welcome to oasis springs 8:00 a.m.
I Made Everyone From Don’t Worry Darling Into Sims Just like in the movie, no one is aware they’re in a simulation designed for one person’s sick pleasure — namely, mine.
By Bethy Squires
last night on late night 12:21 a.m.
Trevor Noah Is Mad About How Dark That House of the Dragon Episode Was Too While he still has a platform, Noah is going to be fighting for what really matters.
midnights era 12:03 a.m.
Wait, Is Taylor Swift Just Giving Us Straight Answers? Not like the videogame. Or maybe exactly like the video game?!
More Stories