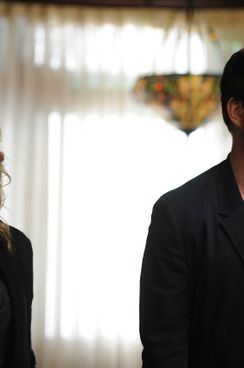 FX’s much-hyped American Horror Story is off to a solid but not spectacular start in the ratings. Per preliminary national Nielsen numbers provided by FX, the Ryan Murphy–Brad Falchuk psycho-thriller averaged 3.2 million viewers at 10 p.m. Wednesday, with 2 million of said audience under the age of 50. Compared to last fall’s dead-on-arrival Terriers, this is a major triumph: That critically lauded show earned only 1.6 million viewers (and just 659,000 in under-50s) in its initial telecast and was eventually canceled. But AHS came in well below several other past FX debuts, including the 2010 spring debut of Justified, which brought in more than 4 million viewers. Other FX series with higher initial audiences: Rescue Me, Over There, and Dirt. On the positive tip, AHS skewed younger than most of those series, with the 2 million tune-in among those under 50 higher than the debuts of all of the aforementioned series (except Justified, whose demo score AHS matched). FX also notes that when you add in the two reruns of AHS FX aired last night, viewership for the show climbs to more than 5 million (3.2 million under 50); it expects the number to climb even higher once data from DVRs is added in. “We know that when the [DVR] ratings come in, that of the 13 drama series FX has premiered, AHS will rank at least number two all-time in Adults 18-49 behind The Shield, and there is a possibility that it could be our highest ever,” FX chief John Landgraf said.

best of 2022 4 mins ago
The Best Comedy Specials of 2022 (So Far) There has been a shift back to big, ambitious projects and confident theater performances. Here are the most notable.
By Kathryn VanArendonk
movie review 7 mins ago
Triangle of Sadness’s Class Satire Reaches Hazardous Levels of Smug This year’s Palme d’Or winner is a total drag.
By Alison Willmore
my single is dropping 14 mins ago
Nickelback Asks the Burning Question: Remember the ’80s? They made their own “1985.”
testimonies 25 mins ago
‘I Screamed’: Kevin Spacey Trial Witness Describes Alleged Assault Andy Holtzman claims he was attacked at the Public Theater.
oscar futures 2:15 p.m.
Oscar Futures: A Tár Is Born? Cate Blanchett is getting raves as a manipulative maestro in Todd Field’s drama. Could she get her third trophy, too?
By Nate Jones
overnights 2:04 p.m.
RuPaul’s Drag Race U.K. Recap: The Bingo Ball Okay, it’s time for a sewing challenge, time to find out who can’t sew —oh, wait, it’s everyone? No one can sew?
he's running (for cardio) 1:48 p.m.
The Rock Refuses to Be America’s Daddy As the father of daughters, a presidential run is “off the table.”
animation 1:45 p.m.
Chainsaw Man Lives, and It Demands an Explanation The new anime feels like Sam Raimi by way of Charles Dickens.
chat room 1:20 p.m.
Saoirse-Monica Jackson’s Cousin Inspired Her Over-the-Top Derry Girls Reactions “I have definitely aged myself from playing Erin Quinn, because I’ve stretched my face so much.”
the law 1:00 p.m.
The Danny Masterson Rape Trial and Scientology Experts explain its potential impact on the church.
buffering 1:00 p.m.
Susan Zirinsky Knows a Thing or Two About What Viewers Want The 11 Minutes exec producer on making the leap to from broadcast news to streaming.
today on daytime 12:16 p.m.
Lea Michele Marched Her Band Out to Good Morning America For a new version of the song you’ve heard her sing before.
vulture 10x10 12:00 p.m.
The Catholic Puzzle 20-Across, Four Letters: Target of Gru’s Despicable Me heist.
two friends 12:00 p.m.
‘We’re Still Here’ The country-music industry tried to turn Rissi Palmer and Miko Marks into rivals. It failed.
now streaming 12:00 p.m.
The 15 Best Anime Movies on Netflix Right Now Visionary directors, striking anthologies, and giant robots await.
overnights 11:56 a.m.
Grey’s Anatomy Season-Premiere Recap: New Kids on the Block An intriguing batch of “bottom of the barrel” interns suggests this show might just pull off the obvious retooling it’s going for.
my soundtrack song is dropping 11:12 a.m.
Fiona Apple Forged a New Song for Rings of Power “Where the Shadows Lie,” based on the Ring-verse.
this week in late night 10:49 a.m.
A Hurt and Angry Roy Wood Jr. Won Late Night This Week Plus Sabrina Wu on The Tonight Show and the return of The Amber Ruffin Show.
i want your midnights 10:43 a.m.
Everything We Know About Taylor Swift’s Midnights Including the full track list and (!) Lana Del Rey collab.
overnights 10:30 a.m.
The Midnight Club Recap: Petting Zoo It’s Family Day at Brightcliffe!
More Stories