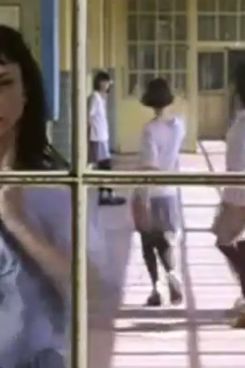 Beyoncé’s video for “Countdown” has been getting some attention not only for being awesome, but for its similarities to a dance piece by Belgian choreographer Anne Teresa De Keersmaeker. In an interview with MTV, Adria Petty, director of “Countdown” and daughter of Tom, said about making the video: “I brought Beyoncé a number of references and we picked some out together. Most were German modern-dance references, believe it or not,” suggesting that the video’s similarities to De Keersmaeker’s work are intentional. De Keersmaeker, however, was never told her choreography would be used in “Countdown” and has written a piece responding to it.

rebound mansion 17 mins ago
A-Rod, the Poor Thing, Rents a Hamptons Mansion a Mile from J.Lo He’s a three-minute drive away.
health 27 mins ago
Actor James Michael Tyler, Friends’ Gunther, Discloses Stage 4 Cancer Diagnosis Three years after finding out at a routine physical, the actor says he can no longer walk.
housewives institute bulletin 29 mins ago
A Real Housewives Nude Model Bares All Plus, Heather Dubrow is back, and The Housewife and the Hustler makes a splash, in this edition of the Housewives Institute Bulletin.
vulture sports 11:30 a.m.
Sha’Carri Richardson Gave Us Our First Big Olympic Moment, First Sob of the Day Sha’Carri is carrying Team USA, and she’s carrying them fast.
performances 11:25 a.m.
Chlöe x Nina Simone’s Encore Performance on GMA Has Us ‘Feeling Good’ Chlöe Bailey onscreen, you know how I feel.
trailer mix 11:12 a.m.
Meet Ted Lasso’s Angry Alter Ego, Led Tasso, in the Season Two Trailer And he will flip over all the sports drinks.
bird watching 11:11 a.m.
Tuca & Bertie Are Just As Anxious As You Are The best bird buds are back on Adult Swim and perfectly suited to our new neurotic normal.
own things 11:10 a.m.
10 Eye-Popping Deals on Animation DVD and Blu-ray Box Sets HD remasters and hours of special features make these Amazon Prime Day specials enticing.
streamliner 10:45 a.m.
Which Free Streaming Services Should You Be Using? How to tell apart your Pluto from your Xumo.
infotainment 10:35 a.m.
John Oliver’s Segment on PACE Is Basically The Big Short 2: Even Bigger Shorts Featuring a George Clooney cameo.
chat room 10:31 a.m.
Blindspotting’s Jasmine Cephas Jones on Holding It Together and Letting It Go “In brainstorming the show, there were a few moments that are, like, The Moment. This was one of them.”
them crooked vulture 10:22 a.m.
Foo Fighters, Dave Chappelle, and a Radiohead Cover Walk Into MSG … And 20,000 people lost their shit.
own things 10:01 a.m.
The 10 Best DVD Box Sets to Buy Right Now There are great deals on Sex and the City, James Bond, Jurassic World, and more today.
album review 9:00 a.m.
Doja Cat Refuses to Be Dragged Down to Earth Planet Her makes a case for Doja as our new ice-cool pop-queen supreme.
By Craig Jenkins
vulture picks 8:30 a.m.
25 Notable New Releases Over the Next Two Weeks Zola, Lana del Rey’s latest album, Central Park season two, and more.
the streaming wars 8:00 a.m.
The Hottest Streamer (Right Now) Who is winning the platform wars?
By Josef Adalian
first person 7:00 a.m.
Rachel Lindsay Has No Roses Left to Burn I thought I could change The Bachelor franchise from within. Until I realized I was their token.
By Rachel Lindsay
babies all the way down Yesterday at 11:10 p.m.
Nick Cannon One-ups Your Father’s Day With Fourth Baby in Less Than a Year Model Alyssa Scott posted a maternity photo of the pair to her Instagram Stories.
class of 2021 Yesterday at 9:22 p.m.
Age 1,000 Years Instantly As Olivia Rodrigo Celebrates High-School Graduation At least college life is way less emotionally fraught, right?
feeling good Yesterday at 8:01 p.m.
Nina Simone’s Granddaughter Defends Chloe Bailey’s Slinky ‘Feeling Good’ The singer performed as a part of ABC’s Together We Triumph Juneteenth special.
More Stories