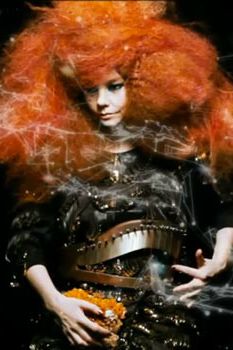 By now, you have surely read about — and perhaps become slightly confused by — the multimedia science extravaganza that is Björk’s Biophilia. The album, which took three years and the assistance of both Apple and National Geographic to create, will be officially released as a series of iPad apps; each song addresses a different biological or cosmological theme, with a corresponding interactive “experience” (games, animated scores, etc). In addition to inventing several instruments for the album, Björk reportedly spent months reading up on astrophysics and string theory to write the songs. This is all by way of saying that Biophilia has a lot of Björk-brand eccentricity going on, before you even get to the music itself.

Some of the tracks are harder to latch onto — “Hollow,” for example, lacks a chorus, repeated incantation, or even a consistent rhythm — and you can understand why Björk designed a visual companion for the album. Every planetarium in existence should be playing Biophilia with its shows; it’s haunting, expertly crafted space music. But there are also extremely accessible moments, like “Cosmogony,” a sweet ballad that swells with choir and horns (or whatever unusual instrument Bjork dreamed up to make that sound). It also offers three explanations for the origin of the universe: (1) a silver fox sang a song that became the world, (2) a god burst out of a dark black egg, and (3) the Big Bang (though her version is more poetic). Even the laws of physics succumb to strange whimsy in Björk’s world. Anyone who’s seen her explain a television could have told you that.

overnights 18 mins ago
Never Have I Ever Recap: Trollhunter It’s admirable of Never Have I Ever to navigate the gray areas of the Paxton/Devi/Haley dynamic.
departures 10:49 a.m.
Jon Batiste Leaving Late Show for His True Calling: Winning More Grammys Interim bandleader Louis Cato will take over fully.
overnights 10:23 a.m.
For All Mankind Season-Finale Recap: All My Good Dumplings Another big-swing finale does a nice job making some concluding remarks on what unites these precious (and in one case, literal) space babies.
overnights 9:50 a.m.
Never Have I Ever Season-Premiere Recap: The Odd Couple The gossip and pressure of being the school’s hottest and unlikeliest couple get to Devi.
overnights 9:45 a.m.
A League of Their Own Series-Premiere Recap: Play Ball Batter up! Hear that call! The time has come for one and all…
collabs 9:13 a.m.
Beyoncé Is the Girl to Make Ronald Isley & the Isley Brothers Say It Again Listen to their new duet of the 1975 hit “Make Me Say It Again, Girl.”
movie review 9:00 a.m.
Emily the Criminal Isn’t Interested in Empathy Aubrey Plaza is great as a woman caught between crushing loans and a felony record who embarks on a surprisingly gritty criminal side hustle.
By Alison Willmore
role call 8:46 a.m.
Kate Bosworth Answers Every Question We Have About Blue Crush On competing for the lead role with Jessica Biel, eating sand during her audition, and surviving the “cruel” streak of the early 2000s.
By Ilana Kaplan
qu'est-ce que c'est? 8:00 a.m.
When Wet Leg Met Wet Leg Superfan David Byrne The breakout indie-rock duo and former Talking Heads frontman discuss the perils of fame, the genius of “Psycho Killer,” and being specks of dust.
the grub street diet 6:00 a.m.
L Morgan Lee Searches for the Joy in Dinner “I had my first bite and felt my spirit start to stir.”
By Zach Schiffman
last night on late night 12:59 a.m.
Watch Megan Thee Stallion Write Some Thank-You Notes With Jimmy Fallon As part of her guest hosting gig on The Tonight Show.
my single is dropping 12:21 a.m.
Nicki Minaj’s New TikTok-Fave Single, ‘Super Freaky Girl,’ Is Out She’s all right.
new music friday 12:01 a.m.
Megan Thee Stallion Drops Traumazine Early As a ‘Plan B’ No complaints here.
accidents Yesterday at 11:48 p.m.
Anne Heche Is Not Expected to Survive After Car-Crash Brain Injury She is currently being kept on life support to determine if her organs are viable for donation.
overnights Yesterday at 10:40 p.m.
Pretty Little Liars: Original Sin Recap: Leave It All on the Floor The girls are having confabs, chasing down bonkers leads, and kissing crushes in Original Sin’s strongest episode to date.
tweet then delete Yesterday at 9:34 p.m.
Michelle Branch Announces Her Separation From Black Keys’ Patrick Carney “The rug has been completely pulled from underneath me and now I must figure out how to move forward,” said Branch.
overnights Yesterday at 9:00 p.m.
Southern Charm Recap: Puppy Love Austen is sad because his own antics have caught up with him.
overnights Yesterday at 9:00 p.m.
Rap Sh!t Recap: Catching Flights, Not Feelings The triumphant NYC trip doesn’t go as planned.
accidents Yesterday at 8:05 p.m.
Anne Heche in a Coma, Under DUI Investigation, Following Car Crash According to a representative, she has remained in a coma since shortly after the accident.
we bought a zoo Yesterday at 6:53 p.m.
Would You Still Love Jessica Chastain If She Were a Worm? Oscar Isaac compared his and Chastain’s chemistry to flatworm cells, obviously.
More Stories