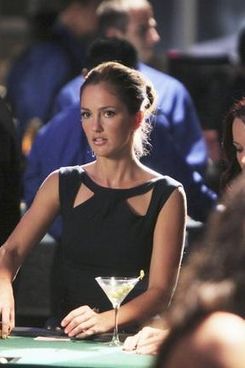 Things are not looking good for new Thursday night series Charlie’s Angels or How to Be a Gentleman. Last night’s episode of ABC’s rebooted Angels attracted just 5.9 million viewers and earned a 1.2 rating in the under 50 demo, dropping for the third week in a row. Last fall ABC pulled the plug on My Generation after its second episode earned a 1.1 demo rating; it seems almost certain the Alphabet will pull Angels from its schedule, and soon. Meanwhile, Gentleman did better on CBS, at least in terms of raw numbers: Its second episode drew nearly 8 million viewers and averaged a 2.5 demo rating. However, lead-in The Big Bang Theory attracted almost 14 million viewers, and CBS doesn’t really need to be patient on such an important night. The network delayed this Saturday’s planned premiere of Rules of Engagement for a reason: Most industry insiders expect Rules will replace Gentleman, perhaps as soon as next week. Elsewhere in the ratings, the weak performance of Gentleman hurt CBS’s 9 p.m. newbie Person of Interest, which dropped in the ratings once more. But while all of NBC’s comedies were down versus last week, Prime Suspect held steady at 10 p.m. Unfortunately, steady means under 5 million viewers and third in the time slot.

tv ratings 13 mins ago
The Rings of Power Ratings Are in, and They’re Good Nielsen weighs in on the Lord of the Rings versus Game of Thrones battle.
glee-ality 4:14 p.m.
How Does Lea Michele’s Funny Girl Review Compare to Rachel Berry’s? Ryan Murphy, you can’t keep getting away with this.
overnights 3:44 p.m.
Survivor Recap: Beware the Beads Cody pulls off an impressive move that flips the Vesi power dynamics.
overnights 3:32 p.m.
She-Hulk: Attorney at Law Recap: Hurtin’ for a Yurtin’ A bunch of Z-list supervillains give Jen the therapy breakthrough she needs.
oscar futures 3:00 p.m.
Welcome to the First Oscars of the Post-Slap Era Wake up. It’s awards season again.
By Nate Jones
oscar futures 3:00 p.m.
The New Rules of Oscars Season As we stand on the precipice of another awards season, here are four crucial lessons to remember about the way the Academy works now.
vulture lists 3:00 p.m.
The 35 Best Movies Over 3 Hours Long Got some extra time? Lose yourself in these cinematic spectacles.
overnights 2:49 p.m.
The Good Fight Recap: True Believer Diane wants Eli to fight the titular good fight — whatever it takes.
respect the classics 2:33 p.m.
Phil Collins and Genesis Now Have a Very Visible $300 Million Touch They sold their rights, and hope to “bring some of this music back to life.”
oscar futures 2:00 p.m.
Are You Ready for This Year’s Incredibly Messy Best Actor Race? In The Whale and The Son, two of the strongest Best Actor contenders come from films a chunk of the critical community absolutely loathed.
By Nate Jones
all in the band 1:24 p.m.
Paramore Aren’t Just Back, They’re Dating Well, Hayley Williams and Taylor York are, anyway.
into it 1:00 p.m.
Guy Branum Loves That Bros Made Room for a Happy-Sack Gay But he’s more mixed on the discourse: “You cannot change the problems of millennia of marginalization without things being a bit weird around it.”
"try everything" -shakira 12:53 p.m.
Bye, Guy Ned Fulmer, one of four Try Guys, is “working” on his marriage after his “consensual workplace” affair went viral.
overnights 12:44 p.m.
The Kardashians Recap: When It Brains, It Pours Khloe gets a brain scan (for fun!), while Kim and Kendall take Milan.
books 12:24 p.m.
The Best Sex That Less Author Andrew Sean Greer Has Ever Read “Instead of thinking, How will I describe a penis?, you think, What else is sex? What else will bring it alive to people?”
chat room 12:15 p.m.
Luke Macfarlane Listened to Las Culturistas to Prepare for Bros “Especially during the pandemic, they were like my friends that I would check in with and hear their opinions.”
coming soon 12:14 p.m.
Bones and All Trailer: Taste Freedom of the Open Road (and Fresh Corpses) Taylor Russell and Timothée Chalamet slay in the gory cannibal romance.
vulture festival 2022 12:05 p.m.
See Vulture Festival’s First Lineup Right Meow All Creatures Great and Small joins We’re Here, Sheryl Lee Ralph, Henry Winkler, and Super Troopers for an old-fashioned L.A. pool party.
vulture 10x10 12:02 p.m.
The Mosquito Puzzle 23-Across, Three Letters: M. Night Shyamalan beach movie.
it's hard out here for an ally 11:59 a.m.
Did Netflix Really Put an LGBTQ Tag on Dahmer? “Dahmer and Heartstopper is a great double feature” — Netflix, probably.
More Stories