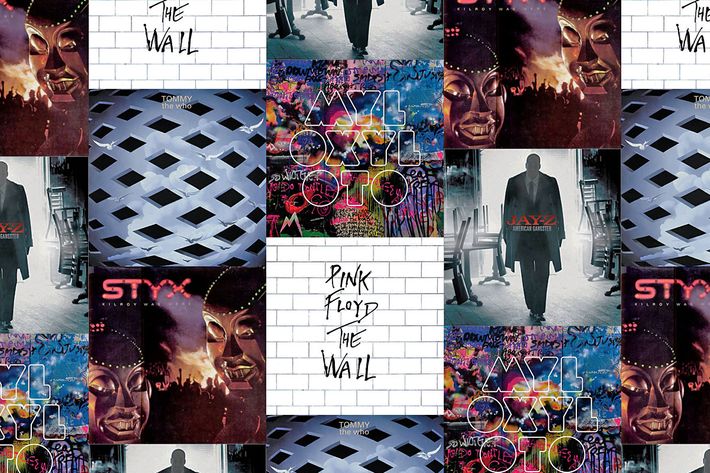 Coldplay’s Mylo Xyloto, out this week, is the latest in a long, sometimes ill-advised, but always ambitious musical tradition known as the concept album. (Mylo’s specific concept is still a little murky, but we know it involves princesses and xylophones.) Chris Martin and friends are not the only band attempting the rock opera: The Roots recently announced plans for their own narrative effort as well. Plots are all the rage, apparently, but how will these new stories compare with the classic rock operas of yore? And are there, perhaps, some common themes to the concept album? To help put these new attempts into broader historical context, Vulture spent many hours weeping to tragic rock operas in order to provide you with a digestible, story-based guide to the nine types of concept albums. Are you in the mood for an unlikely messiah, a magical adventure with a vegetable boy, or a dystopian world in which rock is the answer (it always is)? Pick your protagonist, and enjoy.

… in which music is outlawed, and a disillusioned guitarist descends into a journey of Scientology knockoffs, wet T-shirt contests, and prison: Frank Zappa, Joe’s Garage.

Vulture’s Handy Guide to the Nine Types of Concept Albums

coming soon 8 mins ago
Strangers, Andrew Scott’s New Movie With Paul Mescal, Sounds Hot Mescal’s character will “puncture the rhythm” of Scott’s “everyday life.”
let's go grandmas 5:10 p.m.
Miles Teller Should Be the Next James Bond, Says Miles Teller’s Grandma “Miles is very proud of his genetic connection to the British Isles.”
timelines 4:47 p.m.
The Complete History of Ezra Miller’s Controversial Career The woman Miller appeared to choke in a 2020 video from Iceland recounts the incident.
good one podcast 4:19 p.m.
Cristela Alonzo Needed a Decade to Process Greg Giraldo’s Advice  “You don’t have to listen to everybody’s notes, but if you respect them … maybe listen and see if it works with what you’re doing.”
no rest for the tickets 4:00 p.m.
New York Is Finally Making Ticket Prices More Transparent A bill that bans hidden fees and requires resellers to show original prices has been signed into law.
the classics got no respect today 3:35 p.m.
Glenn Frey Would Not Approve of This Nonsense A brawl broke out among VIP guests at an Eagles concert, during “Take It Easy.”
in a material world 3:20 p.m.
An Immaculate Collection of Details About Madonna’s Self-Written Biopic Starring Julia Garner as Madame X herself.
the industry 3:02 p.m.
Randall Emmett, Producer and Vanderpump Rules Ex, Faces Abuse, Fraud Allegations The king of the “geezer teasers” allegedly mistreated business partners, employees, and women (including ex-fiancé Lala Kent).
bpe 2:29 p.m.
The Songs of Girls5eva, Ranked They’re gonna be famous 5eva, but which song is No. 1?
knock knock 2:00 p.m.
31 Comedians Share Their Favorite Joke-Joke From puns to chickens crossing the road to giving Willie Nelson a blowjob.
By Jesse David Fox and Jason P. Frank
rip 1:44 p.m.
Sonny Barger, Hells Angel Turned Sons of Anarchy Guest Star, Dead at 83 He died of cancer according to a Facebook post.
funny videos of the month 1:30 p.m.
The Best Comedy Shorts of June 2022 Rounding up our favorite funny videos of the month.
By Luke Kelly-Clyne and Graham Techler
b7 1:25 p.m.
Everything the Beyhive Knows About Beyoncé’s Renaissance Time to overanalyze the album art.
scams 1:10 p.m.
Chloe Fineman Might’ve Gotten Got by Anna Delvey The SNL star is still waiting for a sketch she paid for, knowing everything we know.
theater review 12:58 p.m.
A Hamlet That May Have Been Nobler in the West End Robert Icke’s production lost something on its way across the Atlantic.
vulture 10x10 12:00 p.m.
The Choreography Puzzle 10-Across, Five Letters: Cake Boss goop.
life in blood red 11:05 a.m.
MGK ‘Clinked’ a Champagne Glass on His Head Because ‘There Were No Forks’ The “I Think I’m OKAY” singer thinks he’s going to be OKAY.
trailer mix 10:00 a.m.
Everything’s Trash but Phoebe Robinson’s New Show Looks Great “There’s no condom for your heart,” so you may catch feelings.
box office 8:00 a.m.
Top Gun: Maverick Has One More Record to Break It’s coming for the big boat movie.
last night on late night 12:20 a.m.
Watch the Cast of Thor: Love and Thunder Get All Gallagher With Mjölnir Thor smash!
More Stories