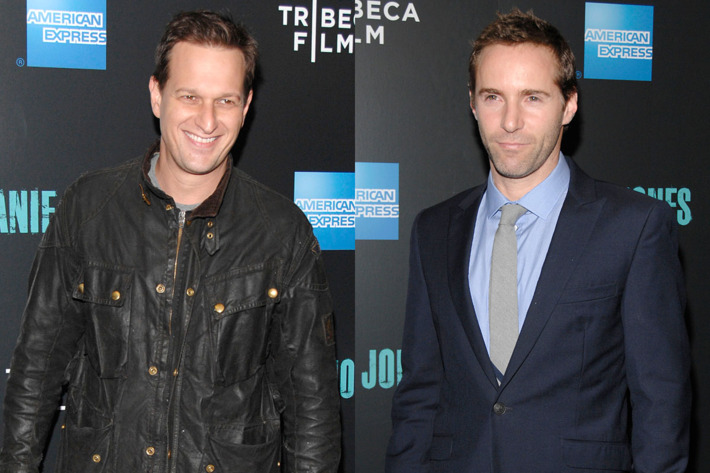 Superstition would dictate that it’s not the best idea to step into a packed elevator and joke, “This is overloaded. We might die tonight,” particularly four days before Halloween. Of course, no one ever believes said elevator will then plummet four stories and get stuck. Until  it does. Which is exactly what happened to a merry band of revelers, including Josh Charles and Alessandro Nivola, exiting last night’s premiere party of Tribeca Films Janie Jones, which was hosted by American Express on the sixteenth-floor rooftop terrace of the Gramercy Park Hotel.

They all fled to Knickerbocker for some much-needed drinks. This morning, Gramercy manager Elizabeth Mao sent Vulture the following statement: “Yes, last night, there was an elevator malfunction as guests departed from an event at the Gramercy Terrace. Our security team responded to the incident immediately and within minutes had alerted both he New York Fire Department and the elevator company. All guests were safely evacuated. As the safety of our guests is always a paramount concern, we are ensuring the elevator car in question undergoes a thorough inspection by our maintenance provider, as well as the New York Fire Department, before placing it back in service. We anticipate the elevator car will be fully operational by this afternoon.” But last night at Knickerbocker, Josh Charles, laughing finally as he enthusiastically relived the experience, said, “Here’s my quote: If anyone stays at the Gramercy, take out insurance before you ride the elevator. If you go to the Gramercy, try not to die. Use the stairs.”

vulture sports 1:32 a.m.
UFC President ‘A Day or Two Away’ From Getting a Private Island to Hold Fights Unless they can somehow kick each other’s ass from six feet away, this seems like a non-starter.
umg fire 12:24 a.m.
Judge Dismisses Lawsuit Over 2008 Universal Music Group Vault Fire A group of musicians, including Soundgarden, Hole, Steve Earle and Tom Petty, sued UMG last year over destroyed recordings.
disney Yesterday at 10:16 p.m.
Look, Disney Made Your Kids This At Home With Olaf Shorts Series From Home If you currently want to take your head off and hurl it like a snowball, Olaf completely understands.
overnights Yesterday at 10:15 p.m.
Better Call Saul Recap: Game Theory Jimmy’s definitely in the game now — and he’s bringing Kim with him.
overnights Yesterday at 10:01 p.m.
The Plot Against America Recap: The Great Undertaking As the nation turns and people change into different versions of themselves, all the strife trickles into Philip’s mind like a leaky faucet.
obits Yesterday at 9:34 p.m.
Honor Blackman, Star of Goldfinger and The Avengers, Dead at 94 Blackman famously left The Avengers to play Pussy Galore across from Sean Connery’s James Bond.
vulture lists Yesterday at 7:06 p.m.
The 79 Best Pandemic Movies to Binge in Quarantine Zombies. Parasites. Contagion. Oh my.
By Jordan Crucchiola and Bilge Ebiri
now streaming Yesterday at 7:00 p.m.
The 30 Best Comedies on Hulu Right Now Booksmart, Heathers, Jackass 3, and more.
vulture lists Yesterday at 6:32 p.m.
Even More Things to Stream While Broadway Is Shut Down Did you know that the SpongeBob musical is on Amazon Prime?
quarantine content Yesterday at 6:26 p.m.
Reese Witherspoon’s Southern Accent Jumps Out While Talking Cars With Offset Is Offset going to buy a car from Reese’s dad now?
roll clip! Yesterday at 6:05 p.m.
Ellen Returns, Is the Latest Talk Show Host to Let Us Critique Her Living Room “Thanks for not being here.”
remembrances Yesterday at 5:49 p.m.
Remembering Bill Withers’s Singular Voice Bill Withers was a straight shooter as a singer, sort of like a church pastor in the sense that really, he was just talking to you.
By Craig Jenkins
quibi Yesterday at 4:57 p.m.
Quibi Is for Mobile Streaming and Mobile Streaming Only Now that the short-form streaming app is here, users are discovering just how serious Quibi is about watching its shows on a phone — and nowhere else.
quarantuning Yesterday at 4:30 p.m.
Watch These Livestreamed Concerts During Your Social Distancing DJ D-Nice, Miley Cyrus, Ben Gibbard and a lot of Diplo.
By Justin Curto
hey all you cool cats Yesterday at 4:15 p.m.
Joe Exotic Will Attempt to Explain Himself in New Special Investigating the Strange World of Joe Exotic is coming to ID.
coronavirus Yesterday at 4:15 p.m.
Escape Our Current Hell With These (Good) Coronavirus Jokes They say laughter is the best medicine.
quarantine content Yesterday at 3:36 p.m.
All Rise to Film an Episode Entirely on Devices Have you seen the movie Searching? It’s like that.
vulture lists Yesterday at 3:30 p.m.
Every Bon Appétit: Gourmet Makes Video, Ranked The web series has turned into prestige television, full of drama, surprises, and rich character arcs.
quarantuning Yesterday at 3:18 p.m.
Charli XCX, DIY Queen, Will Make and Release a Full Album in Quarantine Call it her King Lear.
the jokes must go on Yesterday at 2:30 p.m.
Fallon, Colbert, and Kimmel Are Teaming Up for a Star-studded COVID-19 Special And Lady Gaga has curated a long list of musical guests.
More Stories