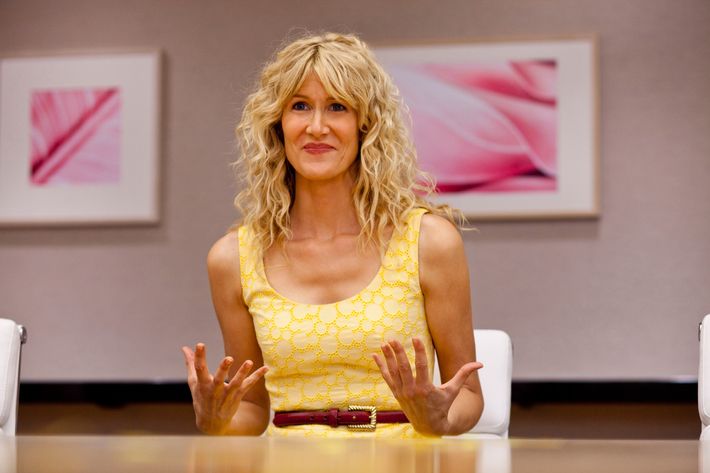 When Enlightened opens, we find 40-year-old Amy Jellicoe (Laura Dern) inside a seafoam green office bathroom stall, bawling her eyes out. It’s unsettling, and that’s the reaction the co-creators, Dern and Mike White, were going for. In the space of a couple of seconds, Dern, one of the more expressive faces in cinema, works through nearly every variety of cry, from full-body sob, to silent hiccuping hyperventilation, to something guttural and exhausted that could be mistaken for laughter if you weren’t looking at her face.

Amy silences herself only to listen to two co-workers, who have entered the bathroom and immediately begun making fun of her. This is a great opportunity to talk about when this actually happens in real life: never. Anyway, the women’s commentary is as nasty as Amy’s sadness is total: They snigger, saying things like, “The department is better off without her” and “Buh-bye, don’t let the door hit you on the way out,” and also reveal the reason for Amy’s predicament: She has unexpectedly been moved to another department, and rumor has it that an affair with her boss, Damon (Charles Esten, who is great at being a disaffected ass), had something to do with it.

Some experts say venting doesn’t actually work, but it’s pretty entertaining! Actually, in this case, it’s horrifying and then satisfying. When Kate Bosworth’s character confronts catty gossips in the bathroom in Blue Crush — the only example of a bathroom showdown that comes to mind right now — she gave them her shoes, then submerged herself in the waters of an artificial beach and whined about how she didn’t know what she wanted out of life. Laura Dern’s Amy instead tells her co-workers exactly what she thinks of them, shoves two more unwitting co-workers in the hallway, and tears across the office in a mascara-smeared rage in search of Damon. Both are “abnormal” responses to the same thing, but Dern’s is more so, and she’s said in interviews that part of the show’s aim is to explore rage and how rage might be turned into something good.

Just not yet. As Amy moves through the office, the camera takes on the expected role of her head, wobbling determinedly along, receiving plenty of uncomfortable and uncertain stares, and getting chased after by Amy’s assistant Krista (Sarah Burns), who informs Amy (in a whisper, since she doesn’t really want to be assisting Amy in any of this), “You look insane,” her eyes darting from side to side. Thanks to that comment, Krista also gets some of Amy’s wrath. Amy tells her to go back to her “sad fucking little desk,” and so on. Amy finally encounters Damon at the elevators, where she tries to shame him in front of a pair of important-looking suits, but none of the men looks all that shaken by Amy’s nuisance of a nervous breakdown until she tries to pry the fully shut elevator door open — and succeeds.

This breakdown is one HBO has described as a “nervous breakthrough”: Immediately after the elevator-door-head-sandwich moment, in which Amy also threatens to kill Damon, we find her at a treatment center in Hawaii, swimming with sea turtles, meditating in the ocean breeze, sitting around a campfire with fellow residents, writing in a journal while watching a sunset, and generally looking and sounding very Elizabeth Gilbert–y. During this slow and eerily peaceful scene set to the kind of piano composition that signals a really epic but hopeful struggle, Amy recites some of the insights learned during this sojourn: “I’m speaking with my true voice now,” she says, “without bitterness or fear. And I’m here to tell you, you can walk out of hell and into the light. You can wake up to your higher self, and when you do, the world is suddenly full of possibility, of wonder and deep connection. You can be patient, and you can be kind. You can be wise and almost whole … You can change. And you can be an agent of change.”

This isn’t supposed to be funny, though it’s the kind of thing people would probably laugh at in a movie theater, partly because Amy sounds like she’s coaching a woman through childbirth. Amy makes post-rehab life sound nothing short of Sisyphean, and sure enough, it’s a matter of seconds before the permanent sunset glow and slow-motion tree-swaying of Hawaii gives way to the traffic jams (and similar permanent sunset glow, as it turns out) of Los Angeles. She wants to do what? Be patient and kind? And wise and almost whole? To be an “agent of change” is probably the hardest task of all, but Amy is determined to go after all of it. Inner perfection does have its appeals. She auditions as an agent of change once back at work, and also plays the part with her ex-husband Levi (Luke Wilson!!), whose personal “hell,” for the time being, is everyday life, and whose “light” is cocaine.

At the end of the episode, Amy is marching into the very same office on her first day back, in a pretty yellow dress, having secured a new job title. She looks like she’s already arrived at the end of a series, or a movie, but the reality is she still has a long way to go, and why not, humans being humans? The fact is, she procured her new position by calmly threatening HR with a lawsuit. She presented Levi with a self-help book complete with Papyrus font usage only to find him, moments later, doing lines of coke while she’s dreamily marveling at what a good place they’re finally in. She’s living with her brusque mother (played by Diane Ladd, Dern’s actual mother), who prefers her daughter skip the holistic mumbo-jumbo and just stick to her prescriptions. Generally, Amy is handling most situations with more panache and zeal and adrenaline than is socially acceptable.

So the world is the thing getting in the way of Amy’s progress. It’s only when she’s faced with others’ bad reactions to her good (if overbearing) intentions that she stumbles. Once back in L.A., she leaves a second voice mail for the unresponsive Damon, looking for closure, then decides to just park in front of his house that very night so they can discuss the matter in person. This feels like a rom-com trick designed to amuse and speed things up, but it’s also to show that Amy is so pumped up on good intentions that she can’t imagine doing things at a regular pace (and presumably never has). Damon is so infuriated by this gesture that Amy ends up losing her cool, too. It doesn’t help that Damon, hovering above Amy as she sits in her car, his eyes and veins popping, calls her — not just his affair with her, but her entire person — a “mistake.” In her haste to get away, she rear-ends his BMW twice.

But this, the bumper of Damon’s car falling to the ground, yields a tiny breakthrough: Damon and Amy stand silently, facing each other across his lawn, he covering his entire face with his hand and then looking at her for a split second with something resembling humanity, and she asking if he wants her insurance information. Amy can do all the things Hawaii taught her. That’s all we know for sure.