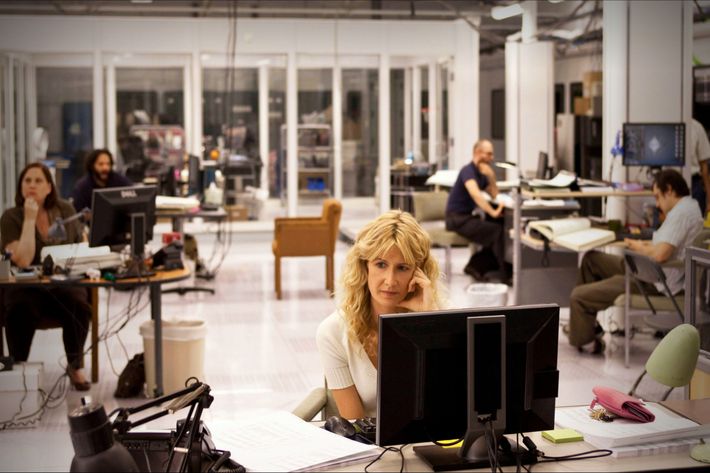 It was certainly sly about it, but this week eventually became the best episode of Enlightened so far. The way things were going, I wasn’t expecting we’d get a searing examination of working (or non-working) life in contemporary America, a depressing look at what we often have to do to stay above water, how normal we have to try to seem, how isolating work can be, how lonely we have to pretend we’re not. Corporate life, yes, that’s been covered here. Unfulfilling work, too. But this week went deeper than that. To put it another way, maybe Amy was on her way to being one of the one percent, but she’s now firmly in the 99 camp, and not just because she was forced to be.

Things do start off, as before, at a seeping pace, with another voice-over from Amy that moves so soothingly and metronomically that we can only assume we’re being let in on a new morning, pre-descent-into-Abaddonn meditation ritual. But this time, Amy isn’t giving us an uplifting mantra or bright-eyed plans for the future, as in the previous two weeks. Instead, she’s saying something dark and honest: Sometimes, “late at night,” she begins, “visited by dread and shame, I lie in bed and think of somebody else’s life.” We join Amy as she travels in her imagination through her former assistant Krista’s life. The camera plays along, showing Amy watching as Krista shares a lighthearted conversation with her husband while cooking dinner; showing Amy standing in their bedroom in her PJs while Krista and her husband have sex; Amy watching as Krista opens gifts at her baby shower, surrounded by loving family and friends; and so on. “I imagine the love that they’re getting,” Amy continues, “and the relief that comes from being really known, the private pleasures they share, the friends they have, and the pressures they don’t. Their sense of importance, the satisfaction of their work … “

What stands out here is how protected, how padded Krista is by other people in Amy’s imagination and how alone Amy is. And she is! (This is familiar: What would be refreshing is to see a lead character on a cable drama actually have friends.) But there is something almost sickening about how Amy portrays Krista’s life. Sickening because it’s believable. It is believable that Amy is unable to see that other people’s lives contain monotony, criticism, rejection, maybe even a nervous breakdown of their own. At our very lowest, we’re not always putting people down, but puffing them up.

This week, Amy walks into the Cogentiva office with a fresh, giant coffee stain on her white shirt. She still thinks she’s vastly overqualified to be on Floor H entering data about employee performance with other Abaddonn misfits, who presumably settle for this line of administrative work because they need the money and think that eventually they’ll get their due. But Amy’s (at times crazed) arrogance gets whittled down this week. She’s not getting out of this holding pen yet, so she’ll have to make the most of the predicament and potential human connections therein. As a bonus, while she’s down on H, not doing very much work, she’s getting ample time to think. And to apply to other jobs.

Because Amy has to, we spend a considerable amount of time with her sallow Cogentiva co-workers and her ridiculous boss Dougie, who in the tradition of tyrannical fictional bosses, does no actual work, just yells at his charges periodically and bounces a tiny basketball against the glass wall of his all-seeing office. Suddenly, none of the other sad sacks seems as bad off as Amy with her hideous coffee stain. Having basically thrown the coffee on herself while still at her mother’s kitchen table, it is pretty odd that Amy didn’t change her shirt before coming to work! Are we being reminded of how flighty and/or reckless Amy is? Is the coffee stain a middle finger to Dougie and everyone else at sub-Abaddonn? Is it a badge of honor of the sort that all the hopeless Cogentiva workers wear? All of it.

As the episode begins, Amy is still only fleetingly interested in the people of Cogentiva, who, this week, are tearing each other down (quite literally) over the origins of a cold spreading around the office. At one point Amy takes off to go interview for a position at a homeless shelter (more on that in a minute). She comes back into the office two hours later with her shirt half-untucked, and, taken with the coffee stain, these signs of outward disarray add up to something more, and something disappointing, to Dougie. It’s almost as if Amy is expected to be more together than everyone else, perhaps because she’s new, perhaps because she’s “tall and blonde and lovely,” as Dougie announced on her first day on the job in a freakish attempt at a compliment. After fielding calls from the homeless shelter while Amy is out at lunch one day, Dougie begins to wonder if Amy is homeless herself, and then, dolt that he is, finds himself stumbling after outright asking her. He poses the question like an accusation. “What if I were?” Amy responds. “Uh … that would be sad,” he manages. “Yeah, well,” she says, and that’s the end of that. She walks out of his weird glass cube, and she’s off the hook, and has made him feel genuinely remorseful, probably for the first time in a long time.

But what makes this more gratifying is the way Amy handles the situation at the homeless shelter in the previous scene. For once (or thereabouts), there is no patina of humor or strangeness over this scene. Amy tours the shelter, gets a hug from a schizophrenic woman staying at the shelter, and is prepared to accept the position until she learns how little it pays. This feels like the moment Enlightened shook its newbie status and became a good show. Because as disappointing as it is that 40-year-old Amy won’t accept $500 a week to do the fulfilling nonprofit work she wants to do, it’s also understandable. Amy starts to cry in front of the head of the shelter over her decision to continue with corporate Abaddonn in the hopes that she won’t always have to live with her mother (she also gets a $24,000 bill from the treatment center in this episode, so this isn’t just about pride). Before, I felt as diffident about Amy as Amy feels about her Cogentiva gang. But now I’m invested. And so is Amy: At the end of the episode, she ditches a white-flag-waving Krista at lunch because she’s already said she’d have lunch with Tyler. If this is all meant to tug at our heartstrings, well, I think it worked.

Enlightened Recap: The Haves and Have-Nots

coming soon 17 mins ago
Abbott Elementary Is Back in Session on September 21 And running through the whole school year with a full 22-episode season.
buzz! buzz! 3:37 p.m.
Who Manifested Simone Kessell As Adult Lottie in Yellowjackets? Looks like Courtney Eaton is now a series regular.
sweet! 3:04 p.m.
Ellie Kemper and Zach Cherry to Co-host The Great American Baking Show The Bake Off spinoff premieres in 2023.
overnights 3:02 p.m.
Love Island Season-Finale Recap: Ti Amo Somehow Luca and his ability to generate indignant fury out of thin air made it to the finale.
merrily we cast along 2:08 p.m.
Jonathan Groff and Lindsay Mendez Join Daniel Radcliffe in Merrily We Roll Along We hope the priest from Lady Bird will be happier with this production.
1:30 p.m.
‘Foo’ or ‘Fool’? A Chat With the Cast of This Fool  A generational divide, explained.
christmas in august 1:27 p.m.
Darlene Love and Mariah Carey Are Battling for the Christmas Throne And so is Christmas-exclusive singer Elizabeth Chan.
overnights 12:53 p.m.
Reservation Dogs Recap: Hard Times Being physically present is not the same as “being there” for someone.
trailer mix 12:36 p.m.
Wednesday Teaser: The Addams Family Has Scholastic Problems and Spooky Solutions Jenna Ortega stars as the titular piranha-wielding teen.
read on 12:30 p.m.
Salman Rushdie Book Sales Soar Following Attack The Satanic Verses author has reentered best-seller lists while recovering.
american crisis 12:11 p.m.
Andrew Cuomo Can Keep $5 Million for COVID-19 Book, Judge Rules After an ethics panel previously said he had to give it up for reported improper use of state resources.
it's a re-sabotage 12:00 p.m.
Netflix Is Reviving Competition Classic The Mole This Fall As long as no saboteurs get in the way.
vulture 10x10 12:00 p.m.
The Green Puzzle 5-Down, Five Letters: Actress John Travolta once called “Adele.”
the guys are fighting 11:45 a.m.
Kid Cudi Says Reuniting With Kanye West Would Take a ‘Miracle’ “I don’t see it happening. He gon’ have to become a monk.”
tributes 11:10 a.m.
Foo Fighters’ Taylor Hawkins Tribute Concert to Stream on Paramount+ The lineup now includes the Foo Fighters, Travis Barker, and Hawkins’s son, Shane.
role play 10:55 a.m.
Hassan Johnson Is Television’s Funniest Gangster From Wee-Bey on The Wire to Drew on Flatbush Misdemeanors, the actor has mastered playing terrifying characters who get laughs.
the law 10:15 a.m.
Timbaland and Swizz Beatz Sue Triller for $28 Million in Missed Verzuz Payments The musicians sold their live series to the TikTok competitor last year.
first person 8:00 a.m.
The Voice of New York Is Drill  It’s the most captivating sound the city has heard in decades — and also the most misunderstood. Here, 19 NY drill artists set the record straight.
By Camille Squires
guides 8:00 a.m.
The Drill Songs to Know A mini genre primer.
the law 8:00 a.m.
What Happens When Drill and the Justice System Clash in the Courtroom? Lawyers and lawmakers share their experiences.
More Stories