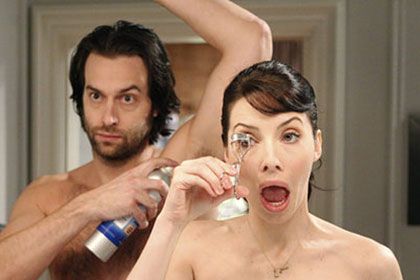 Not every bad show is irredeemable, and freshman shows in particular still have plenty of options for how to turn themselves around — just ask Parks and Recreation, which flailed for a little while before finding its voice. Whitney may not be your cup of lewd, grating tea, but there’s a better sitcom buried in there, just begging to be unearthed. Terra Nova has an audacious setting, and yet it’s surprisingly boring. X Factor just can’t find its footing, and 2 Broke Girls is still blindly searching for the source of its humor. Fear not, struggling shows! Step inside Dr. Vulture’s office and learn what’s wrong with you — and how to fix it.

The problem: Sourness. The main characters on this show aren’t just mean — they also seem lonely, which is a big problem for a show about a couple. The fix: Finding a sliver of a beating heart. Believe it or not, Whitney is getting better. The first episodes were overwhelmed by how much Whitney and her boyfriend Alex seemed to openly hate each other. Isn’t having sex the worst? Don’t you hate it when you never want to have sex and also you and your boyfriend have nothing in common and you’re super cruel to each other all the time? Amirite, ladies? Luckily, the show’s finding ways to show us why these characters care about each other or why their shared history is valuable to them, and giving them chances to be on the same team.
The problem: It’s a stagier, more phony American Idol. The fix: Be bold. The most daring thing a reality show could do these days is be real. What if the judges got serious about giving candid advice? What if the episodes were edited to move along instead of rehash the same segments over and over? What if the contestants weren’t coached to all echo the same dumb lines about their “dreams”? What if Nicole Scherzinger were roused from her coma? What if L.A. Reid dropped some of the platitudes? What if Simon stopped all that fakey fake-out “I’m not doing this!” nonsense and just gave actual feedback? What if Paula were present? What if instead of manufacturing phony interest with editing tricks, The X Factor used its contestants’ talent and drive and shortcomings to tell a story about human ambition and folly, and the glory of talent? Well, we can dream.
The problem: The star of the show is its least interesting character. Rachel Bilson’s Dr. Zoe Hart might be very adorable, but so far she’s also pretty dull. The fix: Connect the various story lines to one another. Meredith Grey might not be the most electrifying character on Grey’s Anatomy, but she’s a great central character because the stories all lead back to her. Dixie needs to put Zoe in the middle of the action, but add some action beyond the fact that she’s a fish out of water, y’all. There are all these other people in her town, like that guy, and that lady, and Jason Street, and another lady. They all know each other, and yet their individual story lines don’t have any broad effects. The perk of setting a show within a small community is that events can and ought to have a wide reach.
The problem: Everything is insane! The show is weird and twisted on every front. The fix: Let one thing be or seem normal. If any one aspect of the show seemed like it occurred as part of the real world, the series could be that much scarier and affecting. Plus, it could build up a rich, Hitchcock-style suspense that relies on a semblance of normalcy and then subverts that expectation. Right now, Horror’s everything-and-the-blood-filled-kitchen-sink storytelling teeters into overload.
The problem: Terra Nova is somehow squandering the most bananas setting in ages — humanity goes back millions of years to form a new colony during dino-times — by focusing on clichéd teen romances and unrelated subplots. The fix: Be about something. Anything. We beg you. It’s time to dig deep and find an emotional center, Terra Nova. Do the dinosaurs represent anything? Is this show an allegory? What parts of humanity might we be able to explore in this specific context that we couldn’t see in a more generic family-moves-to-a-new-town context? Answering or even beginning to answer any of these questions could give Terra Nova something interesting to go with all its special effects.
The problem: Tim Allen The fix: Nancy Travis There’s something very unsympathetic about Tim Allen’s portrayal of how difficult it is to be a straight, white, able-bodied, home-owning rich guy. Somehow, though, Nancy Travis brings a comic energy to her role as Allen’s long-suffering wife that seems sort of knowing and gentle. Standing could stand to back off its commitment to Allen’s myopic, dated views and give its other characters some human dignity. Photo: Randy Holmes/? 2011 American Broadcasting Companies, Inc. All rights reserved.
The problem: The show’s doing well ratings-wise, but its characters’ cruelty and the show’s casual racism undermine a lot of the humor. The fix: Learn to love each other, just a little. The best part of Girls is the chemistry between the two leads, Kat Dennings and Beth Behr. But the show seems to think its biggest assets are Max’s relentless zingers, and while salty-waitress, Flo-style misanthropy definitely has a place in comedy, Girls doesn’t have enough other stories going on to make Max’s nastiness seem funny. It just seems, well, nasty. What makes an odd couple odd isn’t that they hate each other — it’s that they love each other. Girls needs to find more of a Sam-and-Diane connection between Max and Caroline and less of a Carla-and-Diane connection. Photo: RICHARD CARTWRIGHT/?2011 CBS BROADCASTING, INC. All Rights Reserved.

How to Fix Seven Shows That Are Struggling Creatively

sundance 2023 37744 seconds ago
A Complete List of Films Sold at Sundance 2023 (and Their Price Tags) MTV Documentary Films picked up The Eternal Memory.
new music friday 12:04 p.m.
Just Who Did Rita Ora Get for Her New Music Video? And why did they say yes to this?
vulture 10x10 12:00 p.m.
The In-Laws Puzzle 4-Down, Five Letters: Movie starring a 13-year-old Kristen Stewart.
overnights 12:00 p.m.
Shrinking Recap: Everything Goes My Way Shrinking’s ensemble gets more time to shine.
infected 12:00 p.m.
The Last of Us Spawns a Second Season (of Pedro Pascal) HBO saw our thirst and gave the people what they want.
the jlowicc 11:21 a.m.
An Attempt to Make Sense of the Jennifer Lopez Wedding Industrial-Complex Canon The JLOWICC is a complex universe filled with dead mothers, worried best friends, sad dinners, and machetes.
By Rachel Handler
backstories 11:07 a.m.
The Long, Odd History Behind the Arcs’ Lost David Berman Collaboration “Song could be about severe self doubt, isolation, paranoia, loneliness, etc. All the good stuff!”
chat room 10:49 a.m.
Debra Jo Rupp Would’ve Liked to Do ‘a Little More’ on That ’70s Show “We had a lot of male writers. I understood that.”
health updates 10:48 a.m.
Jay Leno Broke Several Bones in a Motorcycle Accident His CNBC show Jay Leno’s Garage will end so he can recuperate.
my single is dropping 10:33 a.m.
Rosalía Is Down Bad in New Single ‘LLYLM’ Short for “lie like you love me.”
tv review 10:00 a.m.
Shrinking Desperately Wants You to Like It The new Apple TV+ comedy starring Jason Segel and Harrison Ford is as needy as its protagonist.
album review 9:00 a.m.
Sam Smith Toes the Line on Gloria The singer’s new album is sharp, occasionally cringe-y, and full of heartfelt schmaltz.
sundance 2023 8:00 a.m.
As Seen at Sundance The talk of the ski town at this year’s film festival.
By Rebecca Alter and JJ Geiger
overnights 8:00 a.m.
Shrinking Series-Premiere Recap: Psychological Vigilante What happens when a therapist gets tired of incremental self-improvement and speeds up everyone’s mental health journey? Let’s find out!
the grub street diet 6:00 a.m.
Sylvan Esso’s Amelia Meath Wants the Weird Appetizers “If there’s a bad app, I’ve gotta try it.”
By Alan Sytsma
what dreams are made of 1:47 a.m.
Hilary Duff Is Still ‘Optimistic’ About a Lizzie McGuire Revival You hear that, Disney+?
my music video is dropping 12:10 a.m.
Obviously, There’s a Lotta Lavender in the ‘Lavender Haze’ Video It is once again time to meet Taylor Swift at midnight.
have mercy 12:01 a.m.
Chlöe’s ‘Pray It Away’ Video Takes Us to Church The lead single off her upcoming debut album, In Pieces.
it starts with this Yesterday at 8:59 p.m.
The It Ends With Us Movie Ended Up Casting Blake Lively Justin Baldoni will also star in and direct the adaptation of Colleen Hoover’s best seller.
overnights Yesterday at 8:26 p.m.
The Real Housewives of Miami Recap: Wrong Answers Only Three riveting Housewife fights in a single episode? Simply iconic.
More Stories