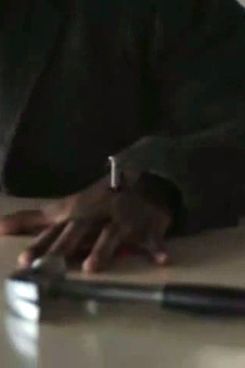 Luther’s second season continued last night with all the creepiness and violence that have come to be the show’s calling card. (This post contains some mild spoilers from last night’s episode, though no actual plot points.) Luther can be a deeply disturbing show — last week’s Punch mask is utter nightmare juice — but last night, it also became a particularly trendy one: Luther got stabbed through the hand! Just sitting at a table! Ayeeee. Hand-stabbing is nothing new in TV or film, but it’s been having quite the renaissance recently!

Who will be next? Perhaps the cast of American Horror Story better start donning some iron gloves.

hsmtmts 7:00 p.m.
HSM’s Corbin Bleu and Hannah Montana’s Jason Earles Join HSM:TM:TS Former Disney Channel Stars are heading to theater camp.
snl 6:11 p.m.
Will Forte to Host SNL This Week And Willem Dafoe the week after that, with musical guest Katy Perry.
🐝 buzz buzz 🐝 5:11 p.m.
Let’s Cast Yellowjackets’ Other Potential Adult Survivors We refuse to live in a world where Van doesn’t make it out alive.
overnights 4:47 p.m.
Below Deck Recap: New Girls and Old Problems Rayna is a complicated person with complicated emotions about her job. It’s what makes her a good reality-TV character!
casting 4:37 p.m.
Congrats to The White Lotus Season-Two Cast on Its Alleged Italian Vacation Haley Lu Richardson, Tom Hollander, and more are making a group reservation.
grammys 2022 4:00 p.m.
Grammys Bet on April 3 Awards Ceremony in Las Vegas At the MGM Grand, per the Recording Academy.
last night on late night 3:52 p.m.
Aidy Bryant and John Early Are Late Night’s Sexiest and Most Aggressive Couple Eat it, Pete and Kim.
remember the 90s? 3:06 p.m.
So You Already Miss Yellowjackets. Here’s What to Watch Next 18 movies and TV shows to tide you over until season two.
extremely online 2:32 p.m.
We Were All Rooting For You, Paul Walter Hauser The acclaimed character actor went full Sirota on Twitter this weekend. Never go full Sirota.
respect the classics 2:01 p.m.
Bono Reviews U2: ‘I’m Just So Embarrassed’ In particular, listening to his voice makes him “cringe a bit.”
the saga begins 1:25 p.m.
White and Nerdy Daniel Radcliffe Will Play ‘Weird Al’ Yankovic in Biopic “I have no doubt whatsoever that this is the role future generations will remember him for.”
chart update 12:32 p.m.
Gunna Edges Out the Weeknd in Race for No. 1 on the Billboard 200 Happy Drip Season to all who celebrate.
gaming 11:17 a.m.
Microsoft Buys Activision Blizzard for $68.7 Billion Amid Sexual-Harassment Suit It’s the biggest video-game-industry deal ever.
overnights 10:27 a.m.
Summer House Season-Premiere Recap: Outside the Boxes Kyle and Amanda need to turn it down several notches (but not before the end of the season, obviously).
art 8:00 a.m.
How Agnieszka Pilat Became Silicon Valley’s Favorite Artist “It’s our obligation to have a relationship with machines so they grow up to be good citizens.”
By Shawn McCreesh
vulture picks 7:30 a.m.
25 Notable New Releases Over the Next Two Weeks Pam & Tommy on Hulu, Ozark’s final season, Sean Thor Conroe’s first novel, and more.
trailer mix Yesterday at 11:58 p.m.
Moon Knight Trailer: Oscar Isaac Is Marvel’s Tired, Confused New Superhero And Ethan Hawke wants him to embrace the chaos.
cancellations Yesterday at 10:24 p.m.
Netflix Takes Paris Hilton’s Cooking With Paris Off the Menu RIP Unicornoli.
apologies Yesterday at 6:55 p.m.
Rachel Zegler Apologizes for Turning Britney Spears’s Tweet Into a Monologue “This is not a situation to be taken lightly, and we should all be lifting Britney up in this pivotal time.”
endings Yesterday at 4:14 p.m.
The Yellowjackets Finale Gave Us All It Needed to Give Not all mystery-box shows are built to sustain the speculation and scrutiny they invite, but this one has laid a strong foundation.
By Jen Chaney
More Stories