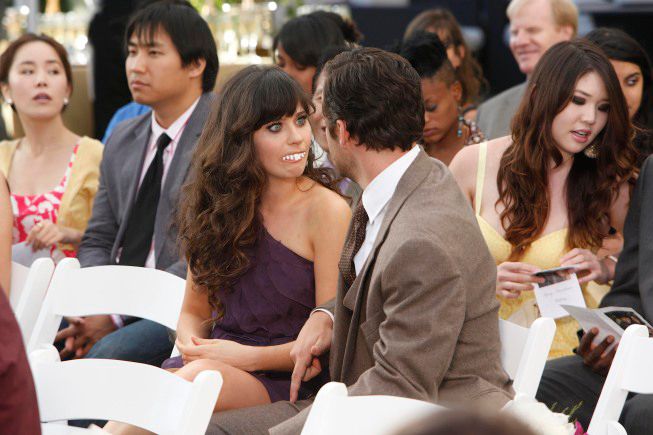 False teeth! Natasha Lyonne! A cute little kid! Last night’s episode busted out a lot of gimmicks, some of which worked better than others. It also forced Zooey Deschanel to ham it up even more than she already had in the previous two episodes, thereby drawing a line in the sand: Basically, if you do not enjoy watching a gifted comic actress cut herself out of a pair of little girl’s bike shorts with a butter knife, then this might not be the show for you.

Which means it’s officially time for this episode’s Adorkable Moment, when the guys do something ridiculous to prove to Jess that they care about her. To refresh, episode one involved everyone singing “(I’ve Had) The Time of My Life,” while episode two involved everyone putting on silly hats. This time around, the adorkability kicks in as the D.J. puts on “Groovy Kind of Love” and the whole gang solemnly performs the Chicken Dance in slow motion. Later, Schmidt will go home with Gretchen. But for now, the group is together, pecking in unison.

New Girl Recap: The Slut Butler Did It

midnights era 12:04 a.m.
Wait, Is Taylor Swift Just Giving Us Straight Answers? There’s nothing better than “Midnight Rain.”
blade running 12:00 a.m.
Marvel’s Blade Loses Director Bassam Tariq Just months before they would reportedly begin production.
cancelations Yesterday at 11:06 p.m.
Netflix Batgirl’d Grendel, Series Not Moving Forward They had already begun filming.
overnights Yesterday at 10:01 p.m.
Monarch Recap: A Woman Scorned We’re only three episodes in and Kayla is already pregnant with her brother-in-law’s child? Monarch’s pacing is wild!
rawr Yesterday at 9:35 p.m.
Hugh Jackman to Dust Off Those Wolverine Sideburns for Deadpool 3 Hugh could it be now?
better call a reunion Yesterday at 9:07 p.m.
Bob Odenkirk to Reunite With Better Call Saul Stars for New Comedy Film He will co-write and co-star in The Making of Jesus Diabetes.
lawsuits Yesterday at 7:46 p.m.
Warner Bros. Sued for Allegedly Embellishing Subscriber Numbers Reportedly claiming “as many as 10 million subscribers.”
buzz! buzz! Yesterday at 6:16 p.m.
Elijah Wood Will Face the Wrath of Misty in Yellowjackets Season Two Only citizen detectives could guess who’s playing Van and Lottie as adults.
the red table Yesterday at 5:21 p.m.
Hayden Panettiere Says Signing Away Custody of Her Daughter Was ‘Heartbreaking’ “Because of the way that it was done, it was very upsetting.”
animazing! Yesterday at 5:15 p.m.
Avatar: The Last Airbender Live-Action Celebrity-Bends New Cast Members George Takei as the Face-Stealer Koh, Danny Pudi as the Mechanist, Arden Cho as June, and more.
"try everything" -shakira Yesterday at 4:12 p.m.
Bye, Guy Ned Fulmer, one of four Try Guys, is leaving the Youtube channel after his “consensual workplace” affair went viral.
vulture 10x10 Yesterday at 3:39 p.m.
The Norma Jeane Puzzle 22-Down, Four Letters: Props in Magic Mike.
comedy review Yesterday at 2:54 p.m.
At His Best, Nick Kroll Is a Mischievous Little Demon In Little Big Boy, Kroll excels when he leans into the juvenile.
By Kathryn VanArendonk
last night on late night Yesterday at 1:22 p.m.
Sigourney Weaver, 6 Feet, Knows How Being a 14-Year-Old Na’vi, 9 Feet, Feels “I was this tall when I was 11,” the Avatar 2 star told Colbert. “I was like this giant spider.”
overnights Yesterday at 1:17 p.m.
The Patient Recap: Empathy for the Devil Running low on options, Alan tries to take the lemon of a rotting corpse and turn it into therapeutic lemonade.
a long talk Yesterday at 1:16 p.m.
Life, Death, and Titus Andronicus Frontman Patrick Stickles used his band’s new album to process loss. Now he just needs to get their van fixed.
lingering questions Yesterday at 1:01 p.m.
10 Unanswered Questions to Worry About After Seeing Don’t Worry Darling What’s up with the dancing ladies? And the plane? What happens in Kiki Layne’s cut scenes? More important, where can I get Alice’s nail polish?
trailer mix Yesterday at 12:58 p.m.
Halloween Ends Will Be the Final Girl in the Franchise The 13th (spooky) and last installment is out October 14.
respect the classics Yesterday at 12:18 p.m.
How Did a Neil Young Cover End Up in an NBC Ad? And why is Young so mad about it?
trailer mix Yesterday at 12:15 p.m.
Phil Spector Is a Creep on Trial in the New True-Crime Docuseries Spector “Phil Spector enjoyed bringing people to his home and locking them inside.”
More Stories