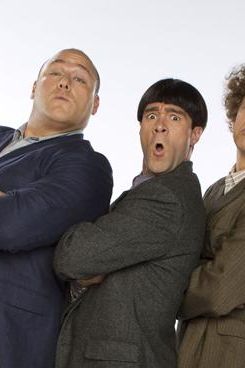 Nyuk-nyuck! Who’s there? Why, it’s the first official look at Sean Hayes, Chris Diamantopoulos, and Will Sasso as Larry, Moe, and Curly from the Farrelly Brothers’ upcoming reboot of The Three Stooges. And … well … they look like the Stooges. Whether you find that a good thing or a puzzling thing will likely determine the success of the hopeful franchise, which also stars Sofia Vergara, Jane Lynch, and Larry David as a nun. Still, we can’t help but picture what might have been if the incarnation of the movie that was supposed to star Sean Penn, Benicio del Toro, and Jim Carrey ever got off the ground. Imagine Benicio making that Moe face! (Imagine Benicio making any face at all!)