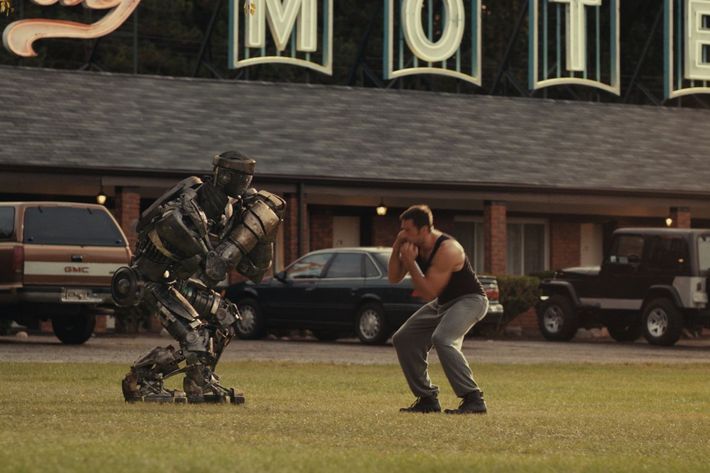 Hugh Jackman’s robot boxing movie Real Steel made $27.3 million this past week. (We were not the only ones looking forward to it!) And as one would expect of a feel-good movie about robot boxing, there is a lot to discuss. Herewith, six Real Steel talking points.

6. Random bits of Real Steel we’ve seen before.
• Zeus’s head was modeled after Darth Vader.
• People accidentally flying down dangerous/fun mudslides was a regular feature of eighties movies (see: The Goonies, Honey I Shrunk the Kids, Romancing the Stone). Hats off to Real Steel for bringing the slide back.
• The Matrix’s influence understandably looms large over action movies, computer movies, and alternate-reality movies. But why do homages to the horrible group rave scene from The Martix Reloaded keep appearing? In Real Steel, the only thing the underground robot boxing club was missing was Neo and Trinity having serious and meaningful sex in the corner.
• Rise of Planet of the Apes gave us Gorilla vs. Helicopter. Real Steel gives us Bull vs. Robot. Here’s hoping for more Animal vs. Machinery moments so long as — in a stark reversal from real life — the animals always win.

Let’s Discuss Real Steel, From Robots Doing the Robot to the Rope-a-Dope Cliche