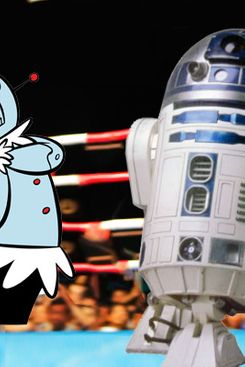 In Real Steel, out Friday, the sport of boxing has been taken over by robots. Boxing robots! This is an inspired idea — like the The Fighter, but with Rosie the Maid. In fact, it made us wonder, what if Rosie the Maid were a boxer? What if all our favorite fictional robots jumped into the ring? Who would win? To answer this very pressing robot sports question, Vulture put together the Ultimate Robot Boxing Tournament bracket, then asked two robot experts — Professor Howie Choset and postdoctoral researcher Ross Hatton of the Robotics Institute at Carnegie Mellon University — to pick the winners. A few ground rules: The face-offs are one-on-one, meaning that robots who usually fight in groups (like the Star Wars Battle Droids) were considered on the basis of their individual abilities. Also, all robot powers (i.e., lasers, flying) were allowed. Herewith, the dramatic round-by-round breakdown.

Using methodology loosely borrowed from March Madness (in that there are several rounds, and higher-ranked competitors don’t meet until later in the tournament), Vulture put together an Ultimate Famous Robot bracket. Optimus Prime was the heavy favorite on the right side, based on size alone, but how would he fare against Battlestar Galactica’s vicious Cylons? And what about the skills of lovable R2-D2, the sleeper favorite on the bracket’s left side? Would Gort’s laser beam trump all? Expert Howie Choset and Ross Hatton weigh in …
Howie Choset: In terms of the characters? Rosie has a stronger vac-completer and all sorts of articulated joints. The only thing C3P0 can do is bore someone to death. Winner: Rosie the Maid
Choset: R2-D2 is undefeated in everything he’s done. He’s versatile. He can do everything. I think at some point he could probably fly. He’s not a pet, like K-9 is. Winner: R2-D2
Choset: This was a little tough. Everyone likes Wall-E, but in the end Astro Boy would win. Wall-E has the trash compactor, and maybe if he grabs Astro Boy? But flying’s pretty good. Winner: Astro Boy
Choset: With the new Cylons, they’re really violent, vicious, articulated, agile creatures. So they’ll win. The old ones, it’s still not clear. Battle droids, really all they have to do is just die — so if you have a million battle droids against one Cylon, then maybe. But if it’s one droid against one Cylon? There’s no chance. The Cylons will always win. Winner: Cylons
Choset, to Ross Hatton: I’m curious, which one did you go with? Hatton: I think Optimus Prime. Choset: Yeah, yeah, Optimus Prime. Just because of how big he is. In these things, size can be everything. Winner: Optimus Prime
Choset: I’m gonna go with the old Gort. He’s got that laser beam. That’s all you need. Winner: Gort
Hatton: I think Marvin, given all of his incredible hardware, is gonna win on that one. I have a lot of respect for clockwork, but I think Marvin wins out there. Vulture: You don’t think the psychological issues would get in the way? Hatton: I don’t think so. I think he can work around them. Winner: Marvin the Paranoid Android
Choset: This one was the one that inspired the most discussion. Johnny 5 pretty much won because again, he has lasers. That can blow up tanks. The robot from Lost in Space can alert that there’s danger coming, and maybe it’s only danger for one person — Mr. Robinson — but really, we don’t even know what those spinning circle things do. Those antennas on top of him? We don’t know what he does other than walk around and say “Danger!” Winner: Johnny 5
Quarterfinals: R2-D2 vs. Rosie the Maid Choset: Rosie vs. R2-D2? That’s a tough one. Hatton: I think R2-D2 would have to win there. R2-D2 has more of all those things. Choset: Okay, we’ll go with R2-D2. Hatton: I think anytime anyone needed a piece of technology, R2-D2 had it. He had scanners for looking for life when they were waiting for Luke to come back from the ice planet … Choset: It’s a boxing match. Hatton: … he had heightened things, he had cutters … Choset: But it’s a boxing match and Rosie has arms. Hatton: We’ll go with R2-D2. Winner: R2-D2 Quarterfinals: Astro Boy vs. the Cylons Choset: The Cylons. They’re bad!Winner: Cylons Semifinals: R2-D2 vs. the Cylons Choset: I’m goin’ with Cylons. Hatton: I think Cylons. I think R2-D2’s good, but not that good. Winner/Finalist: Cylons
Quarterfinals: Optimus Prime vs. Gort Choset: Oh, Optimus Prime. Winner: Optimus Prime Quarterfinals: Marvin the Paranoid Android vs. Johnny 5 Choset: Johnny 5. He’s got lasers! Hatton: Marvin’s gonna walk around in a circle while Johnny goes after him. Johnny wins. Winner: Johnny 5 Semifinals: Optimus Prime vs. Johnny 5 Choset: Optimus Prime. Hatton: Optimus Prime. Vulture: Because it’s just brute force, right? Choset: Oh yeah.Winner/Finalist: Optimus Prime
Choset: I think when it’s one-on-one, Optimus Prime is gonna win ‘cause he’s big. Hatton: The only thing that might hold up Optimus Prime is his sense of honor. Choset: Cylons kill people! Hatton: He’d have to overcome his sense of honor in not fighting dirty. Cylons fight dirty. If he can overcome that, and I think he probably can …  Choset: I think the Cylon will fight dirty and beat Optimus Prime, definitely. It could go in and pull a hose out … Hatton: Yeah. That’s my worry with it. Choset: Yeah, this one’s hard. One second, let me ask this person calling. [Speaks into phone.] Why do you say that so quickly? [Pause.] Yeah, but don’t Cylons fight dirty and stuff? [Hangs up.] He says Transformers. I guess two out of three is Transformers. Champion: Optimus Prime