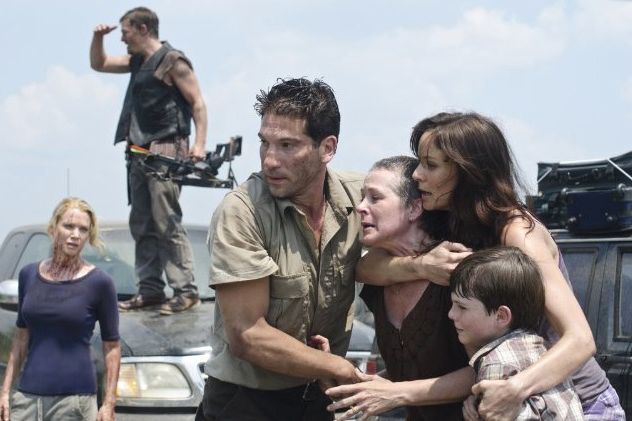 There’s a scene at the end of Sunday’s season premiere of AMC’s The Walking Dead that’s completely mesmerizing. The characters take a moment to appreciate a fleeting instance of natural beauty, framed perfectly so we see the characters watching both the view and each other. At first they’re tentative, and then they’re blissful, daring to grant themselves, and the audience, even a brief reprieve from the relentless zombie slaughtering. All we hear is TWD’s signature ambient noise of chirping cicadas and the gentle rustle of humidity-heavy leaves, and we know this peaceful moment won’t last, and the characters know this peaceful moment won’t last, and of course it doesn’t. But that little vignette — more than any of the wildly revolting (wonderful) zombie deaths, or the panting closeups, or the sweaty, filthy foreheads — highlights exactly what The Walking Dead is capable of. But last year, the show didn’t seem to realize what that was; does this scene mean it will in Season 2?

In that closing scene from the season premiere, we get to see some of the characters have a moment of clarity. Oh, I am still me, because before all the carnage and the loss of everything I knew to be true, I experienced joy just like I’m experiencing it now. It’ll be interesting to see how the show develops in the next few months, not just because of showrunner Frank Darabont’s departure but also because there were only six episodes of TWD in its first season. There’s a really brilliant show buried in there somewhere, but so far, The Walking Dead’s been stumbling around at half-intelligence, just searching for some delicious, delicious brains.

Can The Walking Dead Turn From ‘That Zombie Show’ Into Something Deeper?