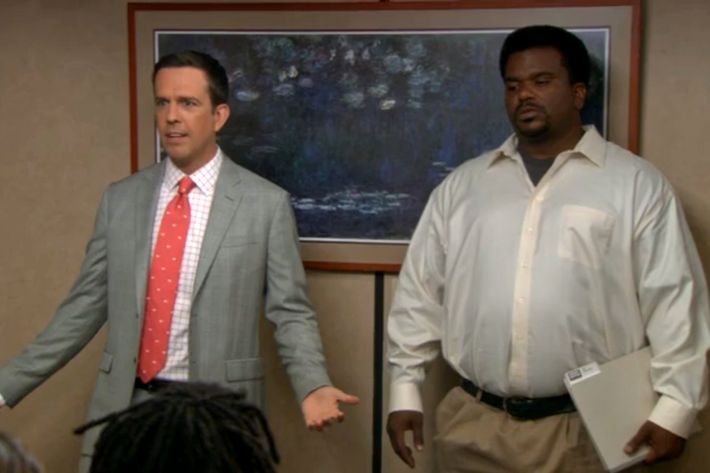 Remember last week’s heartwarming conclusion, in which Andy Bernard got his nickname tattooed on his tuchus? Well, for this week’s Thursday-night promo, NBC digitally replaced said tat with an inky simulacrum of Whitney Cumming’s face. Barf. Unfortunately, tonight’s episode is only slightly more palatable than its ad. Even the cold open tanks and cold opens are The Office’s thing. The gang finds a dog locked in a junky sedan, windows rolled up, and everyone reacts like Neanderthals. Let’s just say the best plan to free the dog is had by Kevin, who locks himself in another van and passes out.

By the end of the episode, Andy’s a real boss. He’s told off his would-be rival and when he finds Jim screwing around, he doesn’t laugh. He reacts sternly. Which is good. I mean, come on, these people are being absurd. They may or may not have let a dog die! I like to think things ended back on track. We finally have Andy the Boss with a capital B. He is prepared, we hope, to take action. We have Darryl back on track. We also have Jim and Pam’s relationship ready to be tested. And we might have some new characters in the form of recently hired warehouse workers. What we don’t have is much story or believable characters or Robert California. Where in the world is Robert California? Hit it Rockapella!

gods and monsters 9 mins ago
Chapter 1: Everything We Know About the Future of the DC Universe Congrats to Viola Davis, who remains the most unscathed DC Universe actor.
2 king 2 hill 28 mins ago
Travel Back to Arlen in a New King of the Hill Reboot Hulu announced a revival of the beloved series on January 31.
timelines 3:10 p.m.
The Complete History of Ezra Miller’s Controversial Career From kidnapping allegations to a plea deal for unlawful trespassing to the DCEU’s master plan.
chat room 2:48 p.m.
Nelson Franklin Is Thankful He’s Not the ‘Uglier George Santos” Comedy’s go-to That Guy discusses appearing in — or auditioning for — most of your favorite sitcoms.
celebrity memoirs 2:14 p.m.
Pamela Anderson Knows Even a Memoir Can’t Tell All Though there are not many new revelations, ten stories stuck out.
essential episodes 2:02 p.m.
Columbo Is the Ultimate ‘Rich People Are Weird’ Show Peter Falk’s rumpled detective takes down lots of wealthy loonies.
sad gay representation 1:18 p.m.
The Last of Us Fans Are Screaming, Crying, Streaming Linda Ronstadt “Long Long Time” is running (back) up that chart.
sundance 2023 1:04 p.m.
Sundance’s Year of Existential Crisis Yielded Back-to-Back Megadeals Insiders call this year’s Sundance a return to form, with several all-night bidding wars and multiple eight-figure deals.
By Chris Lee
backstories 12:35 p.m.
‘There Couldn’t Be Any Normal Scenes in This Movie’ Damien Chazelle and his collaborators explain Babylon in three key scenes.
By Bilge Ebiri
hive mentality 12:11 p.m.
Dominique Fishback Isn’t Doing Much to Rehabilitate Stan Culture’s Image As an obsessed fan in Donald Glover’s new series, Swarm.
hbo axe’d 12:04 p.m.
HBO Max’s Abandoned TV Shows Adopted by Tubi and Roku More than 200 titles from Warner Bros. Discovery are moving.
album review 12:00 p.m.
Lil Yachty’s Great Gig in the Sky The rapper’s surprising new psych-rock album delights in sensory overload.
vulture 10x10 12:00 p.m.
The Scooby Puzzle 7-Down, Ten Letters: Batman’s Home
reading is what? 12:00 p.m.
And Don’t F&%K It Up Chronicles Drag Race From Vaseline Lens to Emmy Gold “Come for the tea, stay for the shade.”
yelling 11:52 a.m.
It’s Time for a Departure From ‘Bottle Episode’ Another format-breaking episode, another widespread misapplication of a specific TV term. This must end.
listings 10:31 a.m.
Joan Didion’s Apartment Is for Sale Missed out on the estate auction? Seven and a half million dollars will get you the whole house.
obits 10:13 a.m.
Cindy Williams of Laverne & Shirley Dead at 75 “Knowing and loving her has been our joy and privilege,” said her children in a statement.
crime 10:10 a.m.
Chicago Prosecutors to Drop Sex-Abuse Charges Against R. Kelly Two prior convictions guarantee Kelly will be behind bars for decades.
grammys 2023 10:00 a.m.
Who Will (and Should) Win at the 2023 Grammys? And will Beyoncé finally earn an Album of the Year trophy?
oscars 2023 8:00 a.m.
Lydia Tár Is Not an Art Monster The quiet redemption of awards season’s most divisive character.
More Stories