The Opposite of Relaxation
Season 2 Episode 8 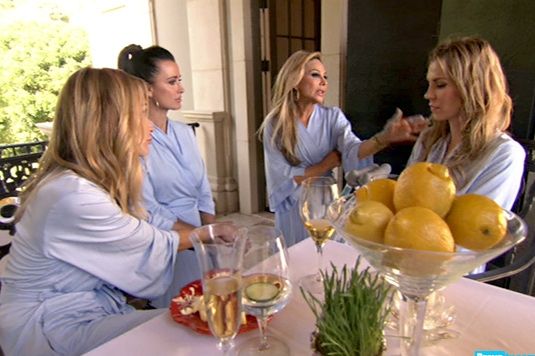 So, Adrienne Maloof has a spa in her basement, and she washes raw chickens with dish soap. Look — as far as I’m concerned, those are two “pros.” I’ve not been coy in the past when I’ve sung Adrienne’s praises. No, I’m not impartial: Yes, all of these women are my glorious daughters. But the Maloof has emerged, giant head and creamy-yet-somehow-also-tan exposed shoulders above the others in being this season’s MVP. I remember being concerned last year that she wouldn’t be invited back to the show. She was too normal, in a way, and the game she had with her bickering husband was too flimsy for the all-caps drama that fuels this series. But it’s a good thing she is back — who knew this series needed a moral center? Now that there’s body count on the show (Remember Russell? Dead Russell? He was in the previews for next week’s episode and it was like seeing a ghost), it’s a relief somehow to see somebody on this show who is concerned with other people’s feelings.

• Brandi’s jumpsuit. I didn’t know they made jumpsuits in Capri-length, harem-pant varieties, though I was relieved to see the style didn’t diminish her exquisite camel toe one bit. The camel toe is the smile of the body, if the body were a face! My mother told me that. My mother did NOT tell me that.
• One of Adrienne’s manicurists looked like she was rejected from the staff of Millionaire Matchmaker for not being rockabilly enough. Bravo, Bravo! Your crossover/personnel recycling is commendable.
• Kim going on about how she didn’t think Brandi had a pretty mouth is probably up there in terms of this season’s best monologues. In fact, Kim found Brandi’s mouth to be a “dirty, dirty, ugly mouth.” What is this, Deliverance?
• WHO WAS THE MYSTERY MAN with the hairy forearms that Kim was with in the preview for next week’s episode? Or, how can one woman be so lonely when she’s been secretly dating somebody? We’ll have to wait to find out.

harry's styles 12 mins ago
Don’t Worry Darling Struggled to Make Harry Styles’s Hair Look Bad The biggest challenge happening behind the scenes, we’re sure.
father son and house of downey Yesterday at 10:45 p.m.
Netflix Hopes Robert Downey Jr./Sr. Will Win an Oscar The streamer is reportedly planning to push the Team Downey documentary for Academy Award consideration.
overnights Yesterday at 10:01 p.m.
Kevin Can F**k Himself Recap: Near-Death Energy Kevin causes a lot of problems, but he also solves a bunch in his own special way.
overnights Yesterday at 9:30 p.m.
Below Deck Mediterranean Recap: It’s Getting Choppy Out Here Natasha, Kyle, and Jason’s “no one gets us” routine is getting old.
overnights Yesterday at 9:00 p.m.
90 Day: The Single Life Recap: No One Has Boundaries! Baby’s first love bombing.
let's go party Yesterday at 8:44 p.m.
Aqua on Their Song ‘Barbie Girl’: ‘It Just Keeps On Giving’ And no, the band isn’t mad about not being on the Barbie movie soundtrack.
nanette alert Yesterday at 6:01 p.m.
Hannah Gadsby to Bring Their Body of Work to Netflix The comedian signed a new deal for a third stand-up special and a multi-comic showcase with the streamer.
remembrance Yesterday at 5:58 p.m.
Pharoah Sanders Found His Voice in New York City He arrived broke, homeless, and with little more than his saxophone, and left the unofficial leader of the spiritual-jazz movement.
from the desk of lady whistledown Yesterday at 5:17 p.m.
Netflix Officially Settles The Unofficial Bridgerton Musical Lawsuit There will be no court(ship) after all.
snape's snipes Yesterday at 4:38 p.m.
Alan Rickman’s Decades-Old Diaries Are Still Hot Goss Snippets of Snape’s snipes.
close read Yesterday at 3:29 p.m.
House of the Dragon’s Brutal Birth Obsession Isn’t Realism. It’s Cruelty. In three separate instances, the Game of Thrones prequel reduces a birthing woman to the limits of her body.
on the record Yesterday at 2:09 p.m.
A Timeline of Black Panther: Wakanda Forever Taking Forever Kevin Feige explains why Marvel didn’t recast T’Challa, while Lego appears to spoil the identity of the next Black Panther.
midnights era Yesterday at 1:52 p.m.
Wait, Is Taylor Swift Just Giving Us Straight Answers? Midnights track seven is called “Question…?”
gamer time Yesterday at 1:20 p.m.
The Last of Us Teaser Arrives on The Last of Us Day Bella Ramsey and Pedro Pascal star, along with Storm Reid as Riley.
vulture 10x10 Yesterday at 1:13 p.m.
The Defiant Puzzle 9-Down, Four Letters: Haircut for Joan Jett or Miley Cyrus.
unpressed Yesterday at 12:28 p.m.
Kiki Layne Isn’t Worried About Being ‘Cut’ From Don’t Worry Darling She got her man and her check.
fine lines Yesterday at 12:14 p.m.
Kelsea Ballerini’s Country Favorites Five classic lyrics that inspired the singer to cut loose on her new album.
the festival circuit Yesterday at 12:06 p.m.
A$AP Rocky Takes ‘Full Responsibility’ for Short Rolling Loud Set At least he brought out GloRilla.
housewives institute bulletin Yesterday at 12:00 p.m.
What in the Lisa Rinna M&M? The celebrities are sounding off about the ‘wives, and the RHOA ladies are pretty in peach at the reunion.
freaky friday Yesterday at 11:49 a.m.
Elizabeth Banks Could Do The Martian, But Could Matt Damon Do Cocaine Bear? “Matt Damon, love him. He’s having to figure out how to survive. I want that role.”
More Stories