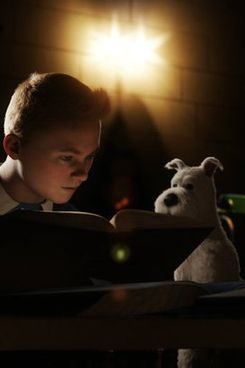 Yesterday, Steven Spielberg unveiled in Brussels his motion-capture take on the famous (at least in Europe) Tintin graphic novels. Early reviews of The Adventures of Tintin: Secret of the Unicorn from the francophone press seem promising, with Belgian newspaper Le Soir dubbing it “a great popular adventure film, in the best sense of the term.” A Parisian newspaper by the same name wrote: “Hergé would have loved this Tintin, full of character.” Spielberg himself said as much, that Hergé would’ve approved of his translation of the young, scrappy detective and his faithful dog, Milou, to the big screen. “It is a great honor to bring Tintin home. Brussels is his hometown,” Spielberg said before the screening, according to French paper Midi Libre, which called Tintin “a vacation film.” (Also in the best sense of the term.) Tintin is set to hit U.S. theaters later this year, on December 23. [BBC News]