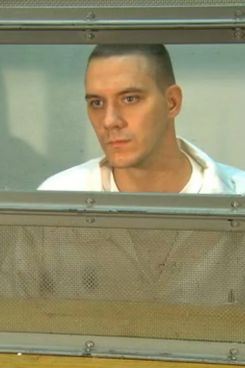 Werner Herzog’s death row documentary Into The Abyss, about two men who committed a triple homicide and the people who know them and their victims will open this year’s DOC NYC film festival on November 2. (Herzog’s Cave of Forgotten Dreams opened the inaugural festival last year.) There are over 50 documentaries on the slate, among them I Want My Name Back about ur-rappers the Sugarhill Gang’s battles with the music industry, Jonathan Demme’s film about a New Orleans resident I’m Carolyn Parker: The Good, the Mad and the Beautiful, Herzog’s condensed version of a the previously existing documentary Happy People: A Year in the Taiga about Siberian fur trappers, and a film about Charlotte Rampling’s career. Take a look at the rest of the fest’s early lineup.

The complete schedule can be found here.

wonderstruck 10:18 p.m.
Taylor Swift Wanted To Be in Twilight: New Moon This night is sparkling. Don’t you let it go, Edward!
overnights 10:01 p.m.
The Real Housewives of Dubai Recap: The Wicked Witch of the West This might be Caroline at her worst all season.
overnights 9:00 p.m.
The Real Housewives of Beverly Hills Recap: Disco Brawl Imagine a big conflict wheel spinning faster and faster, imaginary conflicts flying everywhere.
hush-hush 8:20 p.m.
HBO Max Has Been Taking Stuff Down Without Warning for Weeks Update: Another 37 titles will be cut.
mental health 7:49 p.m.
Jonah Hill Takes a Break From Press Tours Due to Anxiety He directed and starred in an upcoming documentary “Stutz.”
release your job 6:20 p.m.
Christine Quinn Is No Longer Selling Sunsets Seasons six and seven of the Netflix show will reportedly go on without her.
r. kelly 6:18 p.m.
R. Kelly Chicago-Trial Opening Statements Began With Harrowing Abuse Allegations Prosecution warned the jury that the videos in evidence will be “difficult to watch.”
coming soon 4:17 p.m.
Abbott Elementary Is Back in Session on September 21 And running through the whole school year with a full 22-episode season.
buzz! buzz! 3:37 p.m.
Who Manifested Simone Kessell As Adult Lottie in Yellowjackets? Looks like Courtney Eaton is now a series regular.
sweet! 3:04 p.m.
Ellie Kemper and Zach Cherry to Co-host The Great American Baking Show The Bake Off spinoff premieres in 2023.
overnights 3:02 p.m.
Love Island Season-Finale Recap: Ti Amo Somehow Luca and his ability to generate indignant fury out of thin air made it to the finale.
merrily we cast along 2:08 p.m.
Jonathan Groff and Lindsay Mendez Join Daniel Radcliffe in Merrily We Roll Along We hope the priest from Lady Bird will be happier with this production.
1:30 p.m.
‘Foo’ or ‘Fool’? A Chat With the Cast of This Fool  A generational divide, explained.
christmas in august 1:27 p.m.
Darlene Love and Mariah Carey Are Battling for the Christmas Throne And so is Christmas-exclusive singer Elizabeth Chan.
overnights 12:53 p.m.
Reservation Dogs Recap: Hard Times Being physically present is not the same as “being there” for someone.
trailer mix 12:36 p.m.
Wednesday Teaser: The Addams Family Has Scholastic Problems and Spooky Solutions Jenna Ortega stars as the titular piranha-wielding teen.
read on 12:30 p.m.
Salman Rushdie Book Sales Soar Following Attack The Satanic Verses author has reentered best-seller lists while recovering.
american crisis 12:11 p.m.
Andrew Cuomo Can Keep $5 Million for COVID-19 Book, Judge Rules After an ethics panel previously said he had to give it up for reported improper use of state resources.
it's a re-sabotage 12:00 p.m.
Netflix Is Reviving Competition Classic The Mole This Fall As long as no saboteurs get in the way.
vulture 10x10 12:00 p.m.
The Green Puzzle 5-Down, Five Letters: Actress John Travolta once called “Adele.”
More Stories