Anne Hathaway carries signs reading ‘Blackboards not Bullets’ and ‘Blackboards not Banks’ as she protests at Union Square on for the Occupy Wall Street campaign with her boyfriend Adam Shulman. She then proceeded to march down the street along with the other protestors. Pictured: Anne Hathaway Ref: SPL335630 171111 Picture by: Splash News Splash News and Pictures Los Angeles: 310-821-2666 New York: 212-619-2666 London: 870-934-2666 photodesk@splashnews.com Photo: Splash News/???? www.splashnews.com

We would usually make a joke about how she’s filthy rich and anything but disenfranchised; however, she hosted an awards show with James “Wake Me Up When It’s Over” Franco, so, yes, SHE IS THE 99 PERCENT. [WWTDD] 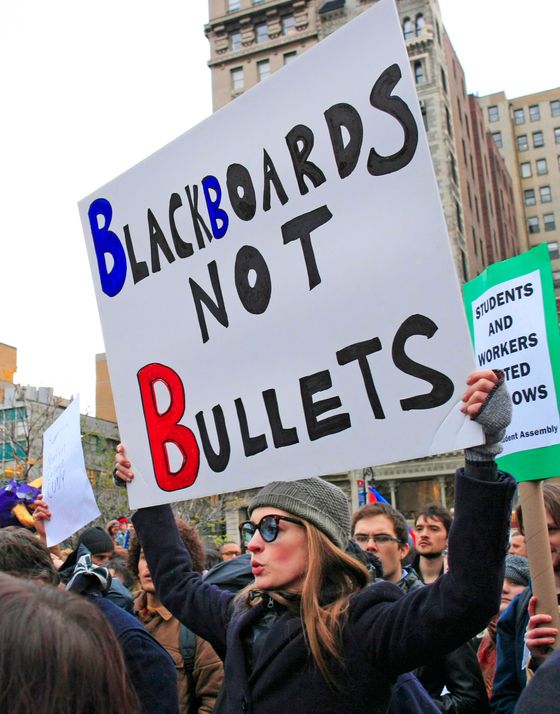 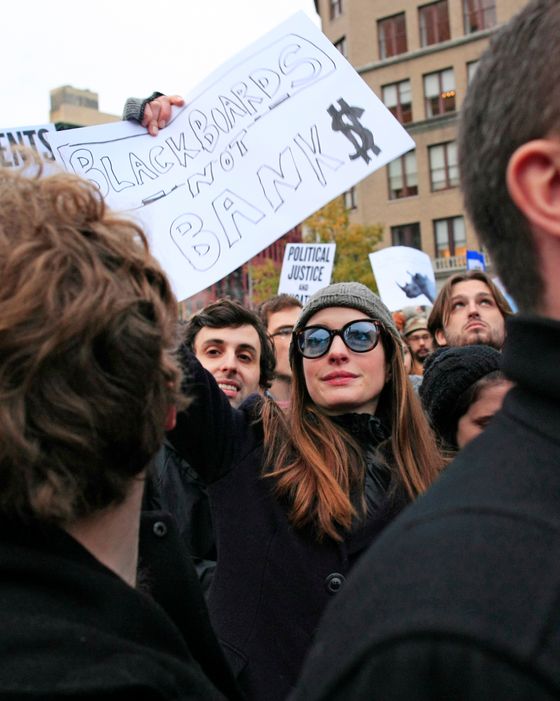 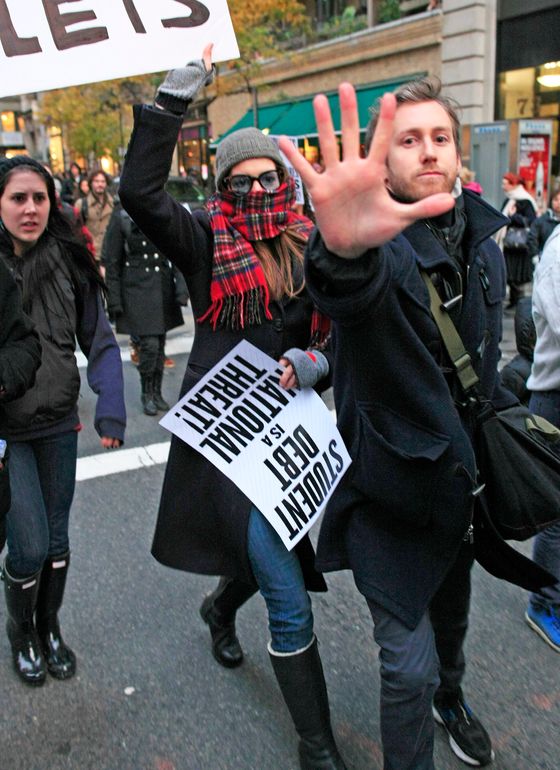 her man her man her man 2 mins ago
Cher Knows Her New Relationship Might Seem ‘Kind of Ridiculous’ She’s 40 years older than her “fabulous” new boyfriend, Alexander Edwards.
never again 8:17 p.m.
Hellboy Taught David Harbour ‘Not to F— With’ Beloved IP A hell of a lesson.
tributes 6:45 p.m.
The Music Industry Mourns Fleetwood Mac’s Christine McVie Even Bill Clinton said goodbye to the Songbird.
gma3 goss: what you need to know 6:23 p.m.
Sorry, Were We Interrupting Something on GMA3? T.J. Holmes and Amy Robach were a giggly duo of hosts for the first time since news of their relationship broke.
villainous behavior 6:03 p.m.
Los Espookys Canceled by HBO, Enemies of the Moon HBO needs to sit in the corner and think about what they’ve done.
oscar futures 5:37 p.m.
Oscar Futures: Is the Academy Ready to Forgive Will Smith? He’s banned from the ceremony for the next ten years, but could Will Smith nab a nomination for Emancipation anyway?
By Nate Jones
tributes 5:07 p.m.
Takeoff’s First Posthumous Verse Appears on Metro Boomin’s New Album Alongside A$AP Rocky on “Feel the Fiyaaaah”
power rankings 4:46 p.m.
The Final Survivor Season-43 Power Ranking A last look at who is in the best position to win it all.
vulture lists 4:30 p.m.
A Ranked Guide to John Wick–Inspired Movies Evaluating the latest generation of stunt-heavy, fist-fighting action movies, including this weekend’s Violent Night.
follow friday 4:20 p.m.
Brian Robert Jones Has a Root Canal After This We chatted with the musician about being a rough hang, boy bands, and Caleb Hearon.
delectable 4:18 p.m.
Hollywood Couldn’t Risk Making a Movie Like Bones and All Luca Guadagnino knew Hollywood didn’t have the requisite taste for flesh. So to finance his first American-set movie, he turned to an Italian backer.
masters of press 3:41 p.m.
Keke Palmer’s Nope Press Tour Deserves an Archive She does her Angela Bassett impression … with Angela Bassett!
theater review 2:45 p.m.
Ain’t No Mo’ Takes a Jubilantly Unrespectable Flight to Broadway Jordan E. Cooper’s satire doesn’t button up in a bigger venue.
now streaming 2:42 p.m.
The 5 Best New Movies and TV Shows to Watch This Weekend Let Matt Rogers and David Harbour usher in your holiday season.
fandom 2:35 p.m.
No, That Wasn’t Danny DeVito You Just Saw at a Party in Bushwick Just hundreds of semi-bald lookalikes.
vulture lists 2:26 p.m.
The Most Horrific Twilight Character Backstories, Ranked by Absurdity You only get a glimpse of Stephanie Meyer’s twisted mind in the movies, but the books really let the freak flag fly.
ho ho ho 2:18 p.m.
Sexy Santas, Ranked There’s something about that twinkle in his eye …
awards szn 2:04 p.m.
New York Film Critics Circle Gets the TÁR Love STÁRted Along with wins for RRR, Aftersun, and Marcel the Shell With Shoes On.
workaholics 1:47 p.m.
So You Thought BTS Was Going on Break? LOL A guide to their solo projects and upcoming group activities (so far).
overnights 1:33 p.m.
Slow Horses Recap: Walk Into It After the combustible season-two premiere, “From Upshott With Love” taps the brakes a bit too hard.
More Stories