It’s a pretty safe bet that in order to maintain balance, the producers of RHOBH will hit the gas on the fluffmobile moments after the surface of any real darkness is scratched. Which is to say, right after we were treated to part two to the world’s vaguest tea-time conversation about domestic violence, we got a literal rodeo of distractions. There was American Idol nobody Ace Young singing the funniest Housewives song since Gia serenaded Melania on RHONJ! There was a cat on the shoulder of a child’s party magician named Fantastic Fig, whose website is captivating! And, as an early Hanukkah gift from our friends at Bravo, there was some wonderful footage of Kim Richards on a mechanical bull. And I didn’t even mention the triumphant return of Kevin the Gay-sian Wedding Planner! All this, and why? Because Camille had the nerve to say out loud that Taylor was abused by her late husband.

Don’t worry — Taylor got back at Camille later when she didn’t return any of her texts or accept her apology. That’ll teach Camille for refusing to stay silent and treating domestic violence like something that should be dealt with openly!

And speaking of Taylor: In one sense, this episode was the much darker part two — the Batman Returns, if you will — of Taylor’s “I throw insane birthday parties for a child too young to appreciate them” arc. But in other ways, it is the bleakest episode yet, if only for its insights into how Taylor and Russell publicly functioned as a couple while recklessly spending other people’s money, and how the people around them reacted or didn’t to the abuse she told them about in private. But let’s back up to where we last left these damsels — at Lisa’s tea.

Remember how Camille grew a pair last week? And how she called out that maybe the reason why Taylor was, in fact, having some kind of nervous breakdown in front of them had less to do with Lisa not being her BFF and more to do with her being abused and very hungry? Or possibly lying about what she was going through, which is a strain of the story mentioned by you lovely commenters last week, and by Camille herself when she said she didn’t know what to believe when it came to what Taylor had told them? Anyway, after Camille had the decency to speak out against the alleged abuse at Russell’s hand that Taylor was condoning by staying with him, nobody really backed her up. So she left. “Oh well,” everybody said, and then Taylor got really mad once she was gone, because Camille had had the audacity to say what Taylor herself had already said, only in private. Because Russell abusing her was a secret. Therefore, I guess Taylor feels extra bad about selling her own abuse photos to Entertainment Tonight, except, oh wait, she is a massive hypocrite and possibly a sociopath? I don’t know. I relate to Lisa when I say that I, too, am “confused” by the widow Armstrong. I know there are those of you who think she may not have been abused at all. I think she was — that’s my gut — but I don’t think that precludes her from having once been a grifter with no moral compass. I don’t know what Taylor’s deal is officially, but I don’t think it’s good. To her credit, I think Russell was way worse, but I recently read a review of the new Eva Braun biography and I’ll say this: While Braun seemed to like fashion and jazz and didn’t personally invade Poland, I can’t really say I’m a fan.

At the very least, this episode made sure to show that when it came to Taylor, hypocrisy and transparency do not go well together. Not like shorts and cowboy hats! In other words, when Taylor agreed to be on this reality show, she had to know that all of the details of her life would emerge. And the abuse ones are not even the most sordid, when you consider that if her allegations were true, those were Russell’s misdeeds and not hers to be ashamed of. I mean, it must have been a real kick in the cunt for the investors the Armstrongs reportedly fleeced out of millions of dollars to see their cash being funneled into horse-themed carnival games and cakes baked into horse shapes and — oh, yes — an actual horse.

That’s right: Taylor and Russell bought their daughter Kennedy a real horse for her 5th birthday. And Dana-Pam, who is still not in my circle of acceptance yet as I still believe her to be a jerk, did at least have the insight to call the Armstrong Horse Purchase phenomenally stupid.

Another major theme of this week’s episode dealt with the very deliberate cleaving of certain alliances. Adrienne was pitted against Lisa in a dispute having to do with the Vanderpumps choosing Planet Hollywood as the destination for Pandora’s bachelorette party instead of Adrienne’s own trashy casino. (Personally, I think all casinos are trashy, nothing against the Palms. Also, I think Vegas should be flattened and replaced with low-income housing.) As for Lisa and Adrienne, I have a feeling their not-at-all-producer-manufactured spat will work out just fine, since, say what you like about them in terms of being shallow or duplicitous, both of those women are direct at best and at the very least, not crazy. Which is a big deal on this show, which triumphantly pits its viewers at the mercy of a cast that’s mostly, in Taylor’s terms, “off their rockers,” or, simply, narcissists with the combined emotional maturity of one child actor.

Speaking of which, I did appreciate the return of Kim in full form this week, from her confusing her beau’s wall hanging of a bridge for a wall hanging of a boat, to her confession about how she was only used to riding “Disney Horses” instead of regular horses when she was a girl. I guess Disney Horses would bow down and let you mount them, and then tap their back hooves together and burst out into choruses of “Bare Necessities” or some such thing. The point of that story is that it must have been wonderful for Kim to be younger than she is today.

And Kyle (to whom I was concerned that I was being too harsh until my gorgeous commenters assured me for the most part that I wasn’t) didn’t make a particularly good show of her support of Camille, at least in front of Taylor. It was easier for Kyle to later admit in her testimonial that Taylor had no right to be angry at Camille for breaking the wall of silence at Lisa’s Tea. But when Taylor joked that Camille would have been “shoveling shit” if she’d showed up to Taylor’s child’s inappropriately costly birthday party, Kyle laughed along with that ghoul like the disloyal shill that she is deep down for whichever friend she happens to be around at the time. It’s a technique she exhibited when Adrienne ripped into Lisa in front of her, too. There’s a fine line between being a good listener and being willing to mutely sympathize with anybody talking shit about your friends.

Also from the category of “feuds either revived or created” on this week’s show is Brandi versus Kim, which is still a thing. Brandi, who is technically still on the show, showed up at Kennedy’s blood-money-fueled birthday horse-stravaganza and hobbled over to Kim’s table to “break the ice” after the show producers had the courtesy to entertain us with a fun “Showdown at High Noon” shot of the two of them. 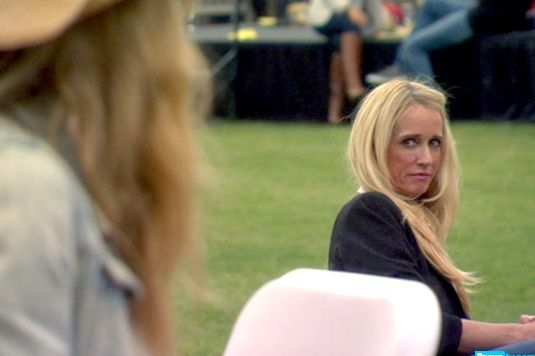 But, in the process of saying “Hi” and then, quickly, “Bye” to Kim (who is almost as good at being chilly to people she’s mad at as she is at telling apart a bridge from a ship), Brandi auditioned for the post-tennis doubles scene in the new film Awkward Annie Hall. Would you like to invest in it? If so, please send a check to Taylor Armstrong and make it out to Cash.

And finally, just before we were treated to the Ace Young ballad that lyrically insisted that having a child makes every day feel like a birthday — in which case I am going to postpone having kids for as long as possible so I don’t have to check Facebook constantly in between crying jags — we got another chance to remember just how creepy Russell really was. You know, before he committed suicide? Which may or may not have been fueled by the realization that he and his wife had painted themselves into a corner in terms of all of the money they were stealing from people? Anyway, he snapped at Dana-Pam, which under usual circumstances I would be in favor of, but in last night’s case, it just made me nervous. Gee, maybe it was because of all of the domestic violence talk. Anyway, that guy seemed like a huge creep. I said it! Go ahead, Taylor. Don’t text me back!

Finally, I would like to go on the record as saying that it is really, truly despicable that Taylor ever allowed her daughter to be on-camera for this TV show. Of all the crimes she may have committed — literal crimes, the kind they throw you in jail for — exposing her still-developing child to not only the spotlight of the public eye but the physically unsafe environment that she claimed existed when Russell was still around is by far the worst thing she has done. I hope Kennedy turns out okay. I hope she is better adjusted and smarter and kinder and more morally sound and boundary-conscious than her parents ever were. Because the garbage this poor kid has been exposed to at such a young age may wreak greater damage in her later life than her inability to know how to mount a “Non-Disney Horse.”

Other things from last night’s episode you may or may not wish to discuss in the comments below include:

- Kim comparing herself to an Arabian Horse, then meowing

- The firemen at Taylor’s party as an attraction. How many homes burned that day because the only people who could help were being flirted with?

- Finding out Mauricio is Jewish. Somewhere, Jill Zarin’s ears pricked up at that information and her ovaries began working again.

- Kennedy opting out of a hug from Ace Young. Good girl, Kennedy! I think you might be all right after all.

The Real Housewives of Beverly Hills Recap: Pity the Children