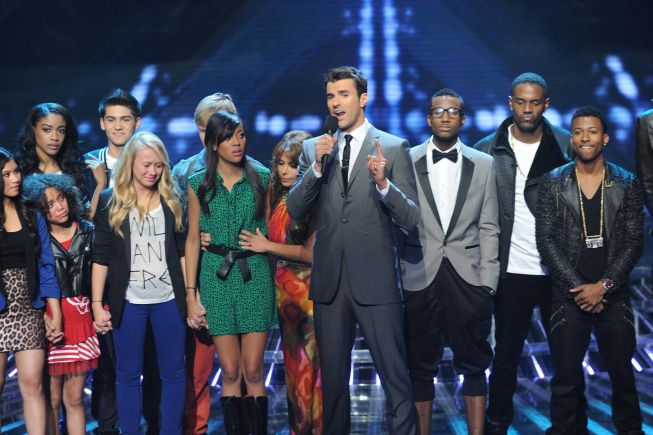 The show begins, as it always has and always will, with 34 minutes of recap. It’s starting to become like a soap opera, where if they don’t constantly remind you of everyone’s names and motivation, you’ll somehow forget where you are and what you’re watching. And the wonderful thing is: They’re right.

Is there a new voice-over guy? I remember hearing a voice at the top of the show last night that wasn’t Steve Jones’s, and now there’s a brand-new one that is very Eddie Murphy doing the “C-I-L-L My Landlord” poem on SNL. Does anyone have a contract with The X Factor?

Paula, in a deft turn of phrase that is unmistakably Abdul, says: “I don’t … know … how … America is going to … choose … who … their favorites.” Paula? Paula, are you there? “Are.”

Steve Jones has a thing he has now done at the top of two shows in a row, where he points out two people in the audience off stage right, and then one very special one off stage left. Listen to me: When I perform for 30 people under two lights, I cannot see a thing past the lip of the stage. The X Factor stage is lit by laser cannon and is sometimes literally on fire. Steve Jones is using trickery. But you know what? Brother looks good in a suit, so I will allow it.

If you’re wondering how this show is different from American Idol, Steve reveals the answer: “Tonight, one judge will lose one of their acts.” Not “One struggling singer will be stripped of the chance to win $5 million.” Nope. It’s all about the billionaire industry moguls (and Nicole). It’s like when you would listen to Casey Kasem’s “American Top 40,” and you would think, Enough of these songs. Why doesn’t Casey spend four hours explaining how the charts are tabulated, or talking to the wealthy label executives and record store owners? Not to get all Zuccotti Park on you, but this approach — at this particular moment in world history — is spectacularly tone-deaf.

Which brings us to our group number! Now, with the inclusion of InTENsity, Lakoda Rayne, and the Stereo Hogzz, the top twelve is comprised of 28 people. That’s a lot of mikes to keep hot all at once. (Do you like my industry lingo? Can’t help it! It’s in my bones.) So one suspects that this number will be lip-synched. And since they’re already going to the trouble, why not Auto-Tune the humanity right out of it? DONE. The gang mimes David Guetta’s “Without You” pretty well, until … doop! Leroy Bell’s part of the song starts, and for his whole first line, his lips are not moving and his mike is nowhere near his head.

The only person making live noise in the whole group is young Astro, who gets the mid-song rap breakdown we should probably just start getting used to. He immediately forgets his words, unless his words are “Huh puh teh. We ain’t together.”

That was fun! Now we’re moving along. Better stop the show for ten more minutes of recap. Last night’s highlights are cut up with some backstage moments, most notably Rachel Crow excitedly telling her mother, “They compared me to Michael Jackson, Mama!” I know Rachel is young, but she is aware that his is not a story that ends on a particularly high note, right? Moments like this are when I worry about Rachel Crow.

Would you like to talk about the importance of a Pepsi commercial for a very long time? The producers of The X Factor would. I don’t want to say it comes off forced when each of the acts reveals their lifelong desire to shill for Pepsi, but if you look closely, you can actually see the laser sights dancing on their temples. Marcus says, “Pepsi only chooses certain people to be in their commercials,” which is totally true! And here comes the act whose song is in the current Pepsi campaign: OUTASIGHT!

Yes! THE OUTASIGHT! The guy whose face I am seeing for the first time and forgetting all at once! The seriousness of this whole thing is finally hitting me: One of these twelve finalists will be the next OUTASIGHT. I’m going to need a moment.

The actual meat of the show is done very slowly. The acts who are safe will be revealed IN NO PARTICULAR ORDER until only two remain, and those two will have to SING FOR THEIR VERY LIVES.

But first, here come the acts who are safe IN NO PARTICULAR ORDER: Marcus Canty is safe! Drew is safe! Revealing those two things took up an entire act of this show, and I’m not kidding!

Leroy is safe, which proves that your parents are finally figuring out how to use their cell phones. The audio drops out for a moment as Nicole hugs him, so she for sure called him a “motherfucker.”

Astro is safe! IN NO PARTICULAR ORDER. Seriously, if you edited this 60-minute show down to just the pauses and Steve Jones saying “IN NO PARTICULAR ORDER,” it would somehow be 80 minutes long. Lakoda Rayne is safe! I don’t know anything about anything! Rachel Crow is safe! Chris Rene is safe! Josh is safe! Ooh — the four who are remaining includes Melanie Amaro, who is of course safe, but they are just going to torture the poor woman every single week.

Which leaves us with Stacy, the Stereo Hogzz, and InTENsity. Steve Jones tells us that the next … act … safe … is … and then he flies back to Wales to reconnect with his family for seven weeks and comes back feeling refreshed and then IN NO PARTICULAR ORDER STACY FRANCIS IS SAFE.

Paula is in “a nightmare situation”: One of her acts will be going home! After which she will go back to her house made of Darvon and hundred-dollar bills and nothing will be different in the least. Rich people nightmare situations are wonderful, wonderful stuff.

So: The Stereo Hogzz and InTENsity will both have to sing one final song, and then it’s up to the judges to decide who goes home. Good Lord.

The Stereo Hogzz do a version of Samantha Sang’s “Emotion,” which is notable for the lead singer’s tuxedo-jodphur thing and for the fact that the rest of the group is not bothering to pretend they’re not lip-synching.

InTENsity is next! InTENsity does “My Life Would Suck Without You,” and it’s kind of a mess, because there are ten of them and they are children and it is a high-pressure situation.

There is the American Idol–style montage of InTENsity’s journey, after which you would think at least one of them would have some final words, but no. When we return to the stage, every one of them is gone and Steve Jones says: “Well, InTENsity are inconsolable. See you next week!”

To review: The bottom two acts were the groups with the highest number of people, which may support my hypothesis that viewers can’t emotionally connect to more than one person in a show such as this. Or maybe America hates children and black men see you next week!

Can I tell you something? I’ve been looking forward to this, the first overstuffed results show of The X Factor. How will this show waste my time? What promotional tie-ins and stars-du-jour will they blast down my neck? Why am I this excited?