Heavens to Betsy. The departure of a couple of early favorites, furious judges, and a last-minute revelation of Christianity shocking enough to rival Insane Clown Posse’s. Tonight’s show has it all.

It begins, as ever, with the group number, which you have correctly guessed is “Man in the Mirror.” It’s alarmingly off-key.

Speaking of which … the more I think about The X Factor’s Michael Jackson night, the more bent out of shape I get. It’s not the singers; most of them did fine. It’s not even the producers; these are great songs, so why not build a show around them? It’s more that Michael Jackson’s story is one of the greatest tragedies of American cultural history, and we still can’t find a way to address it. Michael Jackson survived an abusive childhood to create some of the greatest music of all-time before fame, drugs, and his own distorted self-image alienated him from his fellow man and made his attempts to connect more and more self-destructive. Not only was there no acknowledgement of any of this, the show was a 90-minute-long advertisement for an actual circus. I’m not saying the show needed to be some Joan Didion meditation on the tragic nature of fame; just an 800-number for donations to a children’s fund would have done. Something. Say what you will about Yoko Ono, but she makes sure any John Lennon tribute stays on message and raises some charity cash. Tell the Jackson family you’re doing a Michael show, and their only response seems to be: “What time do you need Blanket in the makeup chair?”

The results start coming pretty much right away. The first singer to make it into the top five is … Chris Rene! Who is voting for this guy, exactly? Is the recovery community that loyal? Could he actually win this thing, by which I mean: Could we be putting a stack of thousand-dollar bills into the hands of someone who, at the beginning of this calendar year, was a habitual meth user? Something to think about. (But not really; again, the producers whiz right past it.)

Also safe … Melanie Amaro! She says the most sensible thing I hear all night, right into Drew’s ear: “Smile, girl.” Drew is having a terrible time.

Also also safe … Rachel Crow! So the four remaining singers, only two of whom will survive, are: Josh, Drew, Astro, and Marcus. They are shuffled backstage, where Astro offers this tidbit: “It’s no pressure. I’m swaggin’ it out. Brooklyn, yo.” Astro has a jib, and I like the cut of it. Drew looks like she is watching the last fifteen minutes of Marley & Me over and over. (Spoiler alert: Her condition will not improve.)

But let’s keep those four on ice for now, because it’s time for TINIE TEMPAH! I have seen this person’s name before, and I honestly thought it was some new kind of vegan dish. No, indeed: He is a British rapper who has just gone platinum in the States, despite having a quarter of Astro’s charisma. (But I guess he has an itty-tiny li’l temper on him? What is your name all about, Tinie?)

Back to the results. The next singer to join the top five is … Josh Krajcik! Good for him. This leaves us with Marcus, Astro, and Drew, one of whom got the lowest number of votes and will be going home immediately. And that person is … Astro! Shocking! And also not. Like I said yesterday, Astro had just about reached the limits of what he could do in this environment. I strongly believe he’ll have a recording contract before he gets back to his hotel. Best of all, he actually takes it gracefully. DOPE.

But this means Marcus and Drew must each SING FOR SURVIVAL. Drew is shaking and sobbing, while Marcus has the confidence of a man who’s been here before. I think I know how this is going to turn out. (Spoiler alert: I’m totally right!)

Paula’s surprisingly violent advice to the two of them is: “I want you to hijack this! And kill it!”

Drew’s Save Me song is Roxette’s “Listen to Your Heart,” and … it’s not so good. It’s your boilerplate Drew: faint piano, fluttery vocals. But she can’t get any breath behind her vocals, and she looks like she’s being tortured. She does, however, do a lap around the judges, as if to say: “Look. I am capable of movement.” Afterwards, she collapses blubbering into Steve Jones’s arms. He shoos her offstage and shoots the camera this priceless look: 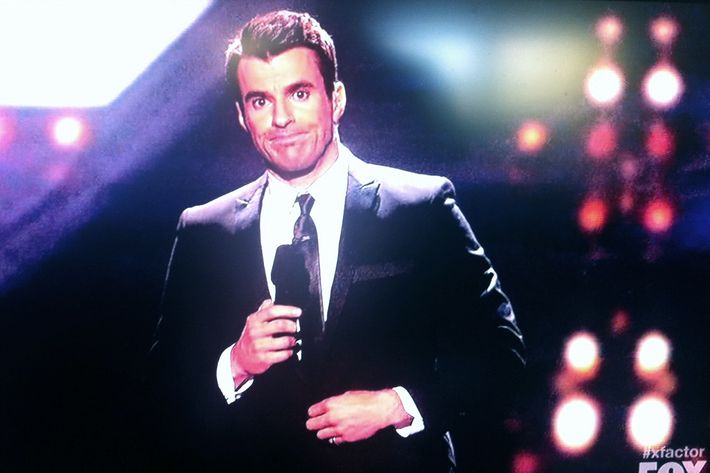 Marcus chooses “Neither One of Us” as his Save Me song, and he hijacks and kills it. Oh boy.

When we return from the commercial break, Drew is just openly wracked with sobs. You know, it’s easy to forget sometimes that she is a 14-year-old, but man, oh man — this is like a snuff film. L.A. votes to send her home; Simon votes against Marcus, no surprises there except how much time they eat up doing it. Nicole does a one-woman show about the relative merits of the two singers, which includes this classic: “Drew, you have a bright future, but you’re so young already.” Is she, Nicole? Is she already so young? Stop saying words, Nicole Scherzinger. After an eternity (I timed it), she votes against Drew.

Here’s what happens when you do that to a child: 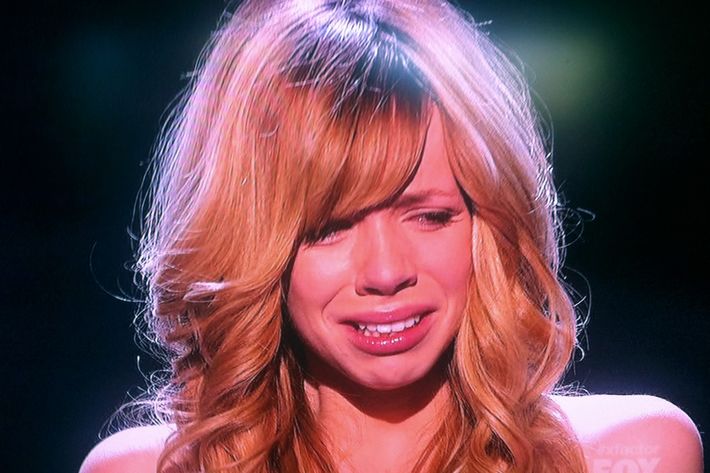 Paula admirably cuts to the chase and votes against Drew, so that’s that. She’s going home. And OH THE SOUND OF HER SOBS IS DEAFENING. She pulls it together enough to say: “I’m gonna keep going and I’m gonna keep singing and what I have to show you is a lot more upbeat!” Which, you know, is not the case right now, but fine. Steve attempts to get Simon to speak, and he gets the silent treatment. Exactly who is the teenage girl in this situation, Simon Cowell? Steve responds with Priceless Look No. 2. 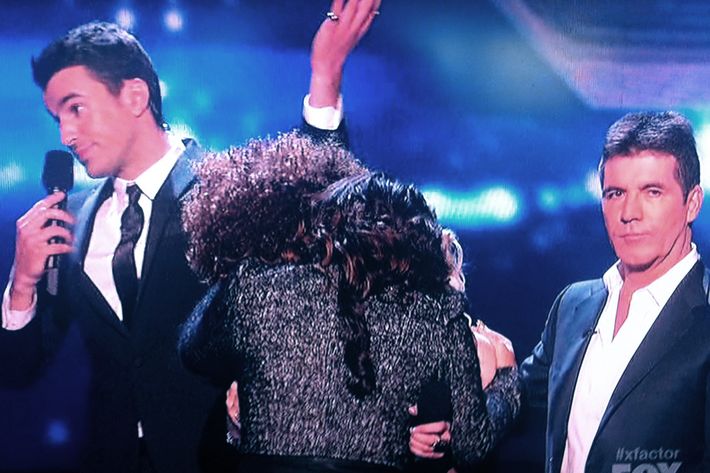 Returning from the In Memoriam package, Steve asks Drew if she has any final words, and … here it comes: “JESUS LOVES ALL OF YOU GUYS AND I HAVEN’T GOTTEN TO SAY THAT AND THAT’S WHAT I’M HERE FOR AND THAT’S WHAT I TRULY WAS IN THIS COMPETITION FOR AND NOW I’M SAYING IT.” Whoa! There is apparently a spot on that stage that causes people to bare their souls. Or maybe the heartbeat sound effect forces you to meditate on your mortality, which compels you to reveal yourself as Christian or Jamaican? Either way it is amazing and I want to stand there and see what happens. (Spoiler alert: I would get much gayer.)

So! Marcus lives to see another week, and the subset of the overwhelming Christian majority in this country who likes to think they’re a persecuted minority has a kicky new martyr. Lord have mercy.

The X Factor Recap: Don’t Stop Till You Get Enough Michael Jackson

how fortunate 25 mins ago
Apparently Matthew McConaughey Took Career Advice From a Fortune Teller He said he was stopped on the street and told to take a role in How to Lose a Guy in 10 Days.
overnights 9:01 p.m.
Ghosts Recap: The Ghost Trap 2000 Who ya gonna call when you need ghosts un-busted?
guestlists 8:34 p.m.
Which Celebs Love Ellen and Portia’s Love? From Kris Jenner to Prince Harry, here’s who attended the couple’s vow renewal ceremony.
prison 6:30 p.m.
Jafar Panahi Goes on Hunger Strike to Protest Detention at Evin Prison Panahi should have been released to await a retrial on charges stemming from 2009’s Green Revolution.
gender inclusivity 4:25 p.m.
& Juliet Actor Opts Out of Gendered Tony Award Categories “I felt that I had no choice but to abstain from being considered for a nomination this season,” Justin David Sullivan wrote.
overnights 3:24 p.m.
The Real Housewives of Miami Recap: A Tale of the Gringos If Alexia is going to pretend to be offended to get an apology out of Nicole, then at least accept the damn apology.
buffering 2:48 p.m.
Could Peacock Maybe, Finally, Be Having a Moment? The shows are clicking, but will it be enough for the struggling streamer? Content chief Susan Rovner is betting on it.
renewals 1:55 p.m.
The Traitors Triples Down on Mess With a Second Season and Andy Cohen Reunion Looks like Peacock has a reality-TV hit on its hands.
vulture 10x10 12:00 p.m.
The YHLQMDLG Puzzle 5-Across, Six Letters: 9-Down, Four Letters: Fletcher in Confess, Fletch.
into it 11:29 a.m.
Lil Rel Howery Supports the Academy’s Andrea Riseborough Investigation But she’s not the person he’d drop from the Best Actress race.
c(omedy)-span 11:26 a.m.
Roy Wood Jr. to Host 2023 White House Correspondents’ Dinner ﻿Hopefully, Comedy Central sees how good the Daily Show correspondent is at filling a role held by Trevor Noah.
grammys 2023 11:06 a.m.
The Grammys to Honor Hip-Hop’s 50th Anniversary With a Blockbuster Tribute Grandmaster Flash, DJ Jazzy Jeff, Run-DMC, Missy Elliott, Public Enemy, and dozens more will perform.
rock hall 11:00 a.m.
The Worst Snubs in Rock and Roll Hall of Fame History (So Far) Eight artists most deserving of induction.
By Joe Kwaczala
cancel culture 10:32 a.m.
If You’re Reading This, Your Favorite Show Is Canceled All the TV shows we’ve lost in 2023, including Reboot and Gossip Girl.
last night on late night 10:15 a.m.
Harrison Ford Reviews Jason Segel’s Penis He’s familiar with his Shrinking co-star’s body … of work.
overnights 10:00 a.m.
Poker Face Recap: You Can’t Kill the Revolution Irene and Joyce’s murder is pretty badass to watch — like if The Golden Girls joined Fight Club.
role call 10:00 a.m.
Debbie Harry Answers Every Question We Have About Videodrome The Blondie legend on the “sticky” consequences of dyeing her hair, how James Woods annoyed David Cronenberg, and her work on Tron — whatever that is.
trailer mix 9:44 a.m.
Perfect Match Is Squid Game for Dating Netflix’s most famous singles will take matters into their own hands February 14.
explainers 8:00 a.m.
What the Great Netflix Password Crackdown Means for You Let’s talk about it.
making it 8:00 a.m.
Jen Beagin’s Novel About Sex Therapy Sparked a Hollywood Bidding War She was a waitress at 47. Now, her book Big Swiss is being adapted by Jodie Comer for HBO.
More Stories