Over the weekend, NME reported on a poem (allegedly written by Hov himself) that suggested Jay-Z would no longer be using the word bitch in his music. (The relevant lines: “Before I got in the game, made a change, and got rich / I didn’t think hard about using the word bitch / I rapped, I flipped it, I sold it, I lived it / Now with my daughter in this world I curse those that give it.”) The authenticity of this poem is perhaps not totally verified (as in, it’s likely a fake. Update: his reps have even denied it!), but Vulture likes to be prepared for worst-case scenarios, and so we immediately went into overdrive, trying to calculate how this decision would affect Jay-Z’s performance options. Yes, calculate: We did actual math! (At Vulture, math is very loosely defined as anything that involves numbers and charts.) Below, the results of our very involved research to find out just how many times Jay has used bitch in his songs, and which songs are affected most. (We should also note that we weren’t the only people to attempt this bitch counting, and it turns out that numbers, or Rap Genius, are very flexible.) Anyway, to the findings!

Of 289 songs on which Jay-Z was listed as the main artist (per Rap Genius) or an equal collaborator (i.e., on Watch the Throne), bitch or a variation thereof appeared 355 times. On average, that’s 1.2 bitchs per song.

Only Jay-Z’s top-five bitch-iest songs make it into double digits:

“99 Problems,” which is arguably Jay-Z’s most famous bitch-related song, doesn’t make the top five — not even close. It only comes in at four bitchs. 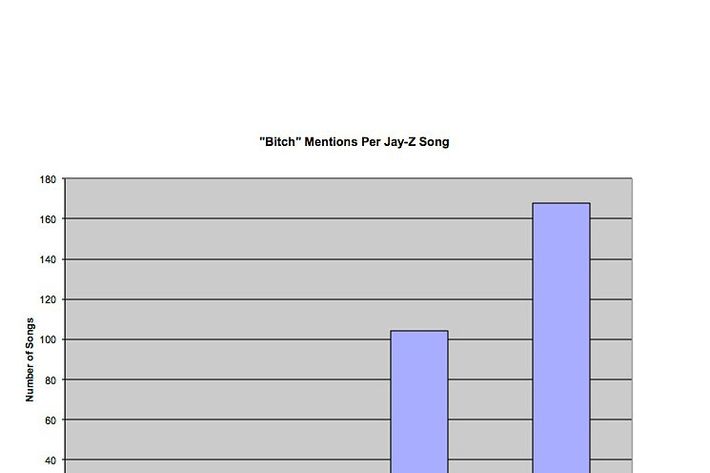 Most often, though, Jay-Z doesn’t mention bitches at all: Bitches are absent from a whole 168 of his songs. So when Jay-Z raps that of his 99 problems “a bitch ain’t one,” that’s only true about 58 percent of the time. 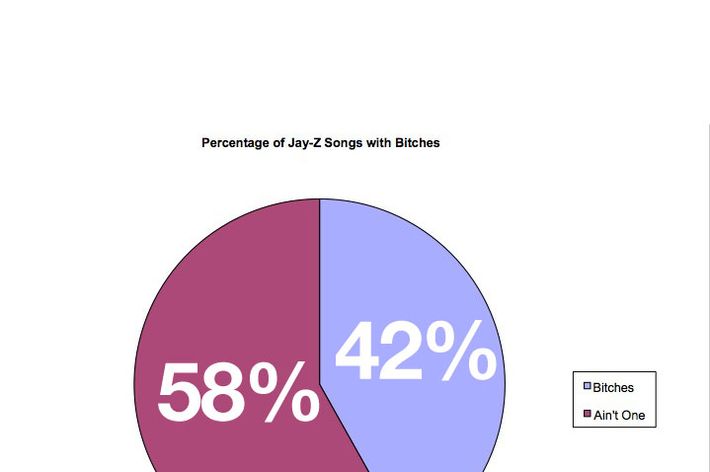 a long talk 6 mins ago
How Gillian Laub Shot Her Way Through the Trump Years The photographer was horrified by her family’s support for Trump. So she turned her camera into a “mediator.”
By Jillian Steinhauer
babies 20 mins ago
Jeannie Mai Jenkins Is Having a Baby With Husband Jeezy “I can definitely say that our Real fam is growing …”
the law 22 mins ago
R. Kelly’s Sex-Crimes Trial Nears Its Bitter End The prosecution has rested, and the defense case is already a mess.
disrespect the classics 1:20 p.m.
Eric Clapton Must Be Miserable Tonight, Because He Broke His COVID Tour Mandate He previously vowed to never perform at a venue that “discriminated” against unvaccinated people.
tv review 1:13 p.m.
The Emmys Need to Watch More TV In a television landscape undergoing explosive growth, the TV Academy isn’t looking far or wide enough.
trailer mix 1:07 p.m.
Despite its Title, The Worst Person in the World Trailer Doesn’t Have Jeff Bezos Starring Renate Reinsve.
streamliner 12:57 p.m.
Roku’s New Streaming Devices Promise to Be Faster By 30 percent, in fact.
wakes 11:30 a.m.
Biz Markie Had Exactly What Hip-Hop Needed Rap’s pioneering “Clown Prince,” as remembered by his friends, family, collaborators, and admirers.
By Drew Fortune
where's the beef? 11:20 a.m.
Machine Gun Kelly Tried to Come for Slipknot at Riot Fest He dissed the band for “being 50 years old, wearing a f*ckin’ weird mask on a f*ckin’ stage.”
renewals 11:16 a.m.
Virgin River Will Run for Two More Seasons at Netflix Starring  Alexandra Breckenridge and Martin Henderson.
trailer mix 11:15 a.m.
Watch Kyle Richards et al. Get Menaced in the Halloween Kills Trailer Starring Jamie Lee Curtis, Judy Greer, and the resilience of IP.
obits 10:55 a.m.
Comedy Actor Anthony Johnson Dead at 55 He was known for roles in Friday and House Party.
trailer mix 10:14 a.m.
Finch Trailer: Tom Hanks Gets an Apocalypse Emotional-Support Dog In the Apple TV+ original, out November 5.
hello 10:07 a.m.
Adele Shoots, Scores an Instagram Confirmation With Rich Paul The singer-songwriter and NBA agent were first linked in July.
movie review 9:58 a.m.
Let Nicolas Cage Guide You Through the Madness of Prisoners of the Ghostland In Japanese director Sion Sono’s eye-popping postapocalyptic Western-samurai-sci-fi epic, the actor gets to play hero, villain, and clown.
By Bilge Ebiri
overnights 8:00 a.m.
Reservation Dogs Recap: Unfinished Business A finale full of difficult conversations and decisions caps off a spectacular and revelatory season.
emmys 2021 1:31 a.m.
Debbie Allen Accepts Emmys Governors Award With Tearful, Timer-Defying Speech “Honey, turn that clock off. I’m paying no attention to it.”
highs and lows 12:50 a.m.
The Highs, Lows, and Whoas of the 2021 Emmy Awards A deafeningly bland, very white return to normalcy.
emmys 2021 12:15 a.m.
Conan O’Brien Was the Troll the 2021 Emmys Needed What are they gonna do, take his show away?
emmys 2021 12:03 a.m.
That Queen’s Gambit Guy Refused to Be Played Off at the Emmys Read the room, Scott.
More Stories