The trailer for Jennifer Westfeldt’s Friends With Kids, an ensemble romantic comedy about a woman (Westfeldt) and a man (Adam Scott) who decide to have a baby together without actually getting together romantically, just came out last week. The poster for the film arrived today, and it has its work cut out for it. (You can see the full-size version below.) Though Westfeldt and Scott are the romantic leads, the cast is chock-full of other actors, some of whom are quite a bit more famous than Westfeldt and Scott. Jon Hamm (Westfeldt’s longtime, real-life boyfriend) and Kristen Wiig co-star as a couple who can’t keep their hands off each other; Maya Rudolph and Chris O’Dowd as frazzled, but loving parents; and Megan Fox as the woman Scott’s character thinks he might love before, presumably, he realizes he’s been meant for Westfeldt’s character all along. The poster for Friends With Kids is trying to do what all movie posters are trying to do: Sell the movie. Who, of all these folks, would be most likely to do that? The poster is basically a cheat sheet for which cast member Lionsgate thinks is the most famous, and thus the biggest box-office draw. So, who does it think is most famous? Let’s take a look at the poster to see the Adam Scott–dissing results!

Here is a rundown, in order, of who gets the biggest, best treatment from the Friends With Kids poster:

1. Jon Hamm. He’s not the star of this film, but his is the face that’s going to sell it. And really, who can argue with making his handsome mug as big as possible?
2. Megan Fox. After Hamm, her face is the largest. Unlike the rest of this TV-centric cast, she’s a movie star — and a nice-looking one at that.
3. Kristen Wiig. Her image is just a smidge bigger than Westfeldt and Rudolph’s, but she does get pride of place — your eye goes to her first — as she should.
4. Ed Burns. Huh. His picture trumps Rudolph’s because she’s got a glass of wine covering her face, and he doesn’t. This must be to gender balance the poster, because otherwise it makes no sense.
5. Maya Rudolph. Getting unfairly beat by Burns, but otherwise, holding her own.
6. Jennifer Westfeldt. Though it has lousier placement, her image is about as big as Wiig’s and Rudolph’s. Fine, she did write and direct the thing.
7. Chris O’Dowd. Smaller than everyone before, which makes sense, as he’s pretty much only known in the U.S. for playing the love interest in Bridesmaids. And yet, he is still significantly larger than …
8. Adam Scott. Or we think that’s Adam Scott? We can barely tell, his face is so tiny! Guess being adorable and charming in everything he does, not to mention being the male lead in this film, could not secure him an image taken from any closer than, oh, 100 yards. Maybe next movie, Adam Scott, you can be as famous as Chris O’Dowd! 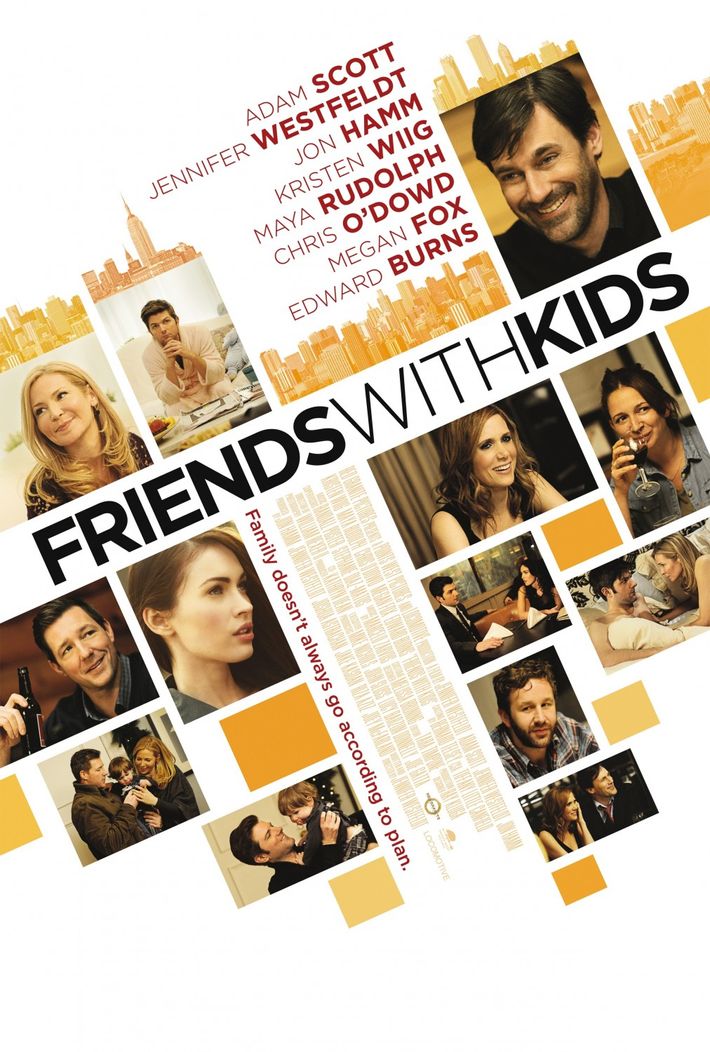