Rejoice, everyone! The Academy has released the “class photo” from this year’s Oscar luncheon, the annual midday event that attempts to gather as many nominees as possible before the actual Oscar ceremony itself. Not everybody could make it (miss you, Kristen Wiig!), but the photo is still a great panorama of this year’s talent, as well as a blessedly un-Photoshopped document of stars awkwardly standing next to nerdy sound design guys on a perilous set of bleachers. In that way, it’s almost the opposite of those perfectly composited Vanity Fair covers that also come out around this time, and it gives us plenty to discuss. Let’s dig in!

Frostiest trio
Somebody, tell a joke! Anyone! 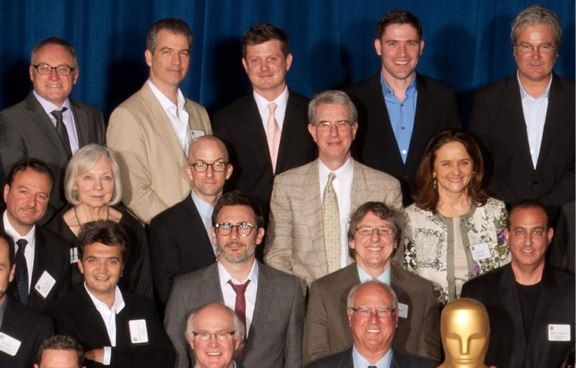 Can you spot the Oscar-nominated Community star in this section?
Your favorite NBC sitcom isn’t currently on the air, but at least you’ll see Jim Rash and his bald head at the Academy Awards this month. Rash, an Oscar nominee for cowriting The Descendants, plays the dean on Community … and for once, he’s not the most ridiculously attired man in the room! 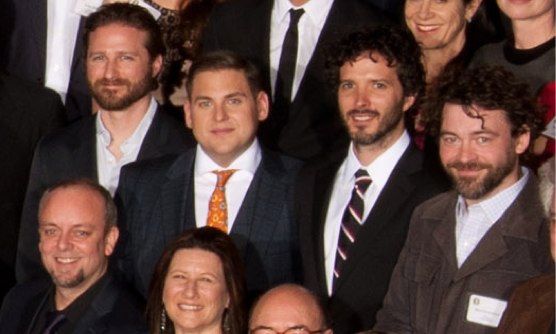 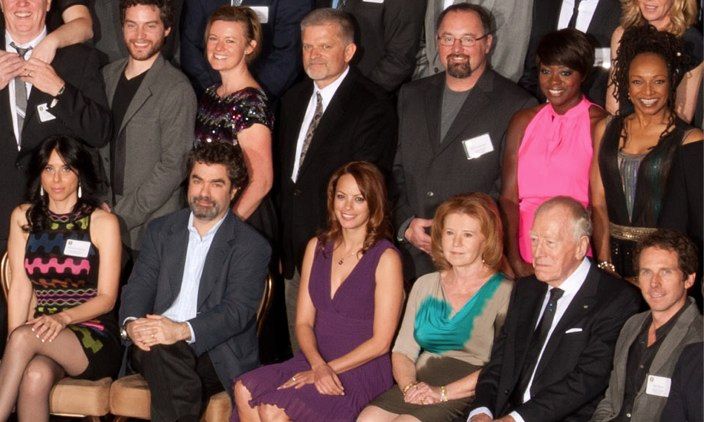 Most Stylin’ (Female)
Every woman in this section looks pretty great! Obviously, that electric pink frock on Viola Davis pulls focus, but what about that slinky gal on the left, who looks like she should be the breakout star from one of the East Coast franchises of Real Housewives? If she needs to stage a catfight with Berenice Bejo, we’ll provide the empty restaurant, game night, or daughter’s wedding!

Hey, it’s the old man from Up!
We don’t mean any harm by this, Martin Scorsese! But if Steven Spielberg attaches a hundred colorful balloons to your eyeglasses, then assumes your Best Director slot after you float into the clouds, don’t say we didn’t warn you first. 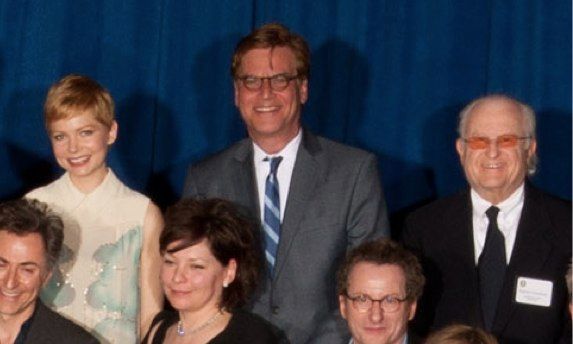 Orange is the new black!
Everyone who’s anyone amongst the nominees is working orange in some fashion. Whether it’s Michelle Williams with her reddish-orange hair, Aaron Sorkin with his reddish-orange hair and skin, or the other guy with the glasses who maybe saw Sean Avery’s tinted specs on Project Runway All Stars last week and crowed to his wife, “I have an idea,” it’s clear that orange is tops … 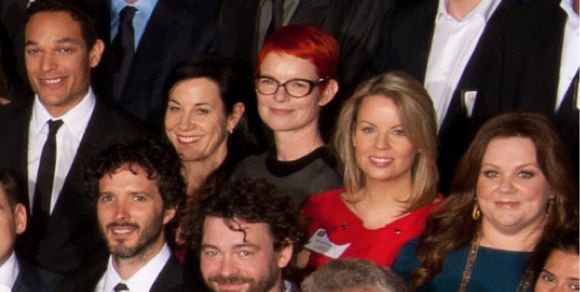 But nobody did it better than this woman and her hair.
Please win the Oscar, whoever you are. If you need to put leopard spots up there, we approve. 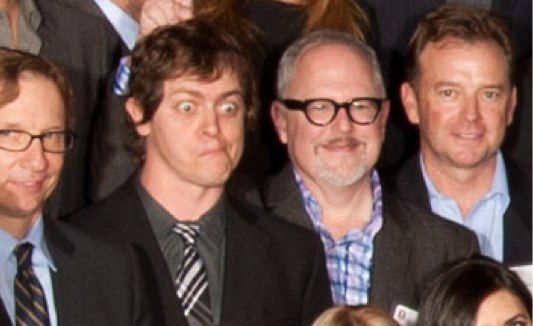 hardware 1 min ago
The New Roku Remote Has a Fancy Apple TV Button The move underscores Roku’s importance in the streaming universe.
profile 8:00 a.m.
Esther Perel Goes Off Script She became today’s most famous couples therapist by ignoring all the rules of the trade.
american idol 1:59 a.m.
Paula Abdul Wishes ‘STD’ Simon Cowell Could Have Joined Her American Idol Return Abdul joked about missing her “super, talented, debonair” former costar while filling in for current host Luke Bryan.
apologies 12:37 a.m.
Hank Azaria Wants to ‘Personally Apologize’ to Every Indian Person for Apu “It’s important. I apologize for my part in creating that and participating in that.”
movie theaters Yesterday at 10:02 p.m.
L.A.’s Beloved ArcLight Cinemas, Pacific Theatres Will Close Permanently “Despite a huge effort that exhausted all potential options, the company does not have a viable way forward.”
hulu Yesterday at 8:37 p.m.
Michael Cera Makes Life & Beth Decision to Join Amy Schumer’s New Hulu Show His first on-screen series regular role since Arrested Development.
casting call Yesterday at 7:30 p.m.
Lucy Liu Joins Shazam! Sequel as Helen Mirren’s Villianous Sister The role she was born to play.
the law Yesterday at 7:24 p.m.
Harvey Weinstein Has Lost 4 Teeth in Prison “He is almost technically blind at this point.”
the talk Yesterday at 4:53 p.m.
Sheryl Underwood Says Sharon Osbourne Fight Was ‘a Trauma’ on The Talk’s Return “I didn’t want to be perceived as the angry Black woman, and that really scared me.”
obits Yesterday at 4:42 p.m.
A Man Named Earl DMX was a once-in-a-lifetime rap genius who saw hell on earth.
By Craig Jenkins
chart updates Yesterday at 3:53 p.m.
Silk Sonic Charm Their Way to No. 1 With ‘Leave the Door Open’ While Olivia Rodrigo notches another top-ten debut.
the industry Yesterday at 3:00 p.m.
Will Smith Movie Emancipation Will Not Shoot in Georgia Over Voting Restrictions The runaway-slave movie is one of the first to leave the state, a popular location for shoots.
series finales Yesterday at 2:15 p.m.
Frank Gallagher Met the Most Shameless Fate Possible “We tried to find some way to make it Frank-like and fun.”
oscars 2021 Yesterday at 2:00 p.m.
The Oscars Just Did a Cast Reveal for its Presenters Regina King, Bong Joon Ho, Halle Berry, Zendaya, and more.
free joy Yesterday at 1:19 p.m.
Macaulay Culkin and Brenda Song Welcome Their First Child Together Dakota Song Culkin is named in honor of the actor’s late sister.
the drama Yesterday at 1:05 p.m.
All Truth No Lie, Real Housewives of Beverly Hills Season 11 Looks Dramatic “What’s wrong with being fake and phony sometimes?”
trailer mix Yesterday at 12:56 p.m.
Uzo Aduba Is In Treatment for the Season 4 Trailer Zoom therapy isn’t easy.
respect the classics Yesterday at 12:52 p.m.
How ‘Your Wildest Dreams’ Finally Gave the Moody Blues the ‘Ecstasy of Success’ “It did set me on a particular kind of personal journey, which I would advise anybody else against doing.”
By Devon Ivie
school of scot Yesterday at 12:03 p.m.
What Have We Learned from Men in Kilts? It’s no new season of Outlander, but for eight weeks, Sam Heughan and Graham McTavish’s road trip through Scotland gave us the next best thing.
adam mmmmkay? Yesterday at 11:22 a.m.
Adam McKay Calls Aaron Sorkin ‘the Right-Wing Version of Me’ “I would say Sorkin is slightly right of center.”
More Stories