This week on The Bachelor, we’re down to the final four, which means hometown dates and Ben awkwardly meeting the families of the cutthroat contestants he’s chosen. Yep, Lindzi, Kacie, Nicki, and, especially, Courtney, didn’t just beam down to Earth in a poof of spray-tanner. They have parents and siblings and terrible couches just like the rest of us.

First off, the hometown dates are the best, because you get to imagine the begging and crying and full-on family fights that occurred when the potential contestant, who, at the point she was asking, had very little chance of actually making it to the episode on which Ben and America would even meet them, first approached her family about going on TV. Also, unlike the contestants, the families aren’t made over or media trained. In fact, the families of Bachelor and Bachelorette contestants are some of the only people on reality TV who do not really want to be on reality TV at all. Which makes them awesome.

First, Ben goes to Lindzi’s family’s horse farm in Ocala, Florida, where they ride horses and Ben falls in love with Lindzi’s dad, who does indeed seem pretty cool. Lindzi opens up to Ben about her ex-boyfriend, and Ben finds great meaning in the fact that her parents were married at City Hall in his current hometown of San Francisco, the site of he and Lindzi’s first date. Ben likes that Lindzi is “grounded” and “humble” and that her parents are salt of the earth. He doesn’t mention their kickass house and horse ranch, but I’m sure he thinks about that too. There is no drama or tension whatsoever. They kiss.

Next, Ben heads to see Kacie in her hometown of Clarksville, Tennessee. She meets him at her high school football field, accompanied by a full marching band, going to surprising lengths to confirm our suspicions that Kacie is one of those people who peaked in high school. They sit in the stands, and Ben opens a totally time-and-place-inappropriate bottle of wine while Kacie tells him that the football field is named after her grandfather. She also drops a hint of what’s to come when she tells Ben that her father doesn’t drink, adding that “we’re in the Bible Belt!” “I thought we were in the bourbon belt,” says a disappointed Ben.

After pre-partying at the high school, Ben and Kacie take their base-buzz over to her family home, so that her parents can ruin her life. 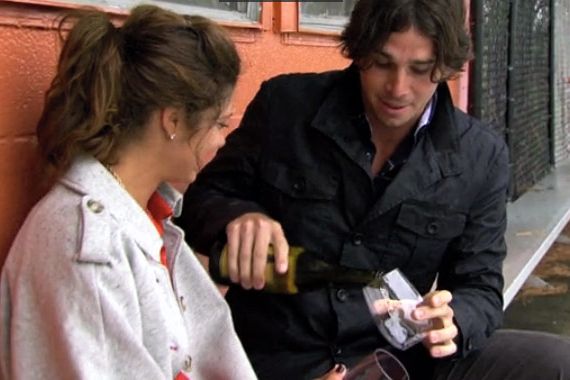 Before we get into that, though, it is important to mention that Kacie’s mom is, like, 30, tops! I don’t know what she’s putting on her face, but we all deserve to know about it. She looks like a 27-year-old Bushwick hipster who went full-mom at a Tacky Christmas Sweater party.

Anyway, she’s terrible for Kacie’s chances, because she tells Ben that she’s watched the show and knows that the couple usually lives together after it ends (but only for like four months, because then they break up! ha!). And she would not be comfortable with Kacie living in sin. Uh-oh. And then the dad is so much worse, going on and on about the sanctity of marriage and outright suggesting that Ben break up with Kacie in order to keep her from being hurt. Then, privately, the dad tells Kacie that if Ben asked for her hand in marriage he would “probably say no.” Ouch. You know how sometimes on this show, one of the contestants says that her or his family “wasn’t comfortable” with the spotlight, and so he or she takes the Bachelor or Bachelorette back to his or her awesome loft, where they meet their dog or their best friends or something instead? Yeah, Kacie should have done that.

Then it’s time for Ben to visit Nicki, whom I call “Ugh, Nicki” because she’s so boring and all she ever talks about is her failed starter marriage, in Fort Worth, Texas. They buy cowboy boots, and Ben says, “Do you know how long I’ve wanted a pair of cowboy boots?” as if Amazon.com doesn’t exist, and then they drink in a bar. Ben has a boring, supportive time with Nicki’s boring, supportive family who don’t want to see her get hurt again because of her recent divorce, blah blah blah. As he leaves, Ben says in voice-over, “Today there were moments where I looked over at Nicki and said ‘I love this girl!’” They kiss.

And now, here we are, meeting the people who made Courtney, in Scottsdale, Arizona! (The show saved her for last because of course.) In voice-over, Ben references his Moment of Clarity in Belize when he saw his past, present, and future come together atop the Mayan temple with Courtney, while Courtney muses that she feels bad for treating the other girls the way she did. Then it’s time to meet the parents, and, as mentioned last week, Courtney’s father does indeed look like a generic old white rich guy from an eighties comedy, and he heartily introduces himself as “Rick Roberts.” Which is strange, because his daughter’s name is Courtney Robertson! I guess maybe there was already a model named Courtney Roberts or something.

I think the most revealing part of Courtney’s family meeting was when she and her sister were in a side bedroom (with a huge modeling pic of Courtney on the wall, btw!), and it was clear that they are close and that they totally love and confide in each other. And Courtney kind of defers to her sister even! Which would not seem possible for the Monster Courtney we’ve seen on this show so far. So there is a real person in there somewhere who has apparently been hurt by other men and has finally found a nice guy! What is happening? This show needs Bad Courtney!


Courtney’s dad gives Ben a speech about how “he always tells young people in [Ben’s] position” that “marriage is the biggest gamble in life.” Ben comes away from the whole thing feeling like the version of Courtney he sees around her family is the same way she is with him, and that that’s a good thing.

Then it’s off to a park, where (surely with the help of the production), Courtney has arranged for Ben and herself to have a little fake wedding ceremony. If marriage is the biggest gamble in life, Courtney’s fake wedding idea is the biggest contestant gamble in Bachelor history. I mean, she makes Ben write VOWS. And then recite them before a bemused older man of indeterminate religious status. It’s basically that thing where the contestants are always wearing white dresses as a “subtle” suggestion to the Bachelor of what they would look like as a bride, but times a thousand. They even drive off in an SUV decorated with “Almost Married.” This girl has balls! But when you think about it, Courtney knows Ben is crazy about her and that the only thing holding him back is his worries (planted by the other girls) that she might not be in it to marry him. So having that fake wedding was a genius move on her part.


Back in Los Angeles, Ben recaps everything to Chris Harrison, and Kacie gets the rose ceremony boot and is sent back to Clarksville to presumably rebel against her strict parents by starting a meth lab. Or at least twirl her baton silently around the backyard for a few weeks.

Next week: Lindzi, Nicki, and Courtney helicopter around Switzerland with Ben, where a mystery woman will show up and cause Ben to say “Holy [long curse word]!” Also, next week is the week that they all get the chance to bang Ben in the “fantasy suites”! Get excited!

The Bachelor Recap: When Your Family Ruins Your Chance to Be a Princess; or, Courtney, Humanized