Here at Vulture, we try to be honest and transparent with you about our obsessions. You know how much we are anticipating Steven Soderbergh’s male stripper epic Magic Mike, which is potentially the most important film made in the United States since Birth of a Nation. You know that even though we understand that Snow White and the Huntsman is clearly the “better”-looking of the upcoming Snow White films, we are perhaps even more excited about Mirror Mirror, because what were they thinking? But we have been holding out on you, Dear Reader. There is another obsession shared by everyone at Vulture HQ, a superstar of tomorrow who dominates our daily office chatter, and we have been remiss in keeping him to ourselves. Reader, it is time to do a deep-dive on Woola, the insane dog-creature from Disney’s upcoming megabudgeted sci-fi vehicle John Carter.

What is Woola?
According to Encyclopedia Barsoomia, Woola is “the pet calot of John Carter and his family. A great, ugly beast, Woola once served as a guard-dog for the Tharks at Korad.” Whatever that means! Here is the most important part of this wiki-summary: “Carter, in a little experiment, wrapped an arm around Woola’s neck and began to stroke his ugly head as one would stroke the head of a dog. Woola, who’d never before experienced kindness, felt an immediate love for the Earthman, and thereafter became his loyal hound.” His loyal hound! With Uggie on the way out, it’s clear that we need a new cinematic dog-thing to obsess over, and after sampling Woola’s loyalty, reaction shots, and off-the-charts levels of ugly-cute (smashing records once set by David Schwimmer and Lip from Shameless), we’re certain that this Calot will fit the bill.

Look at what he looks like!
Disney’s got an uphill battle with selling John Carter: There’s nobody all that famous in it, and its plot — a man helps save another race, falls in love with a princess, and has adventures — has been picked over by countless other movies and books since Edgar Rice Burroughs first started writing John Carter stories one hundred years ago. Also, though the film takes place on another planet, it kiiiiind of looks like it was set in New Mexico, or even Utah. Leave it to Woola, then, to do all the heavy lifting as the film’s most distinctive visual element. The creature design as a whole in the movie is appreciably goofy and almost childlike (many of the aliens look like they could be dropped into an all-animated Pixar movie with little or no tweaking), but Woola’s the most distinctive, with his rough-hewn exterior, kooky skull-nose, ten separate feet, and highly expressive need to be loved.

This is potentially the most disturbing Woola video you will ever see, and we can’t stop watching it.
For the movie’s wrap party, a Woola cake was made. And then … consumed. Warning: If you press click on this video, you can never go back to who you used to be.

Woola Valentines!
What better way to commemorate today, the first day of Vulture’s official Woola Watch, than with some Woola Valentine’s Day cards? Send these to your crush, your true love, or your harried Disney postproduction supervisor, and watch the cartoon hearts float out of their heads! (Incidentally, we would really like to see cartoon hearts float out of Woola’s head in the movie. It’s not too late to add that, guys.) 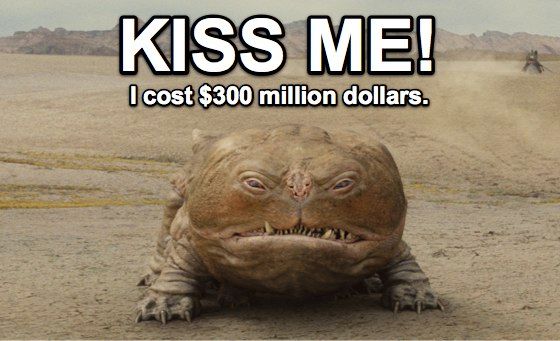 Why We’re Obsessed With Woola From John Carter